This is a shill piece. I want to be up front about that. I own what to me, at this point, is a significant chunk of RUNE, which will become the native token of a project called THORchain once it launches. Just so you know up front, I'm totally biased.

But this is also a story about never quitting, having an ABR (Always Be Researching) mentality, and just being confident in your ability to do fundamental analysis. A lot of people who invest these days rely almost exclusively on technical analysis, which in my mind is the modern day equivalent of reading tea leaves. You know, anybody can do it. You just dump out the morning tea pot remnants out on to the table and make some predictions on what you "see." These days, charting is free. Research is free. Twitter dudes, and shameless guys on this platform whose name begins with an H and ends with an N, all will tell you that they know the secret.

F that. Technical analysis, fondly referred to by its proponents as TA, is now part of the efficient market. The tooling is so sophisticated. The knowledge is so prevalent. Anybody can do it. So you can't really find much alpha there. Or at least, I can't. I know some people who claim to have had success using TA to make money, but I've never seen confirmation of that via their records. In almost every case, they would have made more money if they had just bought low and HODLed something like LINK, which at one point they had a lot of but probably were convinced by some ill-fated "tea leaf reading" to get rid of it with the idea that they would "buy back at lower lows."

Well, I am what I am. And that's a straight up fundamental analysis (FA) guy. No TA for me. I never seem to generate alpha using that. And besides, trading the minutiae of tea leaf movements takes a lot of damn time. I'd rather be writing, researching, drinking a relaxing beer or building a castle with my daughter. That's just me. You can do you. But FA is what works for me. 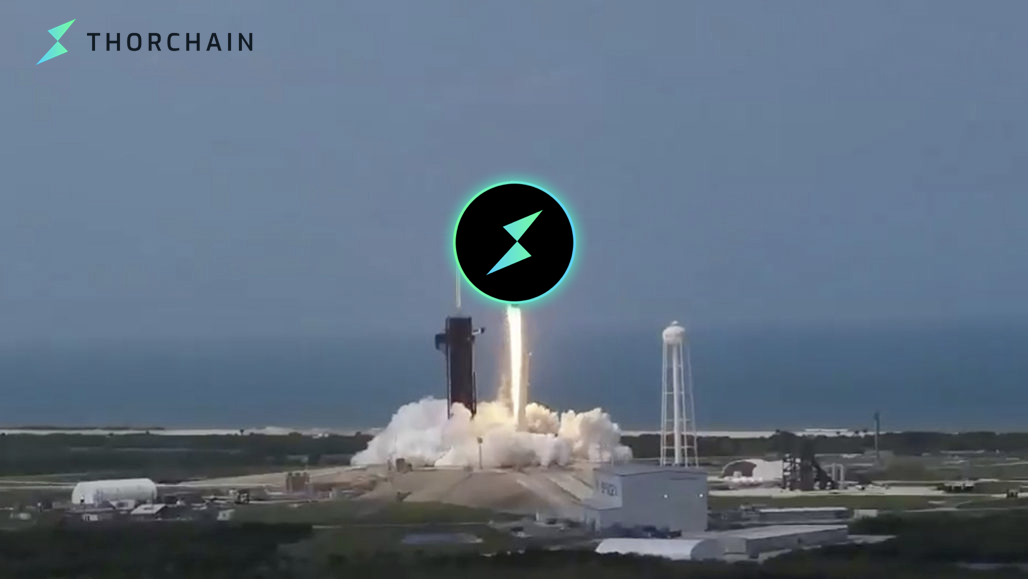 This thing is on a freaking moon mission. I've written about ThorChain (RUNE) before on the LEO:

So how did I find this hidden gem? I'm not a genius. It's just my job to know everything there is to know about decentralized finance (DeFi). In order to do that, I have to read read read read read everyday everything that comes out in the space that's new. My followers here may know that I'm a big fan of the token economy of Synthetix, so when I read about a Synthetix/Thorchain partnership that put me down the crypto rabbit hole. If you've been in crypto any amount of time, you know about the rabbit hole.

It's that feeling you got when you first realized, "Oh, so like Ethereum is a world supercomputer that anyone can access!"

Or that time when you were like, "Oh, so bitcoin is sound money that is like the opposite of USD. It's value is designed to only go up in the long run!"

I was like, "Oh, so ThorChain is like Uniswap, except that 1. It has its own chain. 2. It has a token! 3. It's gonna be cross-chain. 4. It's built on Tendermint so the gas fees will be really small!"

I mean, there's a lot more to it than that. It's quite a deep rabbit hole. But that was enough to get me going. And I'm thankful I did. At the time, I was working for a project that was going nowhere fast. I tried to get them to implement some of the innovative strategies that ThorChain employed to engage their community while they were building the magic bus, like RuneVault, where you can currently stake your RUNE and earn a 36.4% APY denominated in... that's right, more RUNE! That project eventually did get that going but 6 months later, long after I had left the project.

I was looking for strategies that could be applied to that project, but what I quickly realized is that I should be putting significant chunks of my meager salary into RUNE.

I'll be writing more about ThorChain (RUNE) in the coming days and weeks, so please DYOR and, if you come across any questions, post a comment here.

Yep, it was worth it to invest in anon devs :)

Well, I know it sounds sketch. But they have very good reasons for it, which I've explained elsewhere. And literally everything else about the project is super transparent!

Fully agree. I bought in for exactly this reason. If the token moons even better :)

I have also been accumulating each time I see a correction in price. Glad that I did.

I know, right? Why is it so hard to convince teams to do the right thing?!? What I usually hear is something along the lines of "Nobody else does it, so we don't do it. Show me another project that does it."

Then I show them the ThorChain. And they go, "Show me a real project! One not based on memes."

Hopefully, this price discovery moment for RUNE will start convincing teams to be more transparent.

In for 1300 RUNE so far. We'll see if the price dips and I get filled on my lower bids.

I don't think you'll regret it. Of course, I could be wrong. But I'd be willing to bet that, barring some kind of macro event, we'll be seeing $1/RUNE before we see $.10/RUNE again.

There's just too many funds, too many influencers, and too many people that have finally taken notice on this last run.