Yield farming entered the crypto consciousness this week as the total value of assets locked up under DeFi protocols exploded past its pre-COVID high and will soon hit $2 billion. As I've said before, I think this number is going to hit $10 billion by the end of the year.

That's basically due to a concept called Yield Farming, where crypto capital moves from one opportunity to another seeking to maximize short-term yield. This "stick and move" process has the potential to be a rising tide that lifts all boats in this space. I anticipate this "hot money" to move around from platform to platform as they introduce their liquidity mining schemes, thereby increasing the AUP on that platform, attracting more capital, some of which will stick as permanent capital, the "hot money" moves to its next target, the process repeats, and so on. There is an incredible amount of latent capital locked up in the cryptoverse that has no way of earning a yield. As those token holders get "red pilled" on the potential risk-adjusted returns of DeFi, that capital is gonna move... into DeFi. There will be more yield farmers, some with modest garden plots and others with Nebraska-sized industrial operations. In a sense, we'll be returning to our roots. I'm not sure if you've been paying attention to what's been going on in DeFi Land this week, but some pretty amazing stuff has been happening. Sometimes I forget just how new this stuff is to most people, even those people who have gone down the rabbit hole on Bitcoin and Ethereum already. I've spent the last 16 months of my life researching and steeping myself in decentralized finance, DeFi, and I've written about it often. To me, composability or "Money Legos" makes complete sense. To me, a protocol-based governance token being worth money based off its assets under protocol (AUP) makes complete sense.

But for others, they are just hearing about it today. That's all thanks to Compound, which introduced its COMP governance token and the concept of "liquidity mining" to the world this week.

What is liquidity mining?

If you've read my article from earlier this week then you know the basic idea: Protocols form the basis of DeFi. The governance token of any protocol is how future development is decided. Thus, the number of assets governed by that protocol plays the biggest role in determining the value of that governance token.

We are seeing anywhere from 1x-4x AUP valuations on governance tokens these days. There's that whole complication in crypto caused by the circulating supply debate. What exactly is "locked" and how can we confirm it? That kind of thing clouds the picture. But that is the range. Let's say it this way: If you see a DeFi governance token with a fully diluted market cap trading beneath its current AUP, that's a helluva bargain!

Well, "liquidity mining" is a grand way to distribute those governance tokens to the public. Instead of having a public ICO to distribute tokens throughout the community, the engineers behind the protocol incentivize the community to contribute assets to the protocol, which raises community awareness, stress tests the entire system, and in turn brings more capital to a more robustly designed ecosystem. It's a win win win for everybody. The team and private round investors can liquidate some of their tokens to reward themselves for what they've built (they probably still have a lot locked away or vesting). A liquid marketplace builds up around the governance token. And in the end, hopefully, people start actively contributing code, marketing and governance proposals to the platform, all of which should beget more growth.

If done right, it's a lovely positive feedback mechanism. So how does one start yield farming?

Well, in essence, it's fairly simple: Just through your savings denominated into one of the stablecoins that Compound supports (DAI, USDC, USDT) onto Compound using Metamask. Spend the ETH gas to supply your tokens to the protocol et voila! You are now earning whatever variable interest rate that the money market protocol has assigned that asset for that block. As I type USDC and DAI pay out almost nothing, while USDT yields 9%. So, of course, you should swap your stablecoins into USDT using a stablecoin mixer like Curve or mStable, right? Well, yes and no.

The reason for the difference in yields on these stablecoins at the moment is that USDT has no reserve ratio or collateral ratio. The reserve ratio is an amount that the protocol holds back from the lender as kind of an insurance fund, which increases the yield for the lender because Compound does not take any of the interest from lending out the asset for its reserves. The collateral ratio is an amount that you can borrow against. DAI and USDC can be borrowed against, so they have value in this sytem. And if you borrow USDT, currently at 15.2%, yeah, you might be paying a helluva lot of interest, but the asset is likely not going to move against you AND you maximize your COMP incentive earnings by paying a high interest rate because COMP is pro-rata distributed according to the interest accrued by borrowers and lenders 50/50 every block. You can read about this process here.

Right about now you should be asking: Why do I want COMP? The answer to that is simple. IT'S TRADING AT $200 per COMP token. That's a 10x increase in a little over 4 days.

That makes quite an incentive to add assets to this protocol, no? This week Compound's AUP increased from around $100 million worth of assets to more than $685 million at the time of writing. That's insane. Nobody thought this would work out this well. Not even Robert Leshner, the founder of Compound Labs that developed the protocol, could have guessed things would have gone THIS well. But here we are.

The first couple of governance proposals post-COMP distribution have targeted USDT. If you don't know already, USDT is widely used in Asia and it dominates the stablecoin market like Google dominates the search engine market. People have their issues with it but so far, it is a de facto standard. So it makes sense that it was the first token on Compound to get heavily "yield farmed" - which basically entails increasing the AUP and then borrowing back those assets so that both the savings yield and the borrow rate is extraordinarily high. That prompted the community to propose an increase in the reserve factor, mind you without any increase in the collateral factor. Remember that crypto diehards HATE USDT.

So what did the "hot money" do? Well, they just moved to another asset. 😂 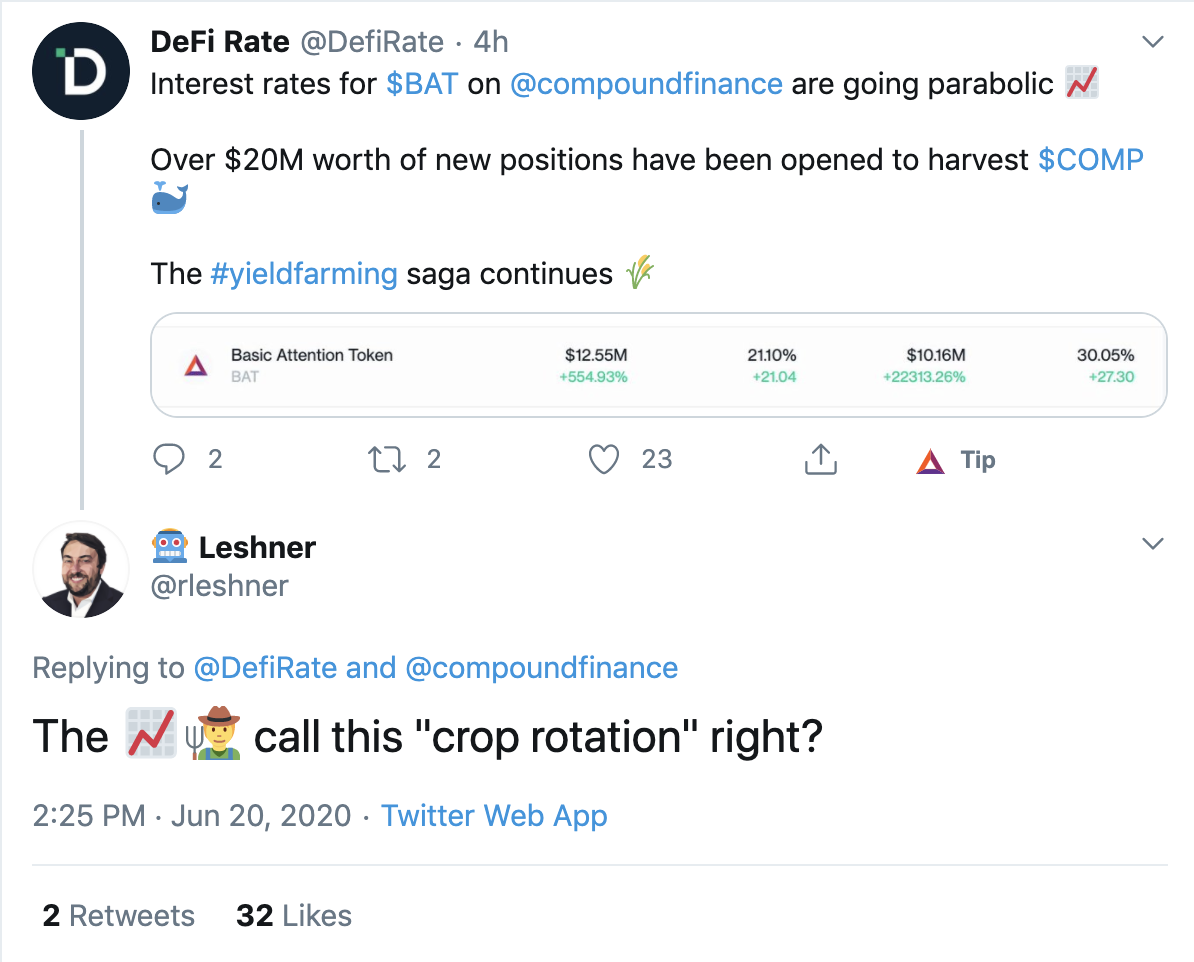 The saga continues next week!

Good post on liquidity mining/yield farming. While Compound brought attention to this, Synthetix is probably the OG of this concept. I think liquidity mining has the potential to bring about a bubble as big as the ICO bubble. Just imagine more hot money FOMO'ing without understanding the actual risk. The next "crop" on Compound should be ZRX judging from the interest rate 😀

This post has been manually curated by DeFi Campus. The first writing contest from DeFi Campus is now ongoing. Consider participating to win some HIVE :)