Mainstream Adoption of Crypto and Blockchain

rmsadkri in LeoFinance • 5 months ago

There has always been debate about the mainstream adoption of crypto and blockchain. It is always confusing for me how to understand and confirm that the blockchain and crypto is accepted at large.

The idea of adoption is there because the number of people and institutions involved in the crypto space are considered not to be at the full potential of the technology. It means the technology is considered to be at the nascent stage of its development. There is still a long way to go for this technology as both the critical mass of users and the number of applications are being developed. The pace of development is rapid but it is still not up to the mark compared to traditional technologies.

At this point, it is not easy to visualize how the blockchain technology could be utilized going forward or what for. We know that the technology is currently linked with the traditional financial sector and many are predicting it to disrupt the existing financial system. Metaverse and NFTs are the other two products that stormed into the traditional market. Not to forget DAOs, which turned out to be the power behind crowd funding. These are the very few examples of what could be done with the technology in hand but nobody knows how exactly it will manifest in the years to come.

The shitpost @edicted posted a couple of days ago was mind provoking, in a way. After the read, I kept thinking about the mainstream adoption of crypto. It is really important to understand what the mainstream is and how will that happen if it is sure to happen. There could be many indicators or signs that would suggest adoption. I think there are two aspects that I would consider key.

This is really important. Yes, we have many dApps and supporting infrastructure that are helping users to interact with the blockchain technology. There are institution level crypto interaction agencies and there are retail users’ level apps that support crypto application related to traditional finance like AAVE, Maker and Curve.

In addition to the existing Dapps and handful of infrastructure, a massive jump in the number and quality of infrastructure is required to handle the potential migration of users into crypto space. For that, there should crypto DAOs as big as Google and Facebook hiring the best talents out there in the market. I don’t know how that would look like but I think the DAOs should be big enough to influence users and market all over the globe to signal mainstream adoption. 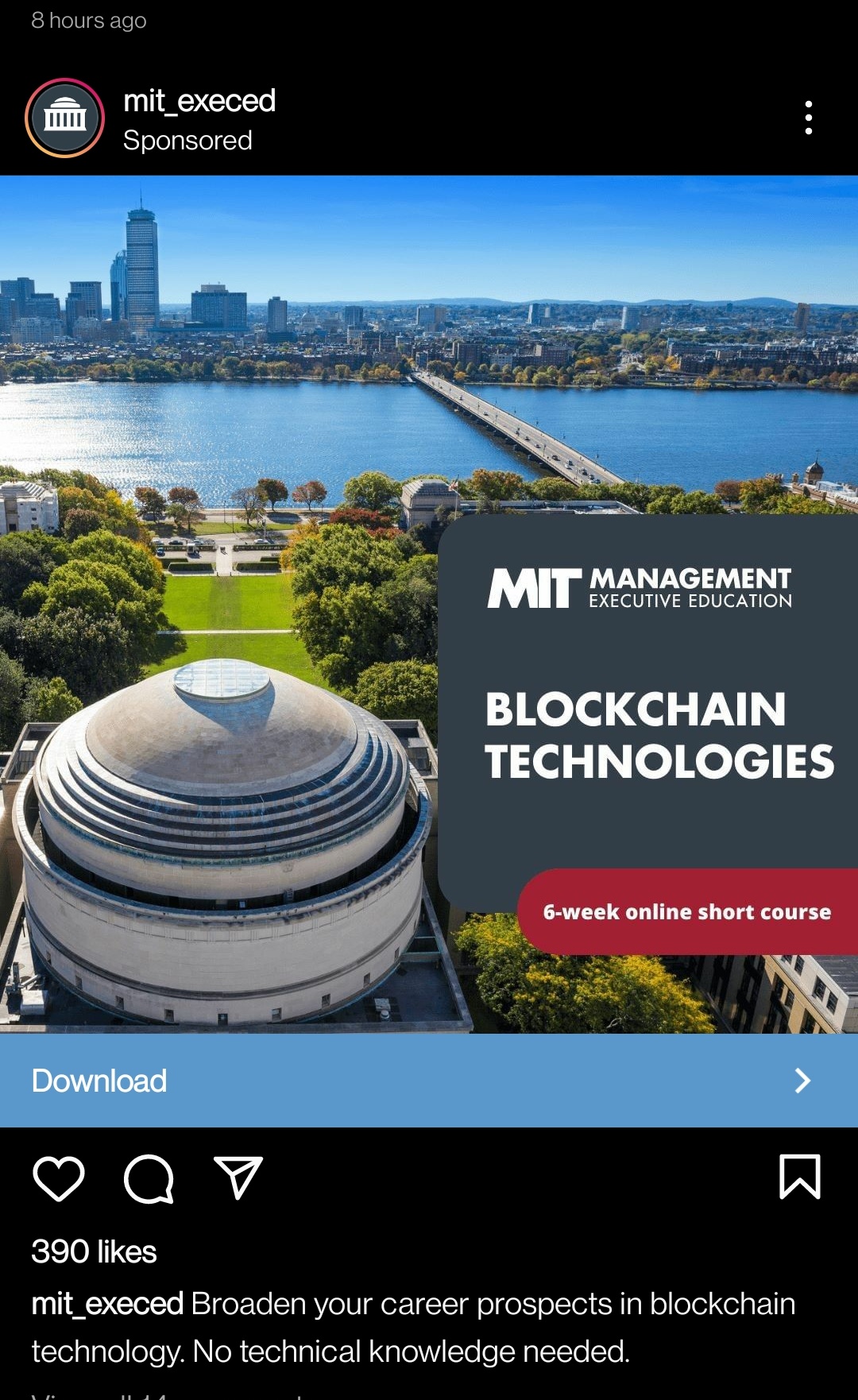 In my view, crypto education is also the other signal of mainstream adoption. I came across this ad on my Instagram page which suggest MIT is offering a degree in blockchain technology. The ad suggests applicants do not require technical knowledge to join the course. I wonder what they teach in that course but it is significant to have a reputed organization allowing individuals courses in the tech. I am also aware that the organizations are tapping into market interest to earn and grabbing that opportunity by both hands. Still, that is significant. I think the mainstream adoption would be at prime when the option to study various aspects of crypto industry – not only programming language- is accessible and prevalent.

There could be many other indicators to suggest the adoption. Please feel free to add to the list what the smartest of minds on Hive think.