revisesociology in LeoFinance • 4 months ago

You may well know that Britain is facing an energy crises, mainly due to soaring gas prices, and when the current energy price rise cap is lifted in April this year (which prevents energy companies from passing on costs to consumers, even if it means they go bust, which many of them have!) then this could mean the number of households falling into fuel poverty increasing by 50%, to 6 million households.

The CRAZY thing about all of this is that all of this is made a lot worse by something very BASIC - lack of adequate insulation in much of Britain's housing stock, much of that being Britain's neglected social housing.

Britain, in fact has the least energy-efficient housing in Western Europe, which in turn is due to the lack of government lead investment into making housing more energy efficient compared to all other Western European nations. The UK, and especially England have the lowest per-capita expenditure on energy efficiency: 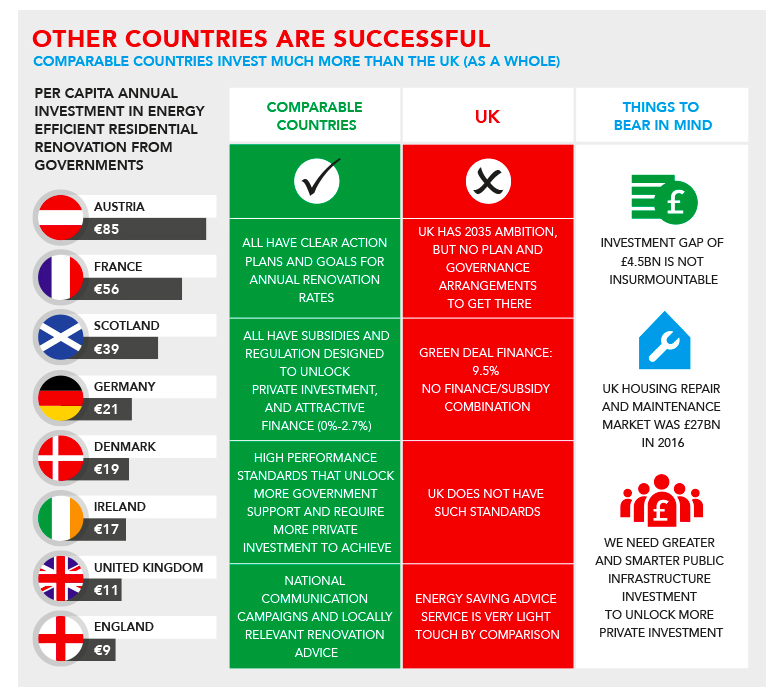 And to make matters worse, the amount has DECLINE drastically in recent years...

The infographics above are from the Energy Efficiency Infrastructure Group (the name alone is enough to get yer juices flowing, I know!) who campaign for the government to invest more on energy efficiency....

Their number crunching suggests that there is a £ 4.5 BILLION annual investment gap, but only £1 bn of government money a year would be required to unlock a further £3.5 BN of private investment, and with that level of sustained spending over the next 13 years, that could save the average household around £300 a year in energy bills, which is a cool 30% off the current average spend. 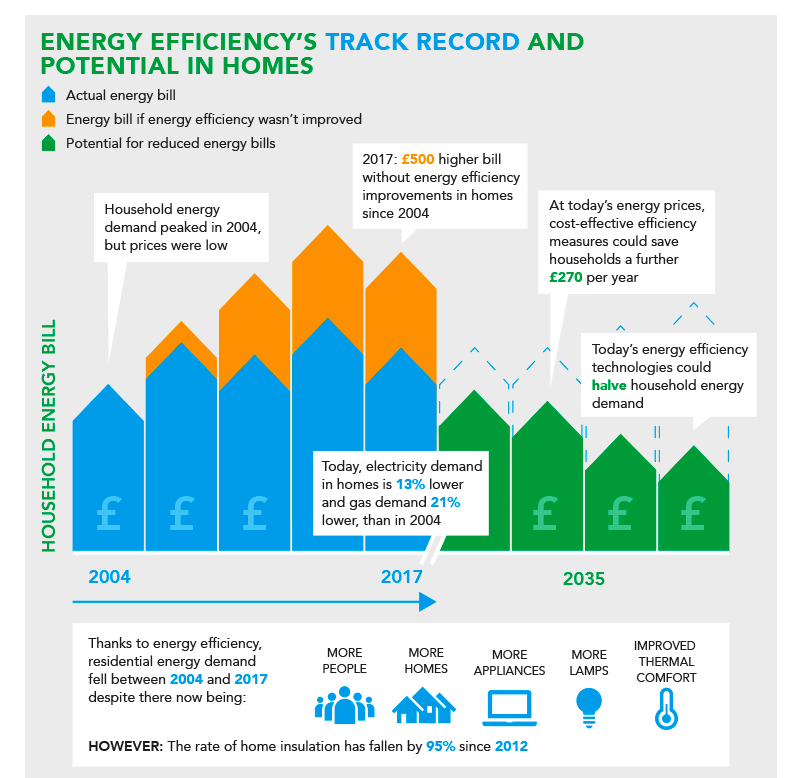 The aggregate SAVING per year amounts to around double what the investment is, and that's going forwards several years.

A good use for public money?

And certainly where social is concerned, if my taxes are going to pay for such things, they may as well pay for decent quality housing if it's only going be another 5% extra on top.

However I'm not so sure how this would work with private housing - maybe insulation-specific very low interest long term loans with a small (10-20% subsidy would be a decent option for housing which is poorly insulated...

Either way this strikes me as one of those areas of life where markets just aren't going to solve the problem - that of poor quality housing leading to poor people spending more on energy, and using more energy.

That does no one any favours. personally I'd rather my taxes went on improving the housing stock so poor people don't have to literally waste money on the basics, I'd rather they used it to lift themselves out of poverty rather than wasting our resources!

Of course something else to keep in mind is that the EEIG is basically campaigning for the government to spend money on the industries it represents, but to be fair I think they've got a point!

The rental market is a part of the problem. I don’t know about the UK, but in the US many rental contracts specify that utility costs are borne by the renter. So the property owner has no real incentive to upgrade energy efficiency.

That is a fair point! Sadly the same seems to hold true with social housing, owned by government agencies!

I would not be surprised if the housebuilding lobby persuade the government not to raise standards on house insulation to maximise their profits. They probably couldn't raise the price much to compensate, but the owners would make the money back over the years anyway. So much of our housing stock is ancient and so is really inefficient.

I found some stats that show domestic energy use is decreasing. That may be due to upgrading of housing stock and more efficient appliances. It's still a fair chunk of the national total. We need to be improving matters wherever possible, but vested interests may think differently.

Oh it was probably lobbying, there was quite a drop off in investment a few years back, but i think some of the newer builds are much better.

It's such a waste not making housing as energy efficient as possible - we can have almost completely passive heating for most of the year in the southern part of the country you know.

We're no where near that!

People who pay their own heating bills are pretty good about investing in insulation. I am not sure why the government needs to be involved in this at all.

It's because the bottom 25% of the population in the UK have zero extra money to spend on anything other than food and bills, always playing catch up.

People use the poor to justify government giveaways ... but the poor rarely receive the benefits.

Instead there is a disgusting class of middle class left-wing grifters who get there ugly snouts on the government teat to suck the benefits away.

The richest people I know all made their money by grifting off government programs. The poor people I know work sixty to eighty hours a week paying taxes and live like slaves because of the grifters.

Quite - the worst example of this is subsidies for solar panels - which you tend to see on houses worth over half a million in wealthy suburbs.

This is one of those things that makes such a difference, the investment has so many benefits, that you wonder what illogical reasoning govt has to not do it. It helps poor people, it helps the environment, it generates spending which helps the economy. And energy efficiency is SUCH easy pickings when it comes to environmental stuff with the impact it will have. But of course, your government and mine both have their priorities on backward when it comes to spending, but that's a different rant. ;)
Also, I've been in a poorly insulated home in winter and HOLY CROW it is not pleasant.

I agree, it is something of a no brainer to prioritise it.

I'm in an uninsulated house now, but being in Portugal it doesn't matter that much!

It was 18 degrees out today!

It's 14*C here today, which is like, crazy for January in Colorado, but I'm not complaining. We do need more moisture, though, I shudder to think what wildfire season is going to be like this year.

Oh yes you had it really bad last year if i remember correctly, just be prepared!

I have an air purifier now, which I only got at the end of last year's season and it made a huge difference, so at least I won't be wheezing all summer. I'm in the city proper so not too near the mountains or grasslands. But we already had a huge fire NW of me in December where a ton of people lost their homes and I know some animals and I think a few people died. :(

That does no one any favours. personally I'd rather my taxes went on improving the housing stock so poor people don't have to literally waste money on the basics, I'd rather they used it to lift themselves out of poverty rather than wasting our resources!

Agree on this, but it has to be regulated, and educated. If the government grants a certain sum, the capital gained by the saving needs to be reimbursed to let's say 90% to make it appealing or needs to be reinvested in a different insulation measure. Like one changes the windows, the heating system can be subsidized or in that direction.

Yes I agree, but in the grand scheme of things it's a relatively easy thing to plan for, it just requires a long term Vest commitment - it's probably one of those things that suffers from 5 year terms.