If you haven't heard, we released an update that shows Market History for the last 24 hours of Hive Punks.

Now that all the Punks are sold out, I want to share some data about the distribution.

The first thing I want to talk about is the type distribution. This is basically what you would normally consider races. As you can see, the majority of types are Human. Clowns were predictably the next common type coming in with 65 out of 10,000 followed by Zombies with 39 out of 10,000. Apes were setup to come in some where around 20 and did exactly that.

The rest of the types were designed to be super rare and show up 0-5 times and they all did that. In fact, one type never showed up, demon. 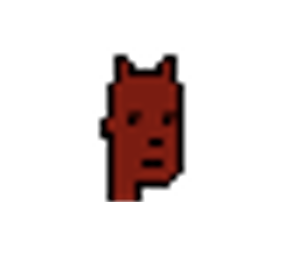 All the other types showed up pretty much as expected. The fact that every Punk was generated on the fly when a mint was requested, there was no way to control "minimums" so every type and accessory would how up. THis showed itself with the head/hair accessory category where one of my favorite accessories the Rasta hat didn't roll for anyone. One of the earlier images from the beta shows what the Rasta hat would look like.

I released some initial distribution data prior to the launch of Hive Punks showing some potential outcomes based on the weights. 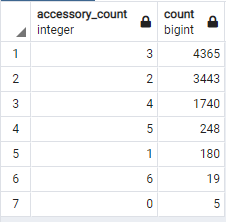 The majority of Punks have 3 accessories, while this seems to be better than 0, 1, or even 2 accessories, by setting the common accessory count to be higher allows for more variety in the final Punks and prevents most of the duplication that would happen. It also makes most Punks a lot more interesting.

One of the less desirable outcomes (0 attributes) actually ends up being a more unique and rare Punk in the end as there was only 5. The most desirable is 6 atttributes with only 19 Punks having that many. Interestingly there are 9 unique attribute/accessory slots, only 8 were possible but 7 & 8 was so rare there was a good chance they wouldn't show up. I was hoping for 1-2 7 accessory Punks but the odds didn't allow it to happen. During my dry runs, there was a 50% chance for a 7 accessory Punk to show up, but 8 never did.

One of the easter eggs in the distribution was females with facial hair. These were designed to be super rare, but due to the lack of cross rarities doesn't technically affect the rarity score. To do so would have been far more computationally difficult. 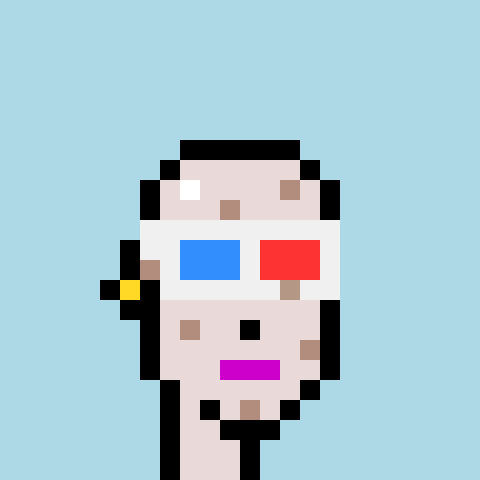 Spots for example with 3D glasses end up with a pixel sitting on top of the 3D glasses making it look more like mud spattered on their face than spots. Typically when these unexpected errors happen, it increases the demand for these pieces. It is clear this has already started. Once the sorting/filtering update is launched, it will be easier to find these outcasts and collect them if that is your desire.

With only one type of nose (Clown) this attribute was greatly reduced with only 206 out of 10,000 Punks having a Clown Nose making them relatively rare.

Necks also had very few options, 3 on male and 4 on female resulting in the majority of Punks (9,728) not having neck accessories. 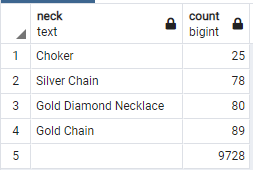 One of the more interesting pieces of data is the rarity distribution, this is best represented with buckets. As you can see only 8 Punks had more than 5,000 Rarity score, making them the most desirable of the bunch. There are 15 3000-5000 Rarity Punks, and a bulk of the Punks are under 250 Rarity. Only 9 Punks were under 70 rarity, something that @pfunk picked up on and has started to try to collect.

Overall I am very happy with the distribution, I would have loved to have seen a 7 attribute Punk and at least one or two Rasta hats. My favorite accessory (Bubble Gum) ended up showing up 17 times, the higher side of it's predicted outcome.

Went to https://punks.usehive.com/markethistory and [email protected] is buying everything. Hivepunks will be very expensive in the future .

Is there any way to get the price history to show all the history ? Would be good to see the ATH sale up there etc.

I bought some favorite hive Punks.

Thanks for the stats and great to see the price history info up.

Are you telling me that my 69 rarity punk is my most valuable card?

wow that's some cool stats :)
I think this worked out perfectly.

Kind of sad that Demon didn't show up but it's part of the game :D

wouldve been cool if one had showed up!
My current profile pic is one of the 19 '6-attribute' punks which im pretty happy with except that the smile AND the mole are both hidden by the beard. sigh

We are brother 6 attribute punks.

oh nice! Yours is way cooler though with the pipe and sunnies. Whats the 6th attribute? I can see the hat the burns and the earring....

I have a hidden mole.

I minted nothing cool sadly :(

I look forward to the option to see what we have listed on the market. As it is now I have to scroll and look for the change price tag.

I can't wait to buy more of this punk on my wallet because Soon is going to bull more.investing on it now,is the best.

A nice over view and history of how you expected it and how the randomness really worked out in the end.

I've got a Santa hat punk with a clown nose. How many are out there? 🙂

Thlis might be a question you have already answered (and, if so, apologies), but will there be more Hive punks? Maybe a second, similar project? Hive Kitties?

There will be no more Punks by me using similar assets. I am working on other NFT projects though.

Exciting! I look forward to it. I will have to be quicker next time!

Can hardly wait for the filters to come out. That's when the real fun begins.

Wow, amazing work! But where is information about my laser eyes 😭

Interesting outcomes I checked mine with goggles and cant find any blemish spots. The market looks insane. I am really looking forward to those filtering possibilities.

Loving the updates! Now that floor is getting swept !PIZZA

Congratulations @punksonhive! You have completed the following achievement on the Hive blockchain and have been rewarded with new badge(s):

Amazing work with the Punks, I wish I knew about them sooner, by the time I found out they had all sold out! Wish I could've tried my luck at a mint, will you be bringing any more NFT project to Hive? would definitely be interesting in getting myself a PFP NFT Finally.