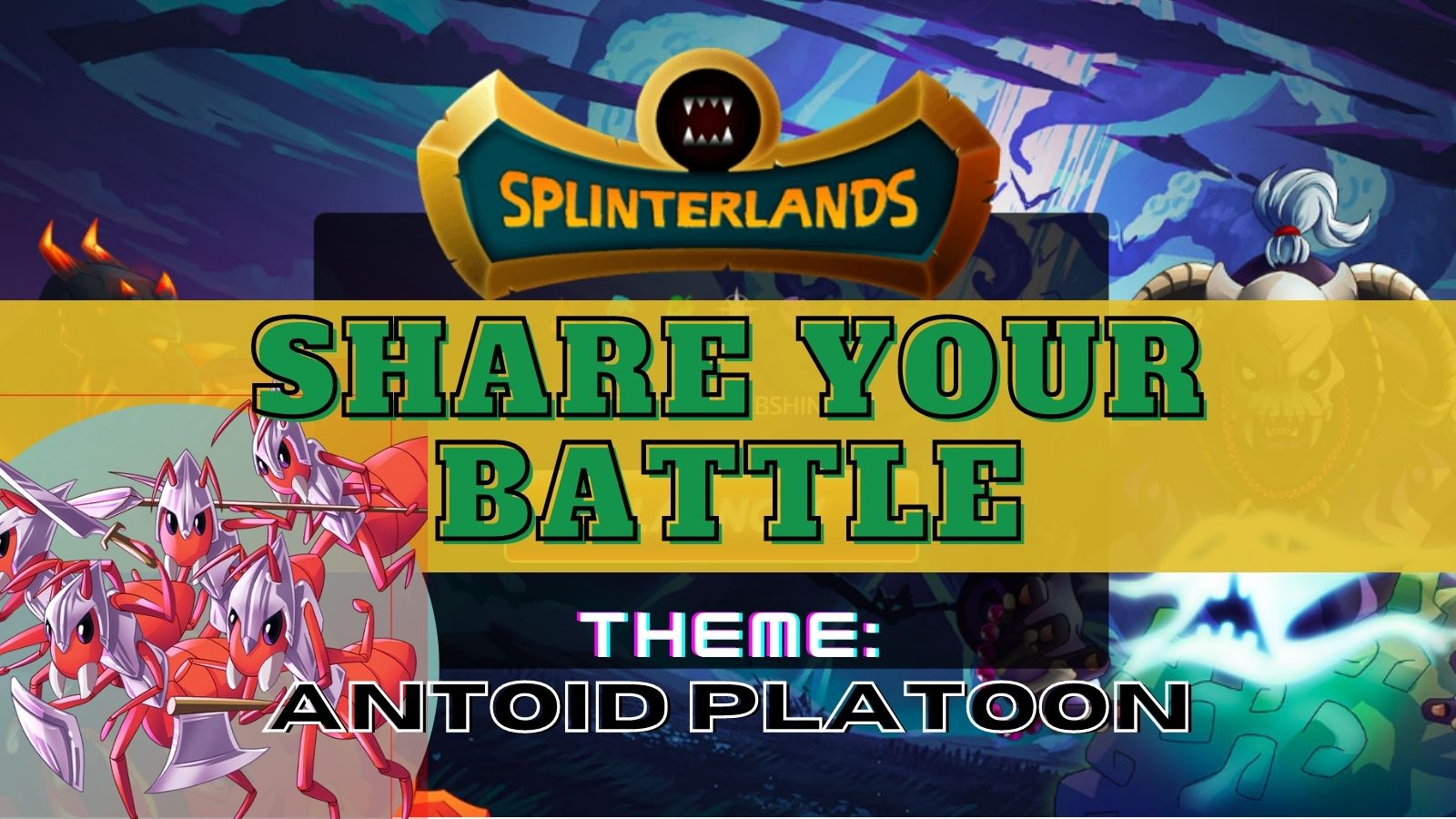 The end of the week is almost upon us and I can already see it waving on the far side corner of tomorrow. And you know that it's time for another article showing our skills in building a lineup and scoring a win.

I know that getting a win in Splinterlands is a tough thing to do nowadays especially if you are just using the free base cards available on the game. But a challenge is issued every week that makes it even harder and makes it more fun at the same time.

For this week's Share Your Battle challenge, the themed monster is the Antoid Platoon.

The Antoid Platoon is a Fire Splinter monster that comes from the latest Chaos Legion edition of cards. It's the perfect example of a team working as a single unit. I can imagine that they are the result of anarchy in the ant kingdom when the Ant Queen opened her door for any male ant. They are a group of virgin ants that came together and wanted to take on the challenge by sheer number because they are no match for the jocks if they fight for the Queen individually.

And with that, I built a lineup surrounding the Antoid Platoon.

First up, is the Living Lava.

By the way, I used Tarsa as my summoner. I wanted to have that extra HP and that additional "oomph!" for my melee-type attackers. The Living Lava is one of them. This has been my go-to tank monster for Fire Splinters. I also chose this one to sorta protect the little heroes of this battle, the Antoid Platoon which comes in second place.

First time I used this monster was as a tank. I thought that it could be a tank monster when the mana allocation for the battle is very low. It only costs 4 mana points and it has 3 HP and 2 armor points. That's prettt decent for a potential tank in low mana battles. It also has the Shield ability that reduces damage taken from enemies.

I decided to go with a dual-tank build here so I could last long in the battle.

The third monster on my lineup is the Serpentine Spy.

The Serpentine Spy starts the parade of attackers and it hides safely behind the dual-tank combination of the Living Lava and Antoid Platoon. It can do its bidding while staying safe from frontal attacks. It's also a perfect partner for Antoid Platoon in low mana battles because it also requires a minimal amount of mana points.

The second attacker which is on my fourth position is the Fire Elemental.

One of the nastiest attackers in the base Fire Splinters. It's a ranged-type attacker with a special ability of Blast. It hits an enemy and surrounding enemies at the same time. Together with the Antoid Platoon, they could be a deadly 1-2 punch. The Fire Elemental stays away behind attacking the enemies while the Antoid Platoon chages forward to take the heat.

The last monster is the Tenyii Striker.

This complete my pretty balanced lineup. Safely hidden behind the double wall of Living Lava and Antoid Platoon, the Tenyii Striker sneaks up behind the enemy lines and attacks the monster on the backline.

With my lineup complete I pressed the button and rolled the dice of fate.

I was faced with a fellow Fire Splinter lineup. I'm not sure, maybe he's also trying to do the theme battle. But whatever the reason is, it's my chance to showcase the true power of the double-tank build.

The lineups on both sides were revealed and it was clear that he wasn't trying to do the Splinterlands theme challenge. There were a couple of scary looking monsters from the Neutral ranks on there too.

The exchange began and I was so glad to see that my fierce frontline is holding its ground. They keep the monsters at bay while my attackers go for the kill. What do you think? Did I win this match?

You can find out by clicking this link here and watching the in-game replay:

Or if you're too busy to be inside the game, then you can watch the video replay here:

Win or lose, I think that I would stick with my double-tank strategy using the Antoid Platoon, aside from it sounds really inposing, it's a really good defense to take.

I like the Antoid Platoon as a tank for low mana battles. It is a pretty decent monster considering it costs so little. I would just have to find that perfect partner for it to be invincible.

Well, that's it for me and this concludes my Splinterlands Share Your Battle article, until we read again.

Congratulations @meitanteikudo! You have completed the following achievement on the Hive blockchain and have been rewarded with new badge(s):