The Banks & Government Can't Save Anyone But Themselves

marvinix in LeoFinance • 3 months ago

Every country out there seems to be burning in the flame of inflation, our purchasing power is reducing with every passing day and at an even faster rate than ever.

While the world looks like it's going down the drain, is it right to start questioning how we got here, who & what got us here, perhaps it's time we hold on to and trust the good agenda that Government and banks have in mind for us.

But wait, what do they have planned for us??

The reply hints that a political aspirant in the next #2023 election here in Nigeria is the solution to citizens' problems. quite ironic. 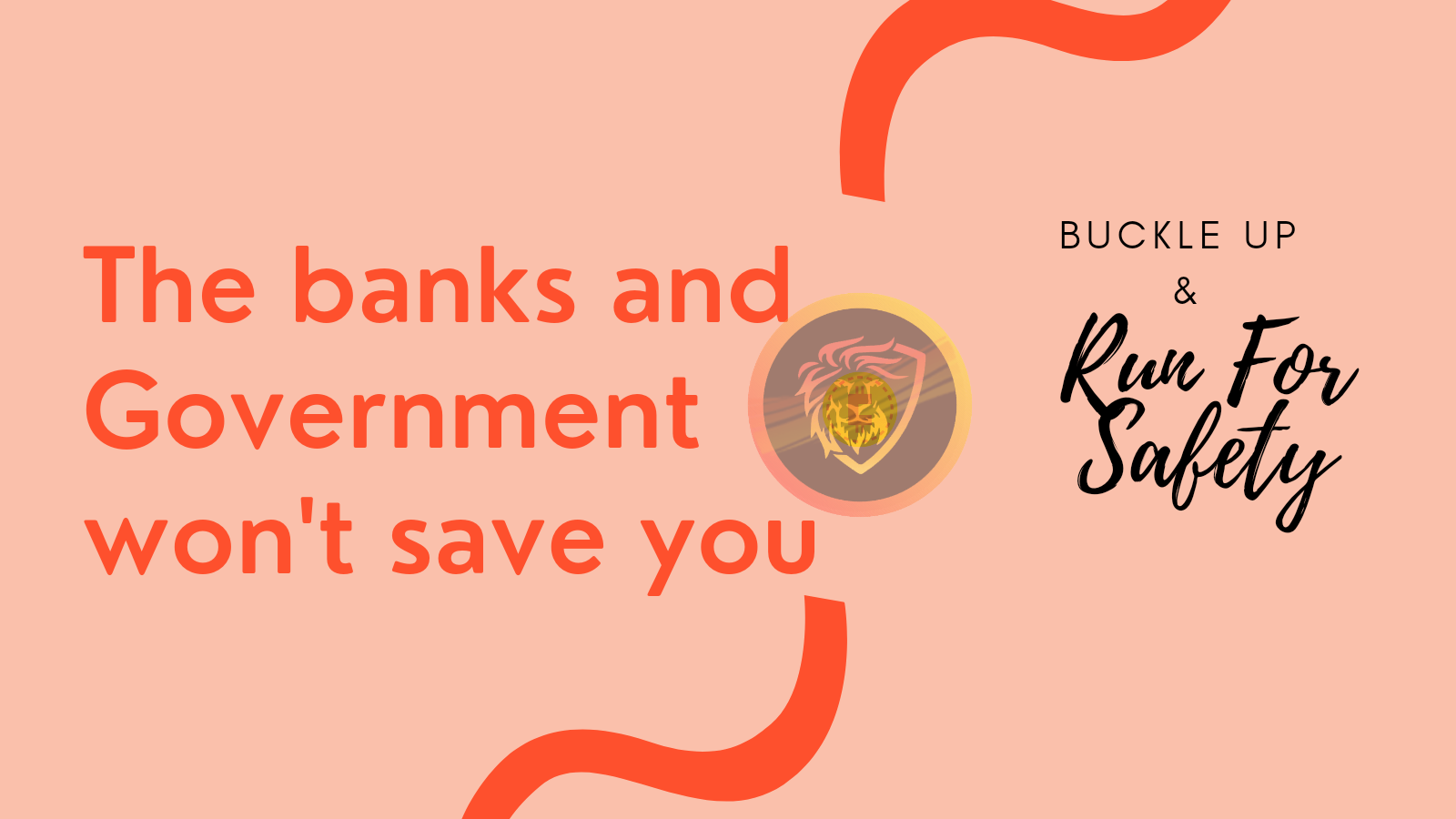 Who Can We Trust

We've trusted the government to print money, and banks to keep our money but look where it got us, what's happening currently in China can happen anywhere around the world if not yet taking place, our hard-earned money could be wiped out in a flash.

Here in Nigeria, it's like a Ponzi scheme type of banking system. They're smart enough to eat away your fund's bit by bit with no clear explanation. When you ask, there's always a maintenance narrative thrown at you.
We put so much trust in the government and banks while we seem to forget how much we should trust ourselves and question the choices we make in our lives.

Who's Making The Choice

it seems like we don't even have a choice to make in the first place, the government & banks are choosing for us.

The government tells you - "go get a certificate so I can hire you, I'll pay you monthly for your work", but I'll remove a little tax and also, pay you when you're too old to work. whoa! that seems easy huh, yes it is, and that's why we like to go the easy route because we feel safe with the government, we trust them enough to tell us how and when to live our lives.
Now we're here, the world is just starting to realize the problems which have been in existence for a long time but we're too comfortable to look somewhere else, to seek freedom.

I'll never tell you not to get an education/certificate of your choice but you should know why you're getting it and why it's beneficial to you, not because society makes it look important, know why it is.
Some are doing this for the wrong reasons only to get f*cked when there's no Job available i.e many only see it as a way to be the financially stable and free cause that's how society portrays Education.

Parents might even influence this decision but when the government fuck you over do you seek your parent's guidance/help...No, they are also being fu*ked by the current system, cause their promised retirement blah blah blah...never came in and they don't have a clue what to do. suing the government doesn't even work. The cost of filing a lawsuit can help you survive and the probability of ever winning against the government is extremely low.

Now you're thinking if suing doesn't work then protest will, you mean we all have to keep going out there and getting bashed by tear gas every day, even the risk of getting shot by a stray bullet scares the shit out of me you should be scared too, even if you're the one holding the gun. you know - live by the gun you die by it sh*t. I dont know where that came from but you got the point.

What's to come next

Banks locking people out of their accounts like it's happening right now in China I believe is now causing a whole lot of uncertainty as other bank depositors are also thinking about what may happen next if they eventually got locked out like others. This uncertainty keeps repeating itself in our brains and we'll feel helpless and hopeless if we're not strong enough to bear the unending inflation and centralization crisis hitting the world🌎 at large.

I bet many depositors will be thinking, it better I get my hard-earned cash from this one(bank) before I face the same fate. Yes, the inevitable can happen at any time so it's best to trust in your own decisions.

Who Should Be Making The Decisions

Making your own shitty decisions on your terms is better than trusting some shitty group of people who seems like enemies to each other when it's election period but share the gains after the election while you're still where you are, still sh*tting on why the government won't solve your problems. of course, they won't and the truth is they can't.

The system can only work against who it's designed to work against and that's you and me.
The average person doesn't need much, that's why he's trusting the government for less to make him whole, therefore limiting himself and only hoping an election aspirant will change his or her whole life someday. a country's president doesn't dictate how the country functions or works if we don't allow it.

Government/Banks are limited, that's if you want them to be

Yeah, they are all-powerful but there are limitations to their so-called power that they are ready to kill for and that's already happening with the help of technology, making it exciting to adopt, but just as a little sugar/salt is good for us, too much doesn't go well.

The government is now trying all its means to tackle this technology that brings about freedom, instead of focusing on what's important I.e its citizens, it's now about taking every taste of freedom away from its people, and every bit of decentralization to some degree is seen as a threat. that shows we are on the right path just not there yet, but it's best to enjoy the process and struggles involved on this journey to Decentralization.

Bans and Unban What Suit and doesn't suit U

Just 522 days ago the current, government here in Nigeria put an end to cryptocurrency transactions and that's not even the point, their ban would carry a lot of weight on limiting bank-crypto transactions not peer-to-peer. I bet they didn't see P2p coming, the fact that they can't understand this tech is not a thing, even though I had to sit with it for years to get just a glimpse.

With p2p we've been able to counter this ban, in recent events, many would have noticed that the government has this kinda subtle hate on youths and seek every opportunity to lessen their freedom under the illusion of protection. Protection against what exactly...?

It's all about restriction disguised as protection

They banned Twitter to try and achieve this after Twitter fueled a nationwide protest back in 2020, but again what a great time to adopt technology, VPNs were a lifesaver, saying - hey have your "Twitter" back.

But recently that they see how much they need the social media app(twitter) for their so-called campaign to same youths, to vote for them, of course, that's only for their benefit.

Technology & Cryptocurrency Can Save Us

Technology is going to take them off their feet with time, it's already happening, cryptocurrency has paralyzed every attack from them, and they are now limited on how much they control the average user's life and finance. Finance is something beneficial to the world economy which is why crypto is raising the new middle class into the system and the build-up of that will create and generate a whole new world economy that's of the people, by the people, and for the people.

Lives will be changed through the process and old problems would be solved. It's not going to be about why you should be educated for money or saving your money in the bank for safety, cause you can be educated to enlighten yourself and the world around you, also, you'll be the one safeguarding your own money with your private key.

Anyone who believes Government would save them is merely hallucinating.

The governments will always do what it wants and we all know it's something just to benefit themselves. The educational system is flawed and I don't think the upper education system is really worth all the money put in

we all know it's something just to benefit themselves.

People know this when there's hardship in the country but just seem to forget what happened and simp for an aspirant when its election periods, all this for little amount that may never have a real change in their lives. I've learned to not be attached to any political party out there. I think people need to start separating government from their lives.

Education is for individual and with technology you can hedge the thousand of dollars and time spent in Unis, with virtual learning and online courses. In a place like Nigeria getting an upper education is never enough, you need to be updated as the system is outdated and doesn't solve real world problems anymore.

Submit
0.00 STEM
Reply
[-]
poshtoken  3 months ago
The rewards earned on this comment will go directly to the people sharing the post on Twitter as long as they are registered with @poshtoken. Sign up at https://hiveposh.com.
100%
-100%