What is an NFT?

lbi-token in LeoFinance • 8 months ago (edited)

So, what the heck is an NFT? 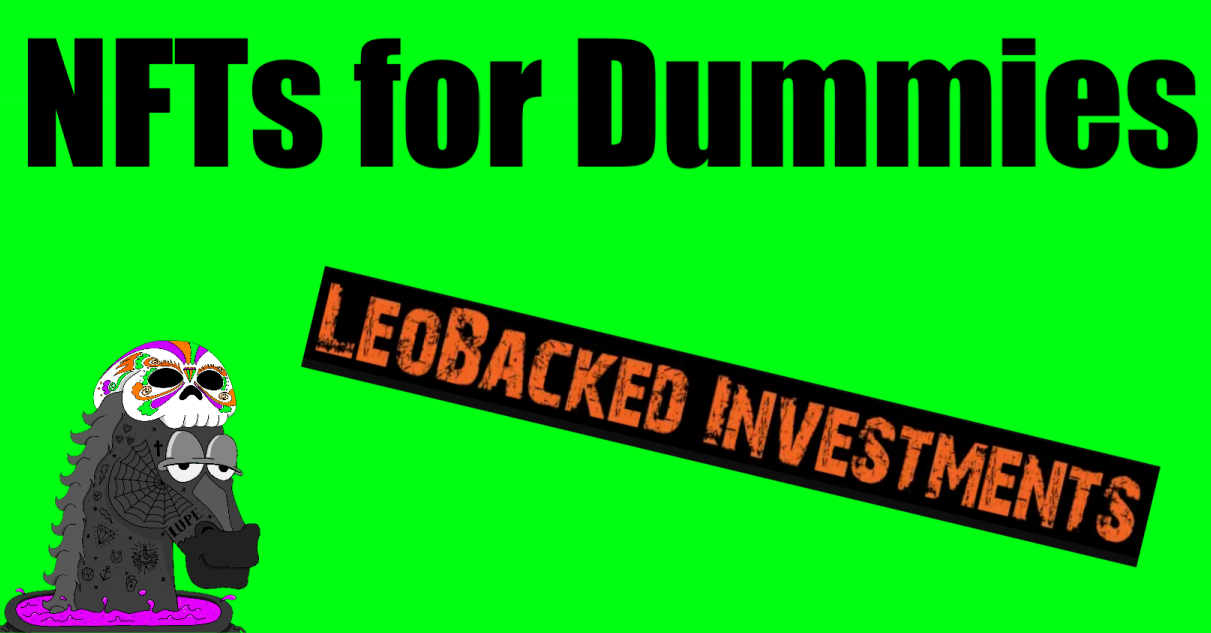 What does NFT mean?

There's a lot of noise out there in the massive cryptocurrency space. A lot of that noise is centered around "metaverse" and NFTs. Despite seeing numerous posts and articles trying to explain NFTs, I felt like I should give everyone a refresher. From the perspective of someone who creates, collects, and trades them.

So starting from the very basic question - What does NFT stand for? NFT stands for Non-Fungible Token. Ok, so what is a Non-Fungible Token? A non-fungible token is a digital asset similar to any cryptocurrency but one major difference is that 1 NFT is not the same as any other NFT.

For example: Bill has 1 USD and trades that 1 USD for another 1 USD bill. Bill still has the same 1 USD because dollar bills are fungible. This means that 1 USD bill and another 1 USD bill are the same. On the other side of that - Bill has 1 NFT from collection X and trades it for another similar NFT from collection X. Bill now has a totally new asset, even though the NFTs may look similar on the surface.

This is because NFTs are not interchangeable like the USD bill is. 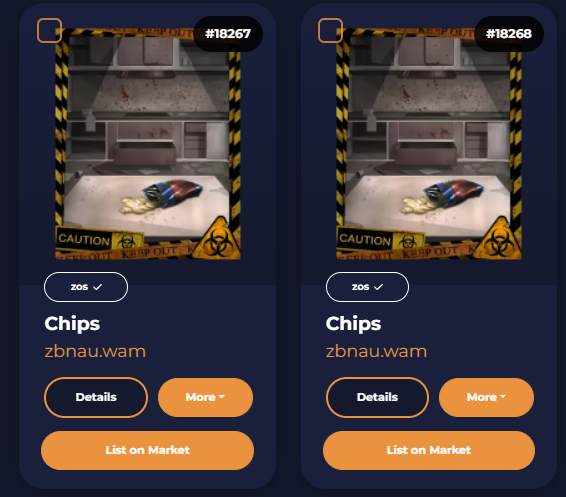 What makes an NFT unique?

Now that we understand that these digital assets are not interchangeable, let's look at exactly why. Take a look at the 2 NFTs above side by side. These are 2 identical NFTs from a game that I have been playing with called Zombie Outbreak Survival that uses NFTs for items. These both may be Chips, but because they are digital assets on the blockchain, they will have different data stored inside them. Look at the top right corner of each and you will see that one is #18267 and one is #18268. They are not the same. Get it?

Despite being similar and serving the same purpose inside the game, these 2 NFTs are different when it comes to the data stored on the blockchain. In the game itself, that doesn't matter at all because they literally do the same. I was just trying to drive the non-interchangeable point home.

I hope I did that in a way that was easy to understand. This is a for dummies post, after all. I'd like to add, also, that I'm no expert. I've just been around for a while.

NFTs come in a lot of different flavors.

Not only can NFTs live on different blockchains like Hive, Ethereum, BNB Chain, Polygon, WAX, and many more... But they also come in a lot of different flavors and can serve a lot of different purposes. A lot of people have this common misconception that NFTs are just digital art or collectibles. This is not at all the case.

The NFT technology is pretty incredible and can serve a lot of different purposes but because humans are generally awful... The concept devolved into ugly monkey profile pictures and who could sell a drawing for more money. I have nothing against digital art being sold as NFTs, but I do have a problem with how it has become the default use-case (or lack there of) for the technology.

I already gave you an example of one of the many ways that this technology can be used above - gaming. If you can't tell by now, I'm a hardcore nerd. I love video games, especially when I can earn something from playing them. Take Splinterlands or Gods Unchained for example. These are 2 games that you can play right now for free and earn NFTs and cryptocurrency.

All of the assets that exist within these 2 games are NFTs that live on different blockchains. This gives the players true ownership of the assets. There's no creating fake assets or cheating because it's all verifiable on the blockchain.

What about other flavors?

Gaming is just one of the many ways that NFTs can be used to give the user true ownership. Another great example is using them for music. Instead of releasing a song on a major streaming platform only to get your income eaten up by distributors and such... You could mint the song as an NFT and sell your own copies of the song directly to the consumer. This cuts out the middleman that takes a cut and allows the artist to connect with the fans.

These could simply be animations with the MP3 file attached, or even music videos. Some differences could be - instead of just being able to listen to the song, the holder of the NFT could get a discount on merch for example. That NFT is a receipt of digital ownership which can be verified in the holder's wallet. This could also serve for the purpose of airdrops.

Maybe the artist wants to reward fans who purchased the NFT of their song, they could instantly send another asset to their wallet. Instead of doing sketchy non-transparent giveaways on Twitter, the artist could interact with those that purchased directly, and in a transparent way. Maybe even airdropping tickets to a concert to holders.

Starting to see some utility other than stupid drawings?

This post is getting a little lengthy and I have so much more to say. Maybe I'll do a series of posts for this. Shoutout to whoever it was that suggested doing NFT content to start with (drop a comment, I can't remember lol).

Thanks for stopping by. Let's continue the discussion in the comments and get engaged.

P.S. Thanks @forexbrokr for the SEO suggestions :)

You're going to do just fine here.

But how could you not mention the word JPG in the whole guide? ;)

The first sentence is important for SEO (and if an image is first, the alt tag which is the text inside [] is important.

Thanks man! I'm learning all kinds of SEO shit from you.

That was a great overview. I think the main reason they talk about all the art over on ETH is just because of the huge amounts of money that are changing hands over there. It's sensational, so that sells. We have already seen things cool down quite a bit but we are just starting to scratch the surface of NFTs.

I love these beginner guides you are doing!

Good to know they're appreciated. I try to look through the lens of someone that had never heard of this shit and it's their first time reading about it.

NFTitties are the best NFTs, I'm a simpleton I know :P

I mean, I can't really disagree lol. In it for the art, or whatever the kids say these days

It will be interesting to see more people use it for more than just art. I also want to note that the gaming community I see outside of crypto seems to be very against NFTs because they don't trust the publishers and believe it is nothing more than another cash grab. You can't blame them after all the micro-transactions and loot boxes.

Oh yeah, I mean just look at what happened with the Ubisoft Ghost Recon NFTs. The way it was done is horrific and it really left a bad taste in players mouths.

There's definitely a place for nfts in gaming, but not like that.

I do like the idea of NFTs as a way to "anchor" what we might call "digital scarcity." From where I am sitting, that makes the most sense in the case of "collectibles," like digital baseball cards or gaming cards like Splinterlands.

I remain a bit skeptical about the people who are basically creating "art mills" and churning out lots of these and marketing them for $1,000's on the pretext that they are "rare." Who actually cares, aside from those wanting to make a greed-driving cash grab?

On a broader scale, thanks for creating this explanatory series of articles!

The idea of scarce digital assets sounds kind of silly but it's something that's already done every day just without the NFT tech. For example, limited edition skins in say Fortnite.

I love digital art honestly, but the JPG craze is annoying as hell.

Awesome beginner's guide! I love how you've optimized it. I've had bunch of ideas in the past "for dummies"-content, as it is outward facing content in its finest. Great work!

Thank you! I was hoping it would be well-received.

Judging by the results you have in terms of organic traffic, you're doing an awesome job with your content.

Thanks a lot! Glad to see the time and effort paying off.

Great guide, thanks for posting!

Ethereum is the premier blockchain for NFTs but the NFTs on there are quite expensive. Luckily there is Polygon and Solana for people who can't spend afford to some hundreds to thousands of dollars.

Ethereum is only the "premier" blockchain for NFTs because it was the first. There are so many better options. Even Hive is better.

Nft is only just starting. Now some of the nft reward you with discounts. And if you buy so much from them, can give you another free nft. The nft that has art on it, are so beautiful !

I believe more is still coming from NFT because now we are in the early stages. Nft still changing lives