The Next Big Player in Move2Earn is Here - SweatCoin

frens, if you haven't heard of move2earn yet, it's the latest hype train in crypto. 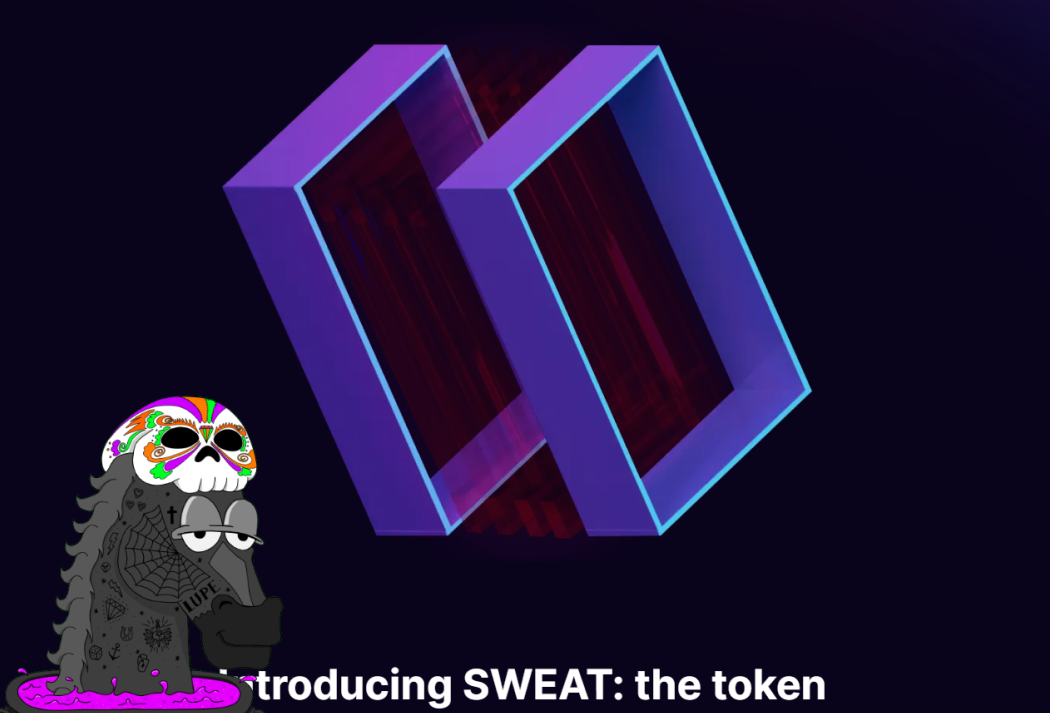 Move to earn apps are a new thing that has recently gotten a lot of hype. These apps allow you to be rewarded in crypto for your step count. Basically the idea is to reward you for being active, sort of like ActiFit does. I've personally been using SweatCoin for years and earning worthless SWC tokens that could only be spent in their marketplace for really... Not much. I recently read about a project called StepN that allows users to purchase NFT shoes that allow them to earn from steps.

I've heard of a couple other apps like this and they seem to be getting a ton of hype. SweatCoin has been doing this for years. I've literally had it running in the background on my phone for years and been stacking up tokens that are now going to get me an airdrop! SweatCoin is making the move to crypto with the new token that is going to be issued on the NEAR blockchain, SWEAT. This came as a pleasant surprise to me as I've always liked the idea of being rewarded for being active. 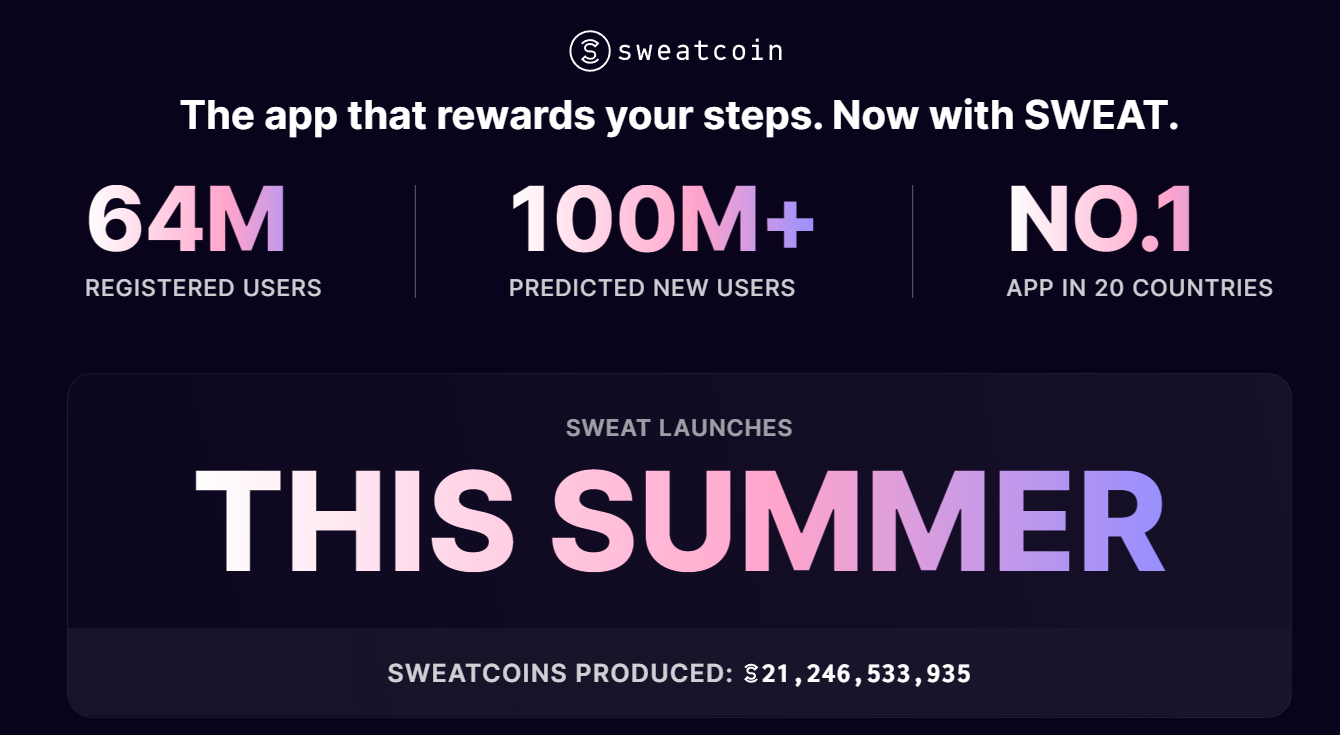 The major difference here is that SweatCoin has been in the game 10x as long as any of these other apps coming out. It has a whopping 64 million users and is the number 1 app in 20 fucking countries! This means that 64 million people are going to be exposed to cryptocurrency whether they have ever used it or not. This is going to make the number 1 app in 20 countries a crypto native earning app. How cool is that?!

Another major difference with SweatCoin is allowing anyone to participate. No investment, no buying an over priced NFT, no bullshit. Just register and start walking. The people that have been using the app thus far are going to be getting a nice airdrop too! This will be a 1 to 1 airdrop where for every SWC token in your wallet, you will receive 1 SWEAT on the NEAR blockchain. The SWEAT token will serve 2 purposes and is only minted by users taking steps. It will serve as a governance token and as a staking token. By staking SWEAT, users will be able to earn a percentage of all SWEAT minted every single day. As it exists now, users can only earn sweat by walking and steps are validated before being converted into tokens.

After the SWEAT launch, they plan to decentralize the step verification process to enable wearables and other apps. This will allow users to earn from all kinds of trackable physical activities such as cycling, hiking, and even working out at the gym. With this large of a user base, I have a feeling this is going to be a huge success.

Not only can the SWEAT tokens be spent on goods in the marketplace, but now they will be free to trade. Now there will be an open market for the token, whether it be on decentralized exchanges or whatever kind of exchange. This give these tokens real world value. The market will decide what the tokens are worth.

Personally I have never used NEAR, but I assume it works similarly to Polygon. Super fast, low fees, and eco-friendly. I can't wait to claim my airdrop. I'll have a nice little stack to stake and earn.

Have you ever used SweatCoin?

If not, you can use my link to sign up and start earning crypto for walking.

i used it a few times but didn't like it. I always preferred actifit. But I'll give it another shot. I'll run them both. Hope you do the same. Actifit is my favorite hive app by far. I hope more people use it.

Yeah, I've been using actifit for a long time as well.

Sweatcoin was shit back in the day x)

Oh yeah. I was using it right when it launched. Lol

Ah, you lost me at airdrop. Not much point in trying to jump on the wagon now. Thanks for the review though, I know they were talking about move 2 earn in the Leo Discord the other day. I think Actifit and Leo might be teaming up on a pool or something.

Still doesn't hurt to have the app passively on your device earning you some crypto. Just like actifit except you don't have to do a post. I think Actifit and Leo teaming up is gunna be really cool.

Yeah, I did the Actifit thing for a while. I finally gave up on it because all the tokens I had were worth like $5. It was sad.

I just put whatever I had after the airdrop straight into the DeFi platform and forgot all about it. Maybe one day it'll be worth something.

I just checked and I am still sitting on my tokens. Right around 17k of them. I didn't know they had a DeFi piece.

I'll have to check that out. Thanks!

What do these apps gain from tracking your movements? I'm struggling to understand the economic model this whole time...

If I had to guess - location data and health data. Both of which can be sold for targeted ads. That's really the only thing I can think of.

Yeah, that would make sense. They just seem to be giving a lot of money through these tokens so it sparked my curiosity.

I think it's a net positive for them overall. They probably take a tiny percentage of all tokens minted. I dunno though, I just know that have a metric shit ton of active users and they're all about to get a dose of crypto.

If the 600 + brand partners are either directly or indirectly involved in the movement economy, they might accept the token to purchase their goods and that would be a great utility for SWC.

Exactly. This is just a step in the right direction. Once the SWEAT tokens come out and start trading on the market, the market will decide the value of them.

Have you ever used SweatCoin?

I have not even heard about SweatCoin so far, but because now it is available to trade, I am willing to bet that many people are going to start "breaking a sweat". Maybe myself included. I used only Actifit so far.

Why not use both? Thanks for stopping by!

Congratulations.. Ghats a pleasant surprise indeed.. I should check out this app that I've been hearing about for days now

Thanks buddy! A surprise airdrop is always nice.

Somebody shared to me the link, but I had no intention to install it on my mobile phone. Reading your post, I changed my mind. Installing it now.

The idea of the sweatcoin is kinda a way to encourage people do more exercise thereby earning, and I must say this is brilliant, I also love to be rewarded for being active, and from the look of things, this will thrive a long way.

Yeah, I think it's really cool to bring crypto to this amount of users too. Already proven that the app is successful.

I have not heard from this, but thanks to your article I was able to become aware of these events).