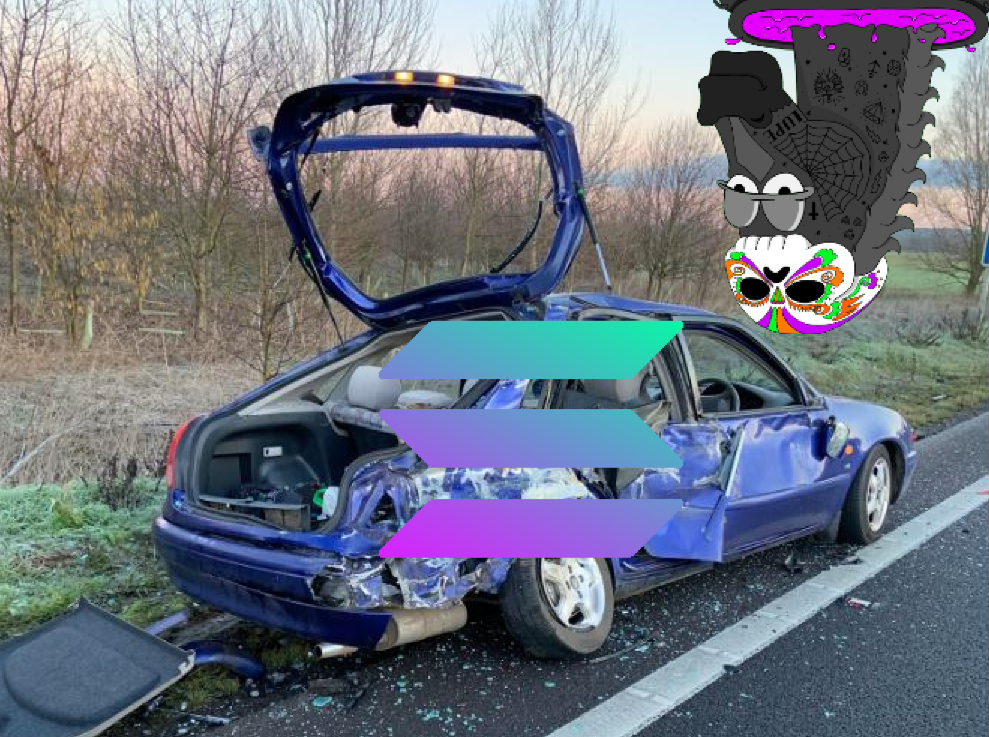 Look, I'll go ahead and say this - I have never been a fan of Solana. I've never touched it and never plan to for many reasons. I remember the first time I heard about it, it was shilled to me as the "Ethereum Killer". Let's unpack what that means, because you can't just say you're gunna kill the OG smart contract blockchain and not back it up with something. Solana is advertised to have 400 millisecond block times and transactions less than 1 cent. It's supposedly decentralized and capable of 710,000 transactions per second, according to the official documentation.

To be fair, I think at least one of those statements is actually true, and that's cheap transactions. Everything else is highly debatable. So take those few details and compare it to Ethereum, you can see on paper which one is superior. But paper isn't what matters here. What really matters is that while Solana may be faster and cheaper - Ethereum actually fucking works. It's also highly decentralized and headed for a much brighter future with the next upgrade.

We're not here to talk about Ethereum though. Solana just went down for the 7th time this year. Yes, this year. Like the past 4 months. 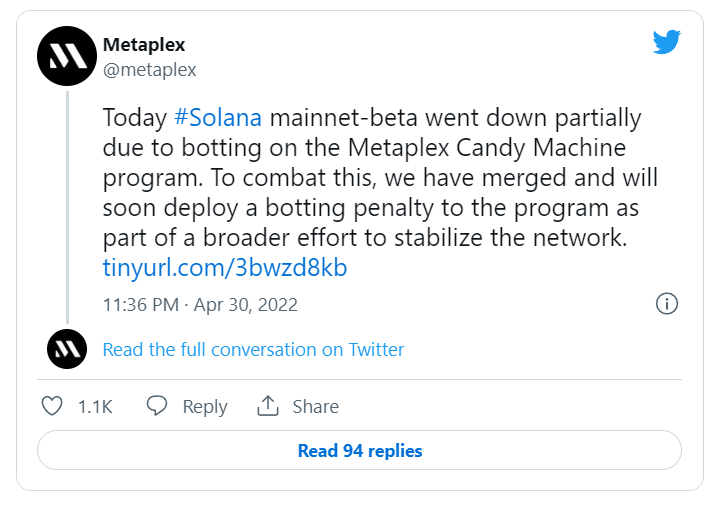 Historically, since launch Solana has suffered a total of 11 complete network outages rendering the blockchain completely useless. This is not something anyone using cryptocurrency wants to have to deal with. Imagine if you're trying to make a sell or buy because you see a pump or dump coming... And you can't because the blockchain is halted. That's a horrible user experience.

Red flags flying high anyone? I've been skeptical of Solana as a whole since the beginning as I said. The founders hold a ton of tokens, the validators are highly centralized, and I just can't fathom such a system failing so hard so many times. We're not just talking about a major decentralized application launching and congesting the network 11 times. We're talking about just full on network outages for the most part cause by bad blockchain design. As I said, Solana does look superior on paper, but at what cost? I could go on and on about the reasons I'd much rather trust the Ethereum blockchain over Solana, but I won't bore you with that. I'd much rather let people know about the issues with Solana and let you make your own decisions about which one is better. Would you rather pay higher fees or risk the whole chain being halted because someone mints a stupid NFT?

Also - there's a ton of other blockchains that are theoretically superior to Ethereum, technically speaking. Take Hive, for example. Free transactions and 3 second block times. Take WAX for example. Free transactions, one second block times. If you're really just looking at pure specs, there's many superior chains. What you can't see on paper is the network effect. This is the sheer number of users, the number of dapps, the amount of capital locked in the network, and even the community around it.

All I hear about in regard to Solana is NFT projects that are literally just profile picture JPEGs. I've never heard of a crazy DeFi app or any cool games being built on Solana. Maybe I've just had my blinders on, but I don't see major development happening over there. Just pay attention to what's going on around you. Solana is like that old car you pass on the side of the road going down the highway and wonder "what happened there"? lol

Remember kids - it's the wild west in crypto land. I'm not saying don't use Solana or that it's going to fail tomorrow. All I'm saying is... Watch your back and stay stay free.

It's strange that I've never used a dapp on Solana.. maybe it's cos I've always pictured it as just NFT chain. The name comes up when it's down or someone on youtube telling you how to make 100$ to 1000$ by flipping NFTs. Feels kinda shady.

That was one of my points. You don't really hear about any dapps, just NFT pump and dumps.

I'm not a fan of Solana or Ethereum. Is it really so much better than Solana when ETH technically works, if you're willing to spend $3000 to maybe get a transaction through when it gets busy?

But SOL is a SOL killer if anything !LOLZ

Arguably, yes Ethereum is better. But yeah, Solana is killing itself. lol

I think they are both killing themselves

Went to buy something with Eth the other day and the Fee was $3000. Might as well have been down.

Eh, at least we know Ethereum is doing something about it. The merge should help with fees and congestion.

Yeah but I remember buying cryptokitties in 2017 and they swore then the fix was just around the corner.

We'll see I guess but the track record for doing what they say isn't stellar.

I never got involved in solana as I only remember seeing bad news on their end. I'm sure that's not all there is about them but it's what got to me

What I can actually say is that many people were attracted to it as a result of the cheap transaction fee, that's all there is to Solana. But then I don't trust anything that's a KILLER of another thing. It's always a cheap immtation that sells promise and hype.

Exactly. It's sad how quick people are to jump on shiny new thing because it has cheaper transactions.

That's true... sooo many ethereum killers out there

Submit
0.00 STEM
Reply
[-]
poshtoken  2 months ago (edited)
The rewards earned on this comment will go directly to the person sharing the post on Twitter as long as they are registered with @poshtoken. Sign up at https://hiveposh.com.
100%
-100%

I really like Solana by design, but they really need to get a handle on these problems.

Horrendous design and even worse devs.

Lol. Funny to see how some of these other networks use the words like Ethereum Killer etc just to get some attention.

They were all quick to jump on the Ethereum killer bandwagon lol.

All this small small coin,I don't buy it because when ever crypto enter in heavy bear market, they always vanish or they sell More.

That chain is so SUS

When I first heard about it, that is the face I made. lol

Who uses it anyway!? 😅
Just kidding, I know a lot of people do. It is the centralized VC Chain!

I think the phenomenon of cheap blockchain networks is to pump the price of the token without having a real value, it happens with solana, since 11 bugs is a lot to generate distrust.

That's true... I hope the other so-called Ethereum killers don't follow the same path because I actually like Fantom, for example

Yeah, doesn't inspire a lot of confidence in the chain.

Thanks for the heads up!

Just doing my part! Thanks for stopping by 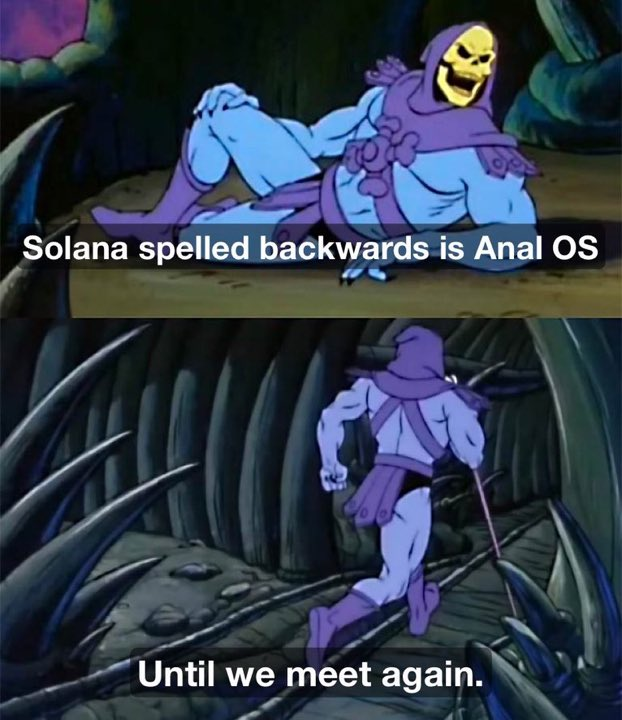 hahahhaa!!! This made my day

I usually just mentally log out whenever I read "Ethereum killer" lol.

Me too bro. It's silly to think about.

I don’t like anything relate to solana, the name is one of those reason why I do like it. The hype for was much and last when it around 250$ my friend keep making jest of me that I miss that it would reach 2k. Maybe it will surprise them not me.

Me neither buddy. I'm not using anything financial that randomly just goes offline with no explanation

I guess I would say bad news is Solana's lover 🙃

You could say that for sure.

I am glad you agree.

I just imagined a car who just stalled on a highway and the engine won't start, lol! Thank you for the reminder. I honestly didn't check Solana even when it was creating a buzz. I think I even had a wee bit airdrop of it on one wallet I've used before.

Haha that's all I can picture with solana. Never was interested.

That's how you painted it, lol! But maybe if we took a look back then, we could have made something out of its popularity hehe

Yeah he can keep his SOL lol. I hope it doesn't go down farther for his sake.