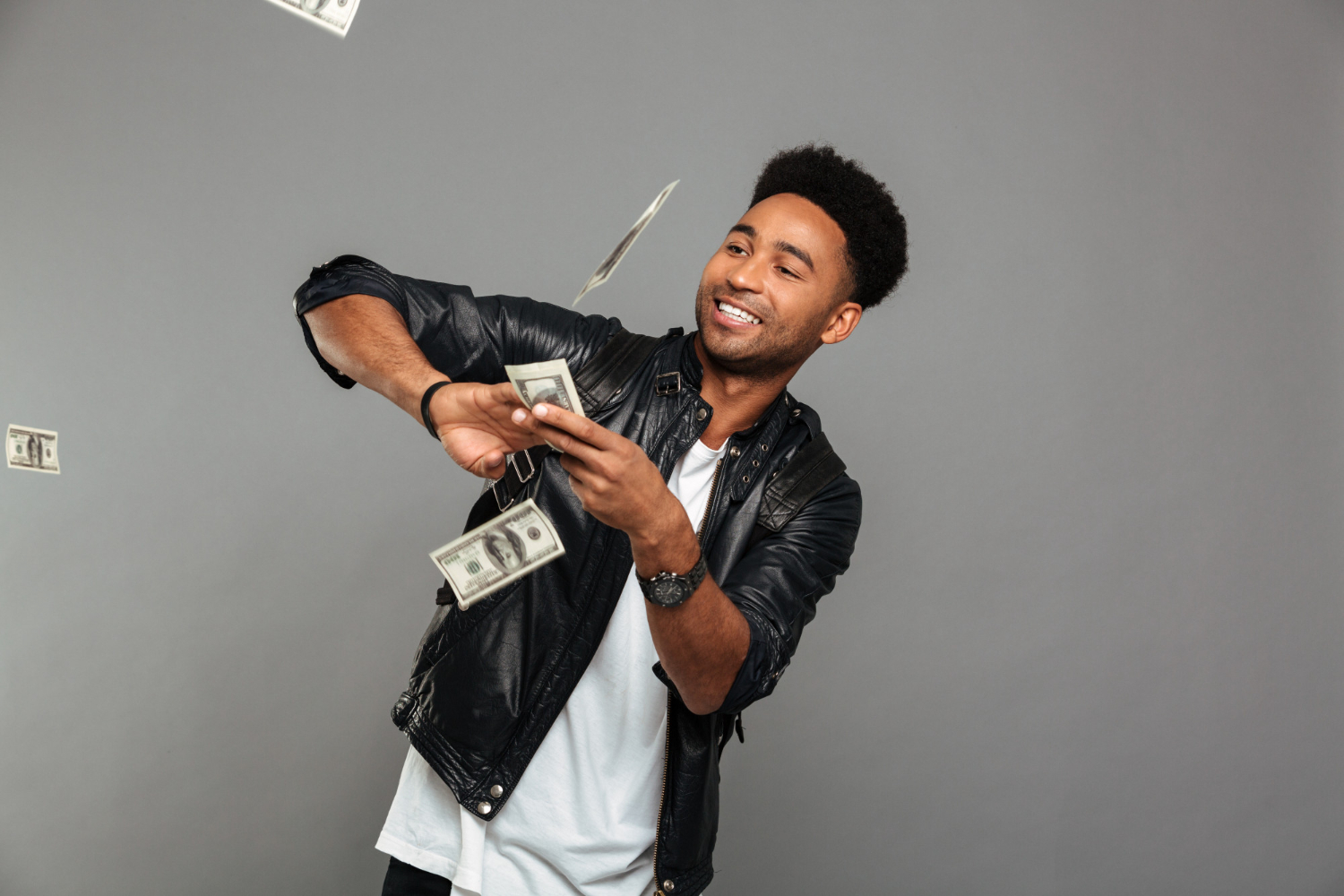 A couple of us have had a moment at one point or the other when we thought we have made an unexpected amount of bucks from cryptocurrency but it turned out to be a miscalculation or a misunderstanding that can be very depressing, well, here is my story.

Yesterday I opened my trust wallet app which has been left dormant for over a month, My mission was to copy my BCH wallet address which I was about to use to log in to a crypto site, then I noticed a token I was accumulating last year has suddenly spiked in price!

The token's name is cyberfm radio (cyfm) and it's a token that is awarded to users that listen to their radio stations. I was introduced to it last year by a friend and I used it for over a month. Basically, you get rewarded a number of cyfm tokens which depends on the amount of time you spent listening to the radio. I accumulated about 188k cyfm which I thought was gonna be sent to my trust wallet after a month, but that didn't happen. The 188k cyfm was only present in the app's wallet and I was told I have to "claim it" before it can be sent to my trust wallet. I checked out how to claim it and since the token is based on the Ethereum chain (erc-20), the gas fee was ridiculously high! I'm talking about paying about a $150 gas fee for just $5 worth of cyfm, so I abandoned it and uninstalled the app.

Then you can imagine my surprise when I saw the token has spiked to about $0.01. I pulled out my calculator and saw that my 188k cyfm was now worth approximately $1800! (Woooohooo!) I quickly went and reinstalled the app, logged in with my ETH address, and saw the 188k cyfm just chilling and waiting to be claimed. 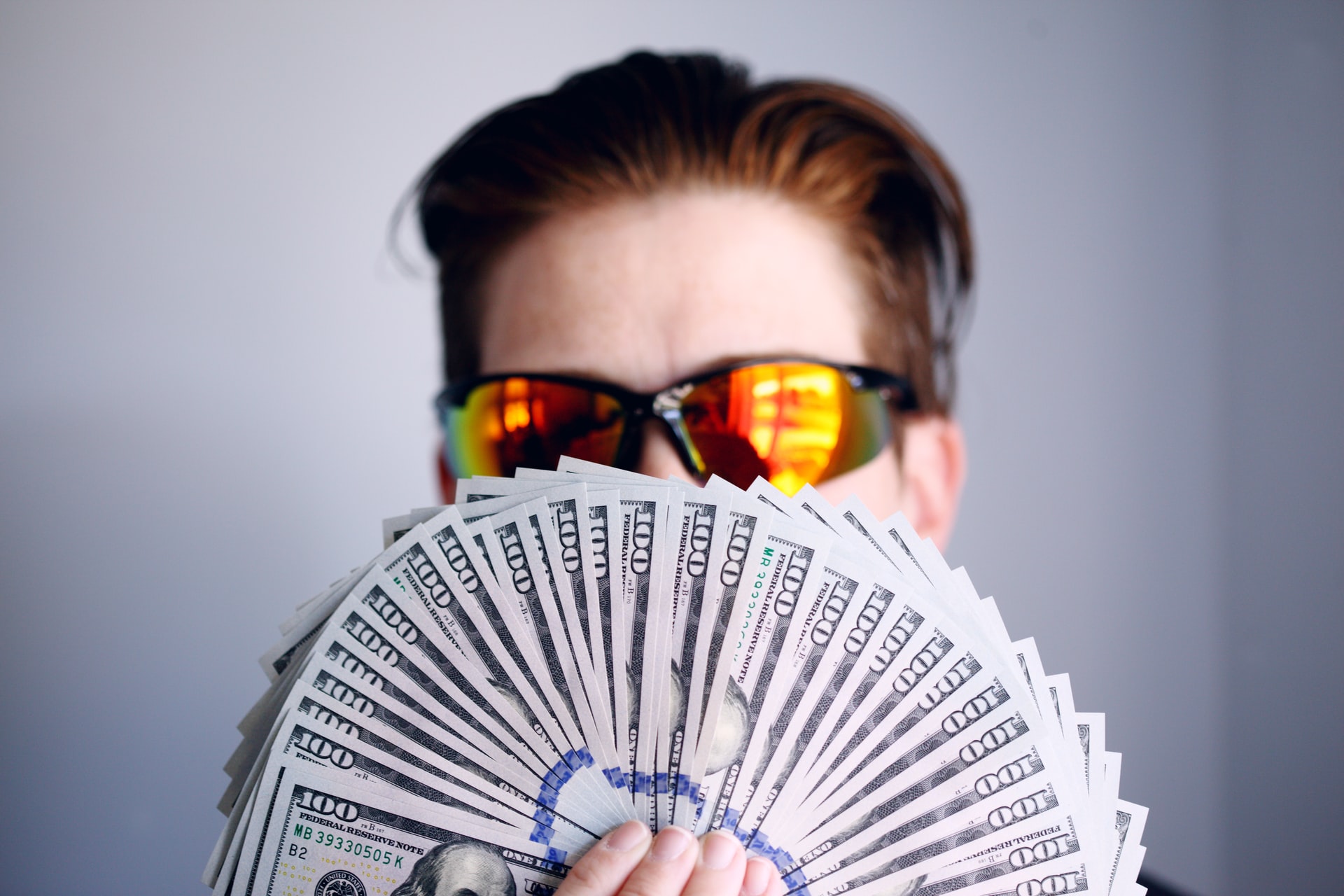 I went back to trust wallet to check out the token's chart and to see when the price started going high. I noticed it spiked just last month and it got to an all-time high of $0.12, which means mine was worth over $22,500 at that point! There is a possibility the price will rise to that point again (or even higher) so I ran back to Cyberfm app. While going through the app, I noticed a few changes have been made since last year I used it. The cyfm token now has 2 more chains; TRC-20 and BEP-20 (Tron and Binance), which means users can now choose to get tokens under ETH, TRX, or BSC. This latest development now makes it easier without having to deal with ETH's high gas fee, but I wasn't worried about that at the moment, I just wanted to claim my 188k cyfm and have it swapped with maybe USDT or BUSD or even BTC.

And so the claiming War began

I tried claiming the 188k cyfm and I was redirected to their website which has instructions on how to claim. At first, I was confused after reading the instructions, but after watching the video instruction as well, I understood what to do (well, to an extent). I followed the instructions closely and the first step was to connect the app's wallet to my trust wallet (using wallet connect). I tried doing that but it didn't work.

I made several attempts to connect it but it still wasn't working. I was told for it to work, the wallet address from the cyberfm app has to match the trust wallet address, mine matched but was not working for some unknown reasons.

I figured maybe I needed to update my trust wallet app so I did that. After updating it, I tried again to connect it but nothing happened, it even became worse than before as I always got an error message. I was stuck, but I got an idea; open the website in trust wallet's dapp browser and connect it from there. I tried that and it progressed further than it did before, it looked like it was gonna work but it just kept on loading, and loading, and loading 😥

I tried again so many times but it never got past the loading screen. At this point, I was already getting frustrated and thought about quitting but I remembered what was at stake here; $1800. So I entered my problem-solving mode and brainstormed what was wrong. I figured the problem might actually be that particular wallet, so I created a new multi-wallet.

After creating the new wallet, I opened the same link in the dapp browser and tried connecting both wallets and it worked! But since both wallet's addresses have to match, this new trust wallet had zero cyfm in it but I just needed to see it worked. This new wallet connected but why did the previous one refuse to connect?🤔

I opened up the website and tried connecting both wallets again, at first it looked like it won't connect after loading for a long time but it finally connected! I could see the 188k cyfm right there and I'm getting closer to the $1800. 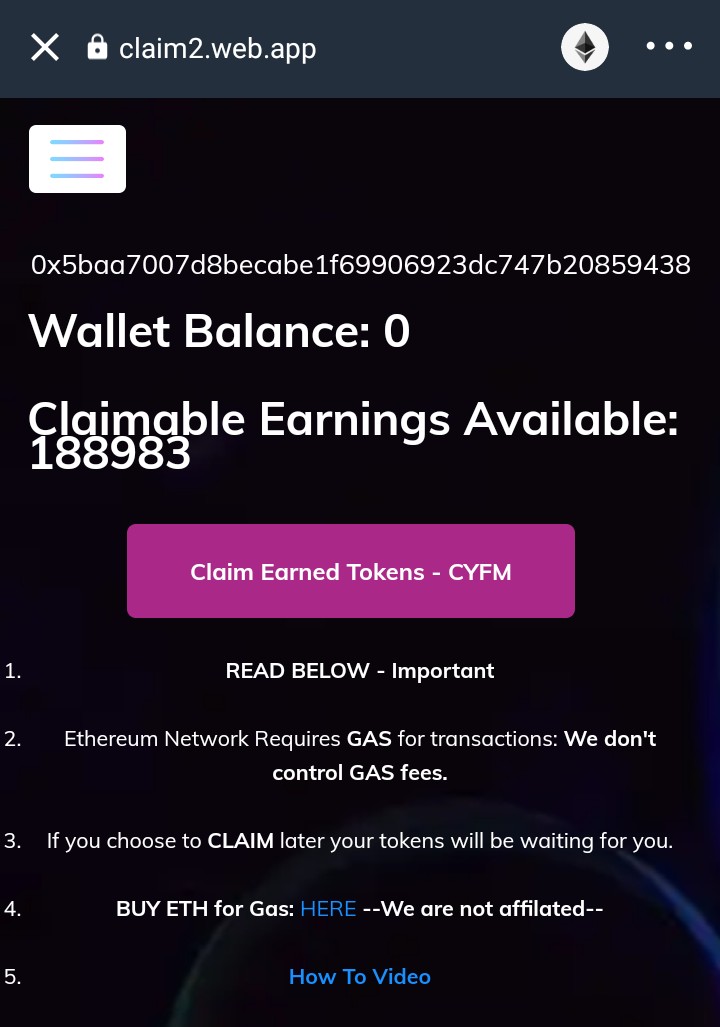 As soon as the wallet connected, the claim button became active so I clicked on it. I was presented with a screen that shows the amount of gas fee I was to pay which was about $56, which was very cheap compared to the $1800 I was about to get. But before proceeding, I first had to check if I can actually swap or trade the token to something useful, and also I had to know the exchanges I can trade it. I like laying out plans and putting things in place before carrying out any action to reduce the possibility of encountering an unfavorable or unexpected situation. So I called up a couple of friends and gave them the intel, I asked them to help in looking for markets where I can trade cyfm. After a couple of minutes, they returned with screenshots of likely markets but we were all confused by the differences in price across exchanges. 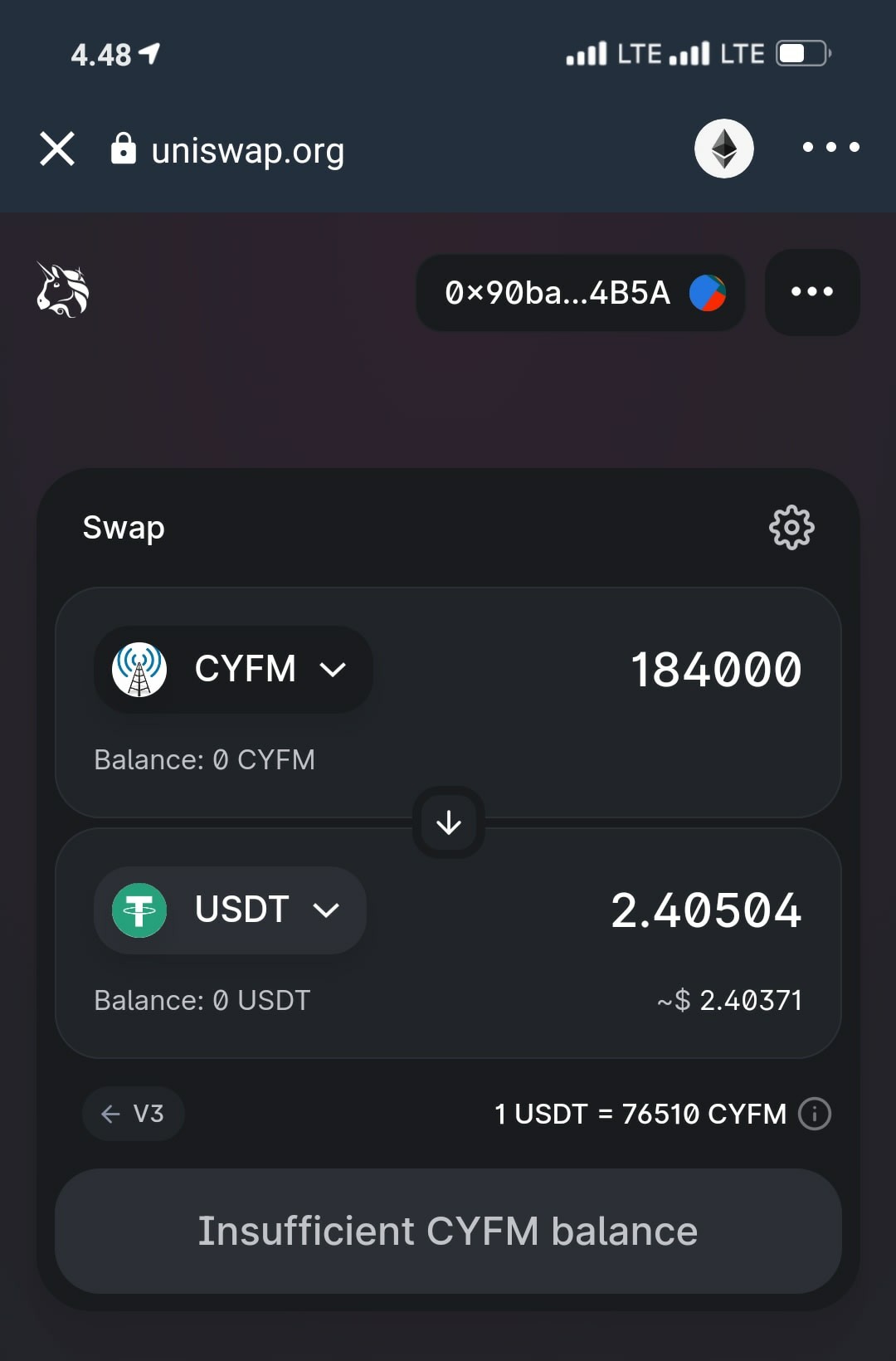 A fork down the road

The above screenshot is from uniswap, you can see that 184k cyfm amounted to just $2.4. pancakeswap, justswap, and latoken were all showing huge price differences and we were all wondering what the hell is going on, and then someone else sent this: I figured those prices represented the price for each of the tokens under the 3 different chains (ERC, TRC, and BEP), but why did trust wallet display the same price of 0.01 for the 3 chains? (That's a truly cruel thing for a wallet that has trust as its name to do). With that question in mind, I went to the cyberfm telegram group searching for answers. The admin of the group sent this: 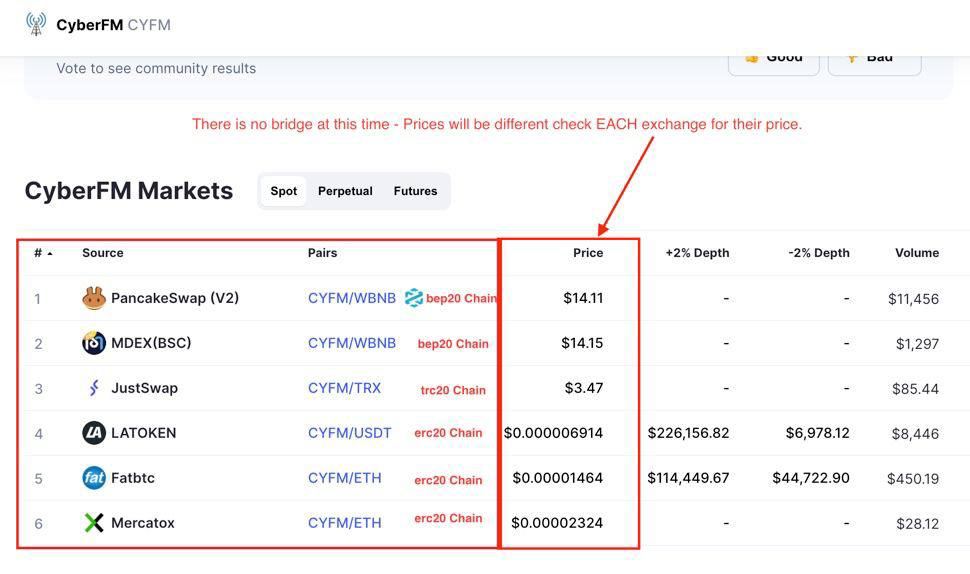 She explained that cyfm is a multi-chain token and the price that's displayed in Trust wallet is the average price of all 3 tokens (ouch! 💔), I should check coingecko to see the price of individual tokens (duh, I'm looking at the prices right now). After that helpful but painful explanation, I quietly left the group and went to console myself after almost clenching a phantom $1800. But I figured things could have been worse; I could have excitedly purchased $56 worth of ETH to pay for the gas fee and end up with $2.5 worth of cyfm tokens, I'm pretty sure someone out there will make or has even made that exact mistake 😂

This was fun reading, I'm happy for you that you didn't lose money in the process.

I remember when I once opened my julswap app and saw a bunch of stacked up BNB worth thousands of dollars. I was excited, I immediately wanted to withdraw them, then realized I was on some shit test net, imagine trying to reap where you didn't sow😅

Lmao, I have been in that scenario before, getting excited for a couple of coins in your wallet just for you to have your hopes shattered after discovering it is all a sham😅 crypto can be mean sometimes