Here is a good source of information regarding bitcoin price. It’s called the Stock to Flow ratio and is to be found on a great website called glassnode.com. The graph is from bitcoin expert, PlanB. On Glassnode there are numerous charts with details on bitcoin that we don’t see on the price charts alone. I recommend having a look at it as part of your research. 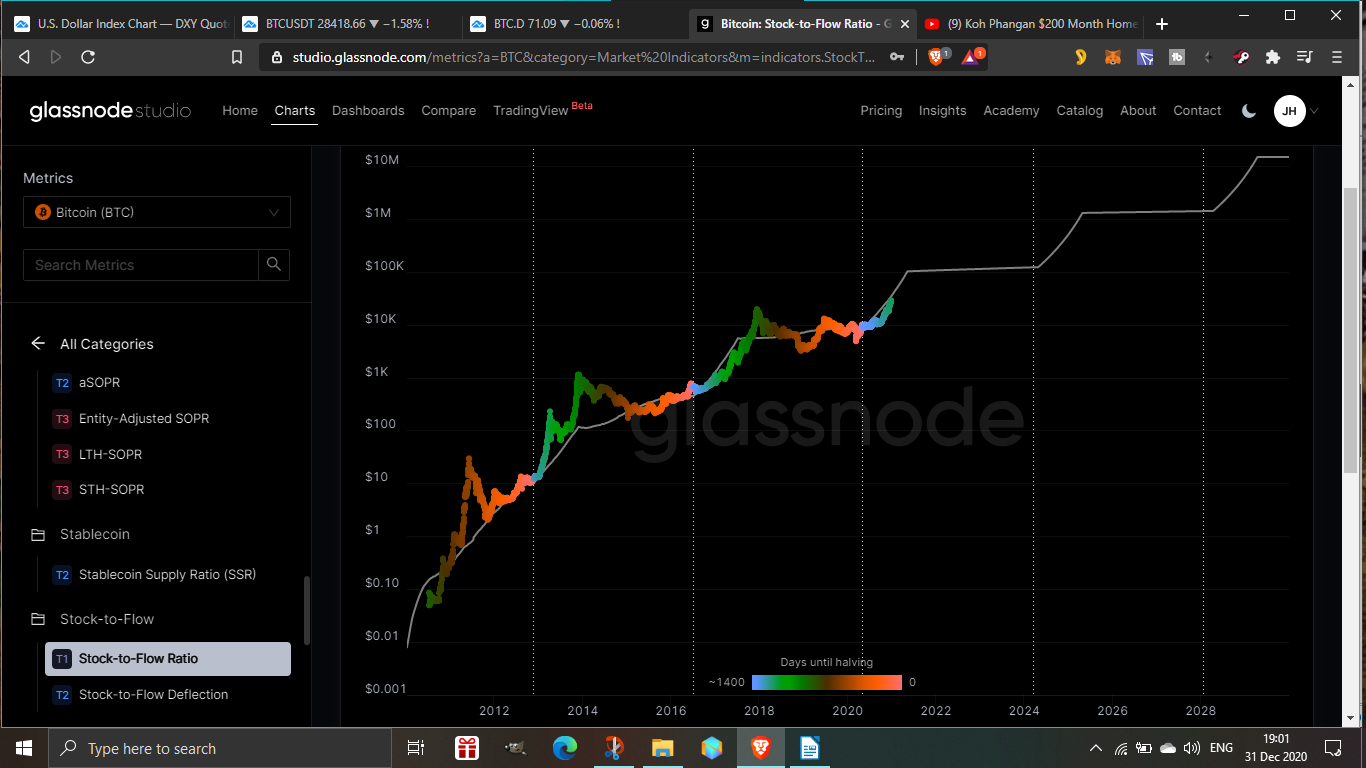 As you can see in the chart, price is nicely following the predicted trajectory, from one halving to the next. Our last halving in May 2020 has triggered the current bull run. With each halving, written into the bitcoin code by Satoshi, the pseudonymous inventor or bitcoin, the output of bitcoin by miners is halved. The halving of the supply of fresh bitcoin means that – if demand stays the same – there will be less available and price will rise accordingly. It’s simple supply and demand.

In other words bitcoin is deflationary while fiat is inflationary, where the government can print as much as they like of it. This devalues the supply of fiat already present. Opposite to this is bitcoin, where the code is designed to only allow a fixed cap of 21 million bitcoin. This means it will basically increase in value until it becomes more valuable than gold. After all, gold can be mined newly all the time.

Is this chart we can see the predicted trajectory of bitcoin’s price and it looks optimistic. We are currently on our way to a price of $100 000 for a bitcoin. That may sound huge, but if you zoom out to a longer term trajectory, you can see on this chart how price is actually on the way to $1 million. We just need to wait until the next halving in 2024.

According to this prediction of stock to flow, bitcoin price will reach $1 million by May 2025. That’s only five years from now, plus a few months. Who of us can think that far ahead, or long term? It’s harder, the younger you are. Still, if you hodl until then, you can plan your retirement based on your bitcoin by 2025.

So far the prediction of bitcoin’s rise has played out well and there is no reason to think that it won’t keep on track toward $1 million and beyond, as supply halves every 4 years. I am going into 2021 very bullish on bitcoin, for the next 5 years and more, despite a temporary dump during the next bear cycle. Let’s first get through this bull run though, and see bitcoin pass $100 000. At least we can start dreaming ahead for now.

That’s only five years from now, plus a few months.

That is actually 4 years and a few months, not 5.

Closer than you think.