With the NFT (non-fungible token) craze in full swing during this bitcoin bull market cycle, it seems that blockchain projects that facilitate NFTs are the flavor of the month. Besides DeFi of course, these NFT blockchains are making big waves and riding those waves of hype, as seen in their price pumps this year. Today I want to look into FLOW blockchain, built primarily to facilitate games and social networks. 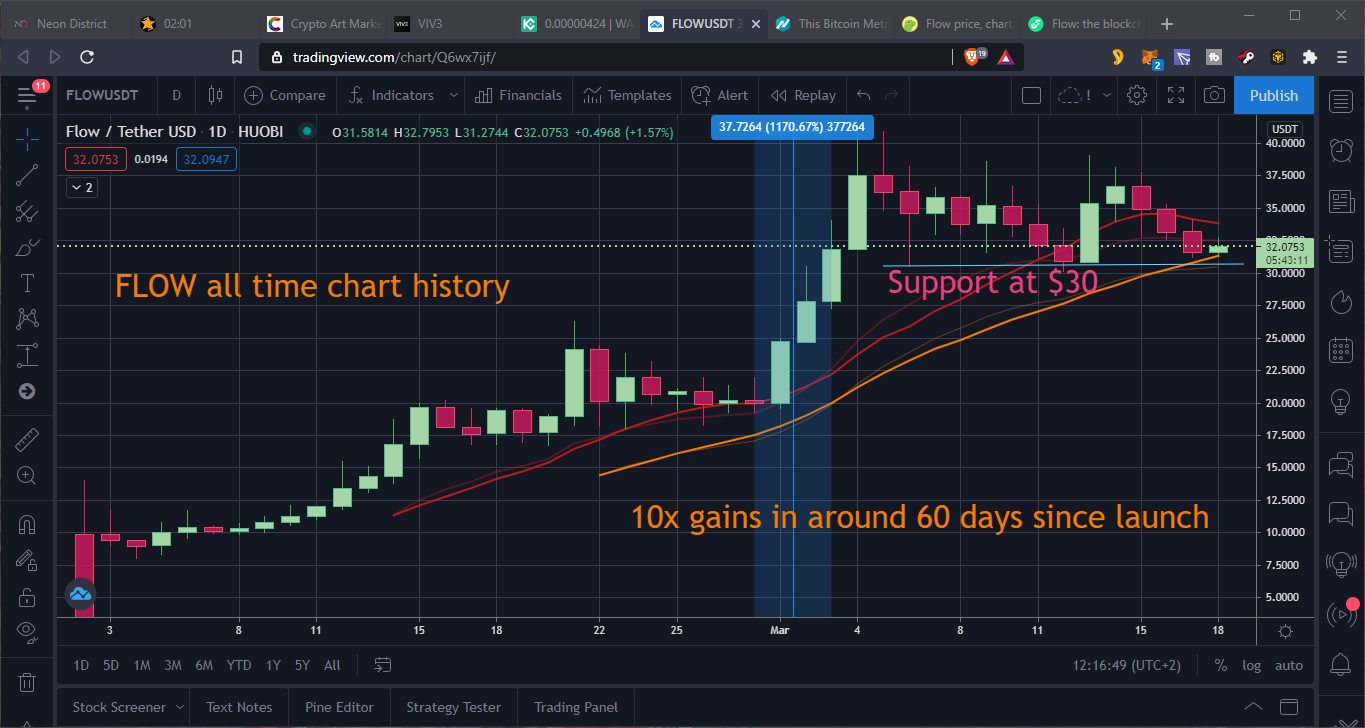 When it comes to making profit on your investment, it pays to be an early adopter who gets in at the launch of any project. FLOW was launched in late January, less than two months ago, and already it’s ranked 84 in global market cap on coingecko.com. Add to that the fact that price went form just over $4 at launch to already topping out at over $40 just two weeks ago, and you would have been up 10x – in the past 60 days alone. Of course price has since corrected and sits at around $32 as of writing.

Such massive gains only come from projects with real use case or excellent fundamentals in their white paper. FLOW is such a solid project because they learned the hard way and came up with the solution that was really needed for a serious problem – scalability and high fees. It all began with CryptoKitties. Dappler Labs, the origin of FLOW just happens to be the same company that launched CryptoKitties, so they know the problems and were perfectly positioned to engineer the solution. And now they are really in the flow, pun intended. It was CryptoKitties – the first ever NFT to appear on the scene back around 2017, built on Ethereum, that introduced us to collectibles, and also showed up the vulnerabilities of any blockchain to clogging or congestion. At the time shards and side chains were used to ease the speed of transactions per second (tps) when so many people were jumping on board the Kitties hype train. Yet still we couldn’t scale or meet the demand for such increased tps. The system slowed down and fees began to skyrocket.

Naturally a solution was needed, and who better to invent it than Dapper Labs themselves, the godfather of CryptoKitties, who knew the birth pains of their love child intimately and more directly than anyone else. And thus the launch of FLOW blockchain, described as fast, decentralized and developer-friendly, which is just what we need for games and apps. No sharding required, great scaling and therefore improved tps.

As a result FLOW has become a valuable and useful blockchain for NFTs and gaming collectibles. Some notable users already include games like NBA Top Shot, UFC, Dr Seuss and of course the original CryptoKitties. Add to that mega angel investors like US venture capital firm Andreessen Horowitz, Samsung, Warner, and numerous others, and you have a sure winning project. This is not some bootstrapped first-timer company. These guys have been around the blockchain for years already with CryptoKitties, and with this kind of investment and product, they are going to be around for years to come.

They pride themselves on the four pillars of the FLOW project, namely

Multi-role architecture (providing scaling for billions of users without sharding)

You may have heard of PoW Proof of Work (Bitcoin) and PoS Proof of Stake (Ethereum) cryptography, well FLOW has come up with SPoCK – Specialized Proof of Confidential Knowledge. It allows any number of provers to demonstrate to a third party observer that they each have access to the same confidential knowledge, according to the FLOW website. I recommend that you do further research at onflow.org if you’re keen to get into more of the details. Overall though, I would give this project a thumbs up, as far as usability, as well as long term investment is concerned, if you’re looking for trading opportunities in altcoins.

We may be a few months behind but the launch was only two months ago and all the indicators align to suggest that FLOW is a project that has a seriously valid use case, massive financial backing, stellar team and proven market value. Traded on Huobi global exchange, OKEx and Kraken means the coin is fully adopted and well established for a project still in its infancy. This is not investment advice of course, but I like the look of this project, even more so since it’s NFT related, which is one of my personal favorite subjects at the moment, as an artist myself, minting my own NFTs on the Hive blockchain.