iconoclastic in LeoFinance • 7 months ago

The beginning of the end for the land based Nations

So, I have been thinking about the way nations work. The world is divided into geographic regions, and those regions have become nations. These nations use their control of the land to enforce their rules on the people born with in their borders. That places a lot of people in the control of governments who have laws, morals, or traditions they may or not agree with. The solution, is a nation that doesn't control any land, a nation where you are a member by choice. 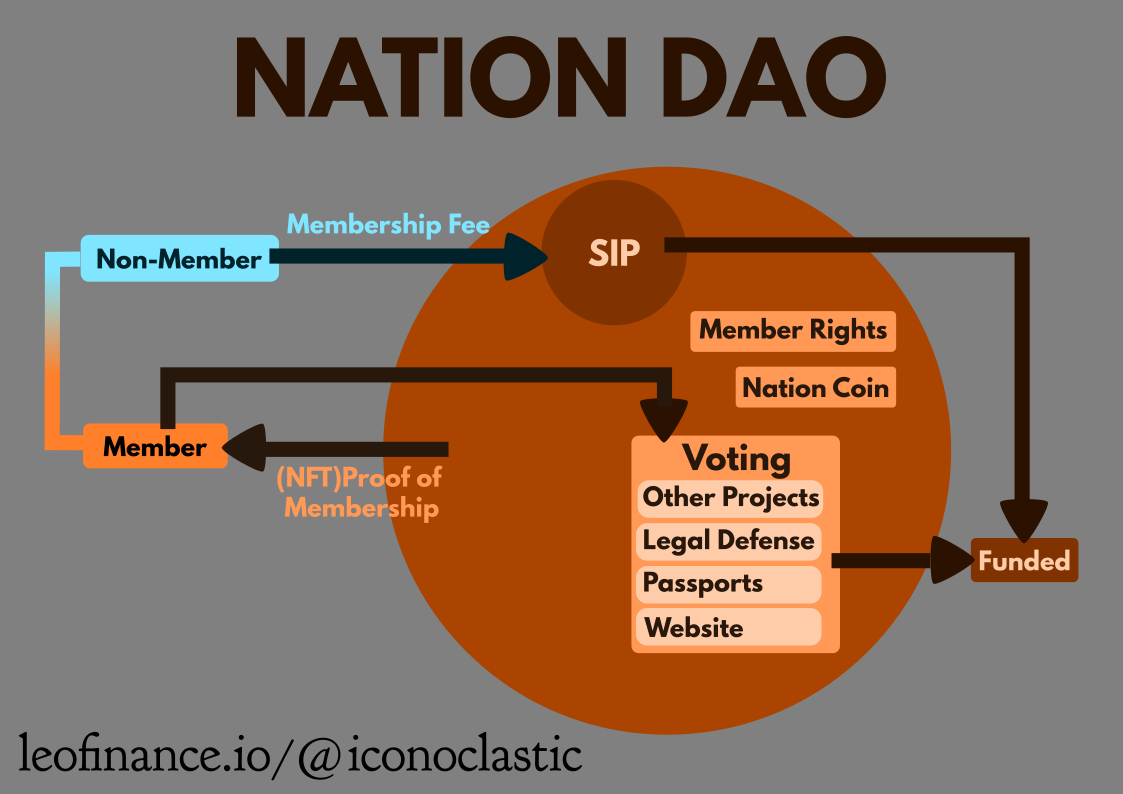 The core of the Nation DAO is following:

Money is the throbbing heart of a nation. Membership fees are paid into the SIP in HBD. The DAO then issues an NFT to the paying Hive account. Only HBD to start with, but expanding into other token/coins that produce income but interest or other methods. I'm not sure if the NFT should be non-transferable, but it solves the issue of having people who have not explicitly agreed to be a member becoming a member by transfer.

Funds in the SIP replace the function of taxes. The continuous addition of funds to the interest bearing HBD pool will allow members to vote on funding proposals. Unused funds will be return to the pool and locked there.

At some point, members may ask to vote to allow non-membership funds into the SIP. There are other things that we will most likely need. We may vote to support a website. We may have a need to issue passports to allow entry to other nations. Legal defense for members rights in land based nations. This will most likely be needed until they fail or completely acknowledge our status as a nation.

This is the root of what a nation chooses to be about and stand for. This is something we will have to figure this out. However, I have a few suggestions.

I am partial to the idea of calling it the Sovereign after the British Sovereign, but I could be talked out of it. This will most likely work like any other tribe token on Hive. Unless someone else has a bright idea that would make it better.

A lot of the ideas here I found from a variety of sources:

The after mulling this over for a bit. The issue is getting people to buy into the idea. For this to work, there really needs a large amount of funds in the SIP. Maybe starting off small will work, but how do you attract the people and by thus the funds.

Are you aware of The Matrix-8 Solution?

I have never heard of the 8-martix solution. Researching now.

These links will help.

Please Join the Matrix-8 New Age DApps community to read additional posts and to be notified if you wish of new content.

Call to Action to help us Re-Member

The above two links are to the same group/room but it's best to join with Element so you will also have access to the encrypted Cause Group rooms. You can join with Telegram using this link if you prefer not to install Element secure messenger for now.

Congratulations @iconoclastic! You have completed the following achievement on the Hive blockchain and have been rewarded with new badge(s):