iconoclastic in LeoFinance • 6 months ago (edited)

In the comments of my previous post about replacing land based nations, @atma.love pointed me to a series of article about the Matrix-8 Solution. Upon reading the Matrix-8 White Paper posts. The contents were 80-90% self-congratulations, religion, politics and diatribes on the state of the world. This completely confused me to the purpose of the white paper. If atma.love didn't seem so hyped about it. I would have quit.

So, my goal is to talk about the Matrix-8 solution while removing everything that isn't about the solution itself. Hopefully providing clarity to those confused or just turned off by the volume of content you have to go through.

Here are the things the creators of the Matrix-8 Solution hold true. With some quotes from the white paper.

Wherever you live today, it is likely that your government thinks it owns you

And suggesting to someone steeped in how rotten we are, that we are really as natural and good as butter flies and panda bears – seems preposterous.

I won't go into any detail about these items, but I will say they "might be true". Make your own decisions. Please, find some info and then for more info with the intent of proving yourself wrong.

The goal of Multi-level governance is to reset the current governmental situation in favor of the 99% of people not at the top. They plan to do this by simplifying the resolution of issues, ideas and motions. While keeping as many people involved in the progress as possible. This could be anything from whether to fund a goal, to the approval of a new law, a simple deal between two parties, or in a business merely to ensure buy-in of the whole organization on a new direction.

Each cell has eight anonymous members. These members discuss the motion to be considered. After this discussion, they send a representative to the next higher level. Which is also constructed of 8 members. The number of total people in the discussion is reduced to an eighth at each stage. So on and so forth until there is one set of 8 at the top of the chain. 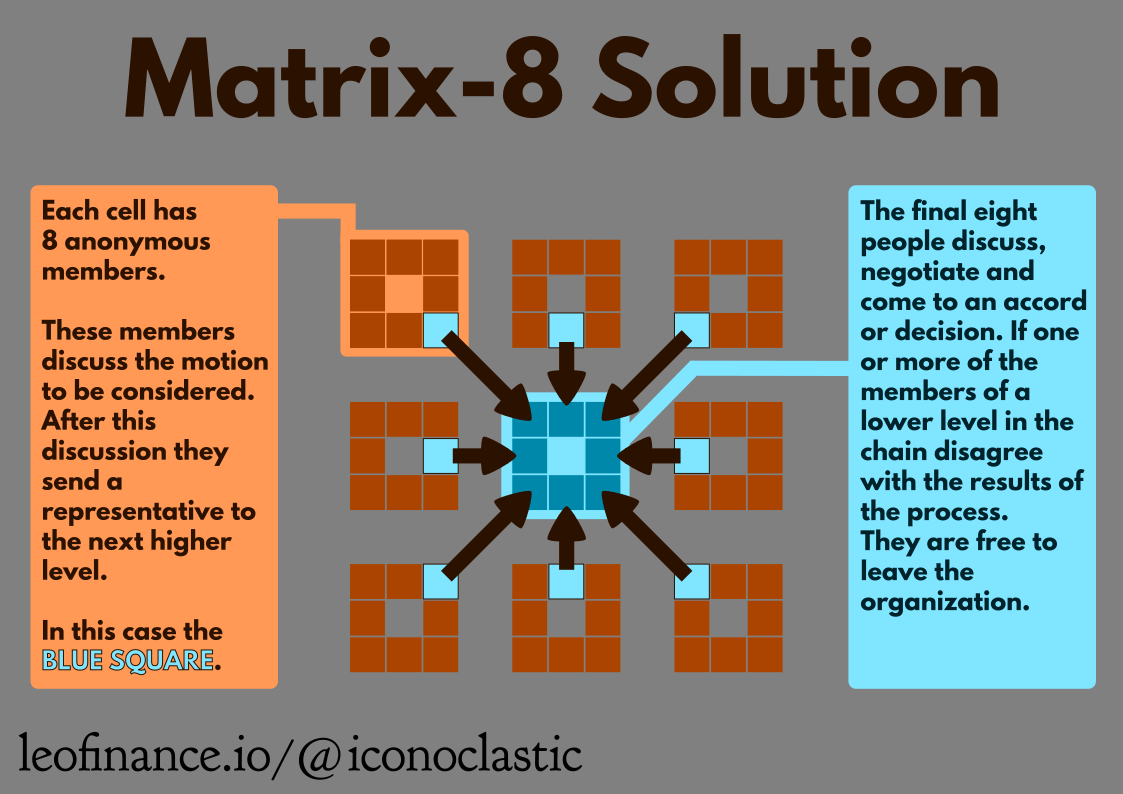 This division of members allows you to only have to interface with 7 other people at any given time to confer with on any given topic or motion. Members of the lower levels of the chain will be required to listen to the talks in the next phase. Which is to ensure that their selected advocate relays their points, concerns and questions appropriately.

Regarding Governance, by utilizing the Matrix-8 Solution, the intended result will be new, and there is a new word to describe it: Democrity. In a Democrity no one is forced to abide by any decision. The ability to opt out is always operant.

The final eight people discuss, negotiate and come to an accord or decision. If they are not able to, they return to the lower levels with new information and considerations. Then come back to the final eight, repeating the process until they get a final decision. If one or more of the members of a lower level in the chain disagree with the results of the process. They are free to leave the organization and are not hold themselves to the rules/decisions of the final eight. In situations where you promise something but fail to deliver will be permanently etched into the blockchain as a way to build a trust score for individuals.

This is what is the Matrix-8 Solution is in just one post. Now, I will admit that this is leaving out implementation details, but this is the core of the idea. It also leaves out the hopes and dream of those involved, but we need to evaluate the idea on its merits, not the hope and dreams.

I hope, I've made understanding this idea easier for you and everyone else in the future.

Many apologies for the late reply. I've been waiting for the right moment.

I really appreciate you post, as it brings more awareness to Matrix-8 and helps refine the message to make it easier to understand.

Then come back to the final eight, repeating the process until they get a final decision. If one or more of the members of a lower level in the chain disagree with the results of the process. They are free to leave the organization and are not hold themselves to the rules/decisions of the final eight.

Note that even when the delegates meeting comes to consensus, that consensus has to be agreed upon by consensus of the originating 8PACs, so it's not that the delegates themselves make the decision. So actually the final decision is that of the whole group. Just to be clear.

So, only the delegates of previously disagreeing cells have to go back to them to convince them on a new position (assuming they were convinced). What happens to the cells that can't or won't agree? Also, what happens to the proposal when the whole structure doesn't agree?