geekgirl in LeoFinance • 10 months ago 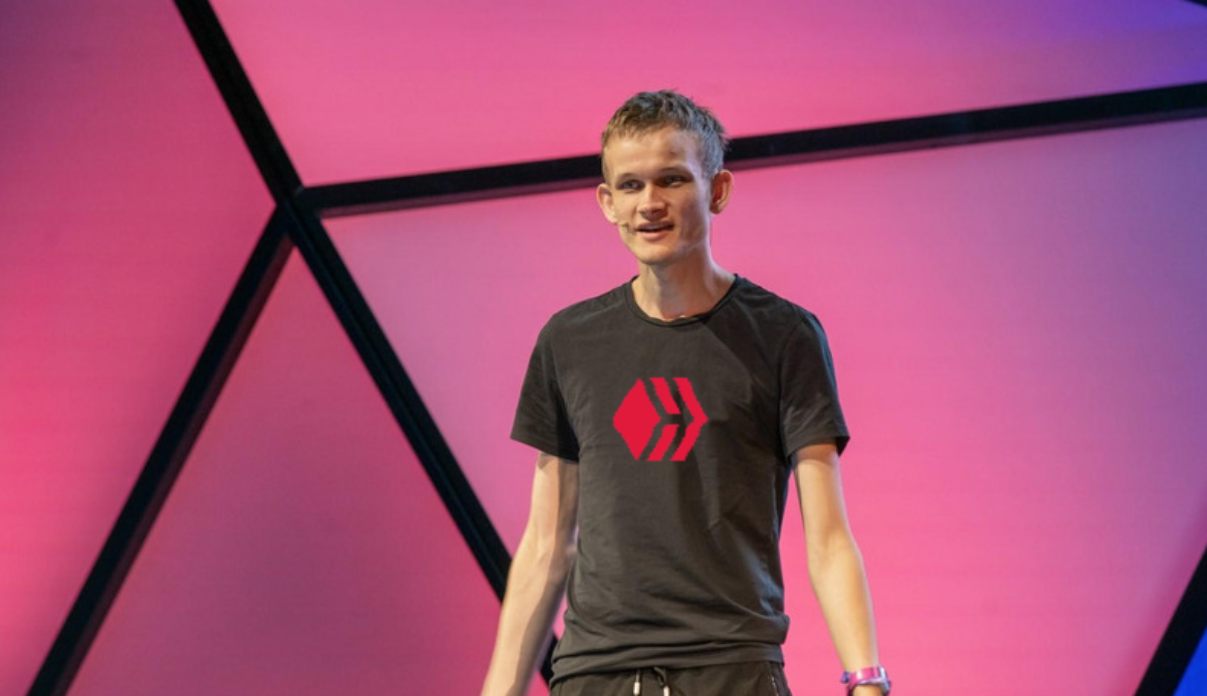 Founder of Ethereum, Vitalik Buterin always had positive views about Hive and shared his thoughts about Hive from the very beginning of it. We have seen in the past how he used example of Hive blockchain and its community in his articles. Recently we have even seen him continue bringing Hive up in podcasts as well.

Today, he did it again. He published an article titled The Most Important Scarce Resource is Legitimacy. Feel free to read the full article. It is an interesting read.

Once again Vitalik uses Hive and its community to explain and make his case for legitimacy as the most important scarce resource.

After talking a little bit about Bitcoin and Ethereum, he starts a section with a sub-title - Coins can be owned by social contracts, he starts to talking about Hive:

To better understand the force that we are getting at, another important example is the epic saga of Steem and Hive. In early 2020, Justin Sun bought Steem-the-company, which is not the same thing as Steem-the-blockchain but did hold about 20% of the STEEM token supply. The community, naturally, did not trust Justin Sun. So they made an on-chain vote to formalize what they considered to be a longstanding "gentleman's agreement" that Steem-the-company's coins were held in trust for the common good of Steem-the-blockchain and should not be used to vote. With the help of coins held by exchanges, Justin Sun made a counterattack, and won control of enough delegates to unilaterally control the chain. The community saw no further in-protocol options. So instead they made a fork of Steem-the-blockchain, called Hive, and copied over all of the STEEM token balances - except those, including Justin Sun's, which participated in the attack.

Then he presents a screenshot of Hive Ecosystem taken from hive.io. It seems obvious he has been keeping eye on progress on Hive. Here is the screenshot he used: And they got plenty of applications on board. If they had not managed this, far more users would have either stayed on Steem or moved to some different project entirely.

Impressive! He continues his thoughts with presenting lessons we can learn:

The lesson that we can learn from this situation is this: Steem-the-company never actually "owned" the coins. If they did, they would have had the practical ability to use, enjoy and abuse the coins in whatever way they wanted. But in reality, when the company tried to enjoy and abuse the coins in a way that the community did not like, they were successfully stopped. What's going on here is a pattern of a similar type to what we saw with the not-yet-issued Bitcoin and Ethereum coin rewards: the coins were ultimately owned not by a cryptographic key, but by some kind of social contract.

It is clear to me Hive, as recognized by one of the brilliant minds in blockchain space, will continue to be used in academic studies in explaining and understanding blockchain, decentralization, and role communities play in them.

It was really nice to see Vitalik trying to stay up-to-date with the progress on Hive, using it for his academic research and explaining his thoughts.

I asked him again on Twitter when he would join Hive. 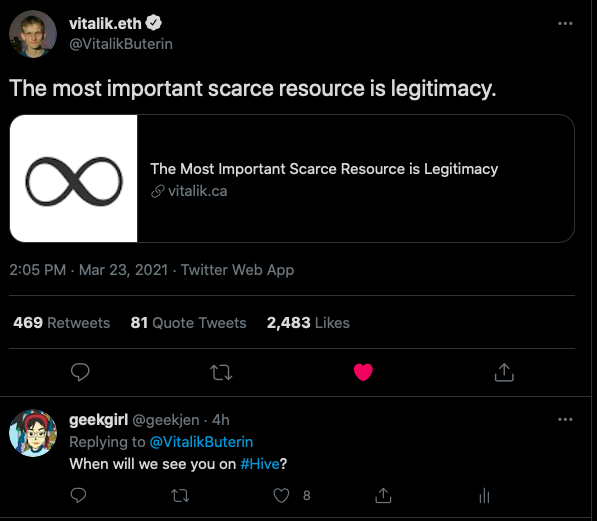 He is probably happy with having his own personal website for his article. But it doesn't hurt to ask. So, I will keep asking whenever there is an opportunity.

Pretty incredible really, the man is in awe of us, there is no doubt he knows its the most significant thing that has happened in crypto since its inception. Without a crowd behind you, you are nothing.

Without a crowd behind you, you are nothing.

This can be our new Hive motto. :)

He could buy more hive than the largest powered up wallet using his lunch money and push posts here from his website if he really took it seriously. Seems more like he's using the story as a convenient tale to illustrate his own thoughts more than anything.

Yes, you are absolutely right. Hive is more like an academic material for his thoughts and articles. Still helps us to spread the word about Hive.

Did he really wear a Hive t-shirt?

lol no. I put the logo on the t-shirt.

Hive is the virus of freedom. Wanna sponsor Vitalik a ETH tribe? Maybe @leofinance could help with Metamask log in :D

I would say, For tracking his posts, it would make sense, like a timeline.

But I also agree, I don't think he would use it :D

Dan was the best example, that he doesn't understand how it works. Bring the Follower to WEB 3.0, and you have a Followerbase nobody can delete or attack the connection between.

Its more about long term value.

That is really awesome. I am going to have to jump over there and take a look at the full article! There is definitely a lot to be excited about on Hive. We are slowly growing stronger and more attractive to the masses every day!

Yeah, indeed he mentioned not owning the token. He's correct about you can not abuse or you can use your power in controlling it. I wonder if he will think of joining us soon.

Great news. It makes more impact when someone as Vitalik promotes an idea (hive) than I.

that's hugeeee news and it also may be one of the reasons Hive's price is pumping!

Let's hope that vitalik can take the step, as it would mean something extremely big for Hive.

Well it doesn't really matter if he (vitalik) enjoys his own space, I don't think it was good you asked when he'd join. Nevertheless; its impressive the way he makes use of hive, makes reference to it in that article. This proves that most of these top guns recognises hive for the super blockchain it is, how community and decentralised rules rather than stunch ownership and indirect control. The steem ninja mined stake was always a weapon and to say it wasn't going to be used never happened. Eventually it was and im glad we have Hive now. Maybe someday he will get to join.

Let's hope he will join one day. I am just glad he keeps using Hive as an example. That is also valuable.

Yeah this is also valuable too as well. Having such a huge follower base it would definitely count for something with time I guess. People are out there searching for a true decentralised blockchain

Always a chance that it will go off if you're sleeping with a loaded gun on your bedside table..

For me personally I never took Steem very serious because of the rampant use of bidbots, haejins and premined stakes.

Hahaha I never did too, nowadays it's just a place for leeching.

Just another sign that Hive is making it's way into the mainstream cryptoverse. It just like advertising, you don't usually buy something the first time you see or hear about it. But if the name keeps popping up again and again, next time you actually see it in the store you probably pick it up and check it out. Every time Hive's name gets mentioned in big stories like this, it will get noticed and slowly but surely people will find their way here to check it out. It's up to us to make them like what they see.

He probably has some hive stashed somewhere. I can bet on that.

I think his got more ETH, BTC than he would ever need and I'm sure people gift him ERC-20's all the time

Too much money ain't enough money. And from my observation, the rich are more interested in power than money. He might look at hive as something of value in the future and decide to throw a couple of dollars in it. For someone paying close attention to the development of the hive blockchain, it would make sense that he has explored it by buying and using some of its dapps

Is it in Hive-engine?

You can deposit on Tribaldex and ERC-20 BAT i think is already live, they also have a diesel pool for ETH HIVE already

Haha I would've asked him the same question when will he be joining us.
I think he has enough projects at the moment now, but I will "speak" it into "being" that he will surely one day join us. I'm trying on that mindset of letting thoughts and wishes being set into being 😅.

lol. Nice! I am usually not that optimistic.

I used to be and no I'm trying to get into that habit and mindset again. And no worries if you're not; we need every unique one of us 😉.

This is amazing stuff and perhaps explains the spike in the Hive price.

Vitalik correctly sees Hive as an important and successful blockchain based social experiment and a forerunner to new models of social and financial interaction.

There is a lot of good news surrounding the hive blockchain.
The award, uphold waitlist, vitalik's article, rumors it defi coming to hive. I think we will see some decent price action in the coming months

It is always great to see an honest assessment about Hive, especially from someone who understands blockchain and decentralization.

Great read... exciting to see someone with his clout speak about Hive like that.

Did he respond to your question?

No, he didn't. I never get responds from him.

Didn't know he followed this community 😄, he's wearing a pretty t-shirt too!

Yes, he is almost obsessed with Hive. lol.

Thats awesome that he keeps talking about Hive. Its good to get the media coverage and the endorsment from such a big name in the space. Too bad he hasn't joined. Maybe one day, hopefully.

Yes, it is free marketing for us. I hope he continues. :)