geekgirl in LeoFinance • 2 years ago 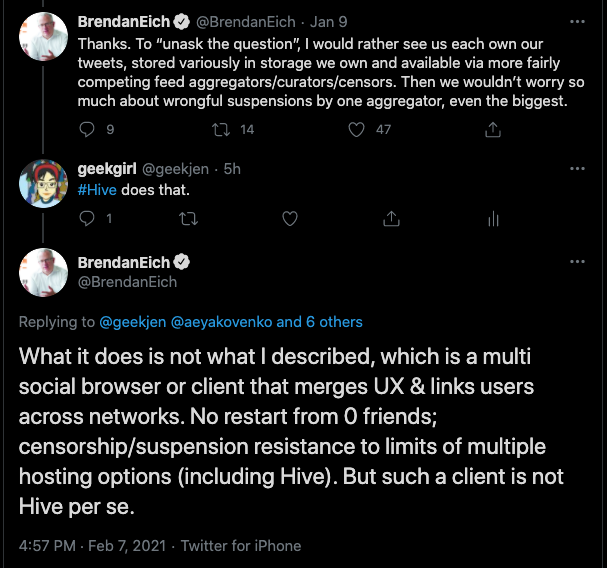 Earlier today, general of Hive campaign efforts on Twitter, @nathanmars alerted me about Brendan Eich showing interest in decentralized solutions for social networking and media. As soon as I saw that, of course I had to let him know Hive is that best for that task. :)

Brendan Eich doesn't need an introductions. He is a creator of JavaScript, CEO of Brave, wizards of the internet, an inspiration for many. I didn't expect a response from him. I shared more detailed response to his recent tweet, just because I like to to spread the word about Hive.

He writes as a response to Nathan:

Check out thread ending near this tweet and the Solana-oriented thread linked from its top tweet. There will never be a blockchain that real users would want to hold posts, likes, etc. Wrong tool for task. But there should be client side multi-social/own-your-posts+likes options.

I left my usual talk about Hive as a response:

"I think I am a real user. I hold my posts, likes, and financial assets in #Hive blockchain just fine. I love the fact only I own my account and access to it. #Hive is great for this but may need privacy features added in the future. If #Brave and #Hive unite web3 will come sooner."

Please read the full thread above and see the interactions by Brendan Eich to Hive users. He offers some interesting insights.

Then as he suggested in his tweet I went to the other thread. Once I read the conversation there, as usual my conclusion was that is what Hive does. And I left a comment saying:

I didn't expect him to respond to that. But he did. That was amazing. He writes:

What it does is not what I described, which is a multi social browser or client that merges UX & links users across networks. No restart from 0 friends; censorship/suspension resistance to limits of multiple hosting options (including Hive). But such a client is not Hive per se.

While yes he disregards Hive as a solution, he does acknowledge that he know about Hive and hive can be part of it.

I still do feel he doesn't fully understand Hive. However, I won't even attempt to respond to this genius of the internet. He is the grand wizard of the internet. That's why I am calling all Hive Wizards to share some technical aspects of Hive and how it is a solution for the decentralized web. I hope you don't mind me tagging some of you for this purpose.

Please read the following thread on Twitter and see if you could explain how Hive is or can be the answer.

Wrong. Very much so.
I am a living proof of that.

And you know what.
Until the moment I read your post I had no idea who Brendan Eich is.

Oh, I am sorry, I thought everybody knew about him. Every Javascript book starts with his story, about the naming of Javascript when there was already Java language by Sun Microsystems and Javascript fight with Jscript of Microsoft, etc. Interesting story.

Moreover, him being the co-creator of BAT and co-founder of Brave probably gave him more recognition in the crypto space as well. That's what I thought.

Regardless, he is an important figure in the internet space. That's why I think his thoughts regarding the future of social media and blockchains are interesting.

When you get a chance get on Twitter and tell him how awesome Leofinance and Hive are.

I'm not a fan of Brave, nor BAT.
Nor am I a code writer. And far from understanding all those Java tricks. This explains it, more or less.

I'm so grateful for your post and that gem, a link on twitter. It gave me two new super interesting findings this morning, Solana and Torus.
It sure made my day.👍💥

I will ask TORUK to keep an eye on you. 😃

I would suggest he probably doesn't fully understand Hive, although he has a point there is only so much we 'own' here ourselves on Hive. His idea seems to some kind of bittorrent type social media where users upload and download and share.

I agree. He also seems to be concerned with scaling to accomodate hundreds of millions of users. This is what he said as a response to @vikisecrets:

Think about dynamics & scale, going big w/o restart from zero.

If you speak to him again, I have his account 'brendaneich' waiting to hand over.

lol nice. You should offer him yourself. I think I have seen you on twitter before. That would be a good gesture.

I think what he is talking about is a hub where you can draw in your feeds from many social media sites, and for example, a friend of yours on linked -in who is looking for a python dev, can get connected to another friend of yours who has a nice looking github account. Your value/rep helps this along. Or I could be totally wrong :D

Just in case, and a gift of course (I've sworn at JavaScript enough times to owe him this much!)

No doubt on that

His got a point there, I never really thought of that, but that would be cool, if you had all these text based blockchain oracles, that are nodes feeding multiple sites. You could even have a site aggregator, so lets say it was a website "I'm Social" and it syncs all your oracles into one site where your profile can be displayed across various tools you use

Indeed, he does offer interesting look at it. That's why I don't feel like responding not understanding all the technical limitations and diffuculties.

Wonder why people are ignoring Hive and only look at solutions that currently only exist on paper (Solana).

I wonder that all the time. Probably they see some flaws that we don't see.

I don't think that is something related with flaws, this man has its own idea of how new social media should be, is probably very similar to Hive and if it isn't should be easy for him to make a HF and start working in his own HIVE based blockchain to accomodate it to his tastes and will.

The issue is that he is too proud of himself to recognize that you've pointed out something interesting that he ignores. He is a genius so "who the fuck are you to tell me what I should do".

Exactly. I will not participate in any conversations with this man so as not to risk causing damage to our cause with any poorly thought out comments. But I also get that vibe from him and I don't like it.

Geniuses or not, people whose pride has made them blind can go fuck their centralized selves. The world is a vast universe compared to any single human being.

I really dislike not trying to express yourself clearly and honestly, which he is doing in his comments.

It's fine if he has an vision of his own not fully compatible with our thing.

That's how it seemed to me too.

Maybe he doesn't know that it's open source?, that should make him think it twice, if he ignores it.

Users want Delete/Undo button for their content and actions. Without this feature you are not really in full control of your content.
Hive does not have that feature.
I don't about LBRY.
Sia Skynet apps could unlink deleted content from data structures and interfaces but bullies could possibly still pin the blob and republish it but I think this is about the same as taking a screenshot of a tweet.

It is possible to edit posts and comments on Hive. While original still will be in the blockchain, Apps will show the updated version. People use editing feature all the time.
Also it is unto App developers to build new to tools to make this possible. For example custom_json feature of Hive allows storing all kinds of text based data. One can develop an App that stores user data in an encrypted form on the database and users could choose who can view the data. When user decides to delete the data they will simply remove decrypting privileges.

When user decides to delete the data they will simply remove decrypting privileges.

By telling apps that they should no longer show a certain encrypted data. You'd have to trust apps to keep the keys safe and to honor your request.

Perhaps a separate decryption service could be built. That entity and the author would be the only entities in possession of the key needed to decrypt a piece of content, each of which would be encrypted with a unique key.

Perhaps the blockchain should not hold the text content at all but only a hash of it against which to test every version that potentially claims to be the original. The content could be self-hosted by the author him/herself or on some sort of peer-to-peer networks if additional resistance to censorship is needed.

There is no reason why an app like this using Hive could not be developed.

Edit feature on Hive only really works for correcting and updating posts imo. Bullies will dig up the previous revisions and bully like they bullied Justin Sun a year ago.
It is true that you can build new apps and features on L2 but why would you use Hive? I see no incentive to maintain my own custom-made L2 for Hive when I could as well host my dapp on an existing smart contract blockchain project without Hive.

Because Hive has feeless 3 second transactions. On Ethereum you need have to spend Gas to use the network, which costs a lot of money at the moment, and probably more and more as ETH value increases. Hive has a Resource Credit system. Just stake some Hive and automatically earn RCs that can be used for transactions.

I have never heard of this guy before and now do. I am no techie though so it is not that surprising but I won't forget incase I stumble upon him on my twitter or online travels. It shows networking does add value and helps spread the word. You are doing a lot for Hive. I am grateful to you. Thank you @geekgirl

Thanks. I am not doing anything extraordinary. Just having fun and sharing about Hive.

Heading on to Twitter right now to check this out. Awesome interaction with Brendan Eich. :)

thrilled for you that u got a response.
I do not know him but use brave and like BAT so I found this interesting.

Sounds like he is looking to combine blockchain ownership with current social media platforms.
No idea how or who could do that, but does sounds interesting.
Why start at 0 followers again? good point.

Thank you. It seems to me he thinks blockchain is not capable to scale enough and handle massive social interactions like 500 million tweets a day.

Brendan Eich is the creator of the JavaScript programming language. He knows about HIVE. The discussion section is often considered the most important part to attract him. I have to thank you.