Vote diversification - LeoFinance curators are upvoting how many authors on an average? ( Python codes )

Good evening to everyone , today I am here with yet another statistical post which focuses on the voting data with respect to LeoFinance only .

I have explained the code above itself . 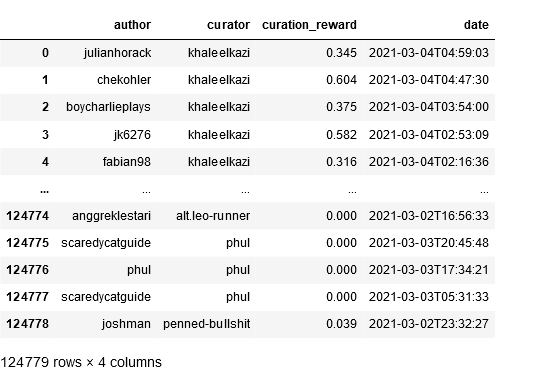 Top 30 users who have got curation rewards from various authors -

What is this data? This tells us that in the past 7 days these people have voted for 200 and above different authors on LeoFinance .

893 - that means the top 5 curators of LeoFinance has upvoted for 50% of the authors who have posted/commented using LeoFinance tag . 1 in 2 ( in 7 days ) - isn't that amazing? If you check the accounts - most of them have good amount of LP or good amount of HP .

Note - some are auto upvoting accounts but others aren't , I am sure I need not mention here who actually curates manually in the above list , you all know it

Average number of authors upvoted by curators on LeoFinance ( per day )

5.19 - This is not an impressive number . This tells us either of two things

5.19 means one curator per day is earning curation reward from 5 authors only .

Proportion of curators based on number of authors they have voted I am probably in that 11-50 pile and I should look to diversify a little bit more. I am surprised that we have so 6.3% is 100 people or more. I might be in the 51-100 pile if I am lucky but I have keeping my activity to my feed and leomarkettalk.

Well if you wish to know it I will post your stats here , let me know .

I usually avoid posting others data unless they are okay with it.

Yea I would like to see my data. Maybe I am lagging behind the pack by not diversifying enough.

Not really bad but yeah could be better.

Yea it could definitely be better. At least I am in the top 25% for upvoting unique authors. But I really should be in the 100+ unique authors given the amount of comments I have been making everyday.

That weirdness aside, can you do the curation for @babytarazkp please?

can you do the curation for @babytarazkp please?

34.91 is the total curation reward earned by @babytarazkp

You have got curation rewards by upvoting to 838 different posts/comments, 329 unique authors .

Thank you for the info!

Don't mention , let me know if you need any other data , I will get them ASAP.

Thanks a lot sir :)
If you need the curation data for your account please let me know :)

Quite a solid stat here. It will help encourage quality when it comes to curation on Hive's second layer tokens. I hope to see this out for other tokens.

I will a similar one for Sports and CTP on monday because I have something already planned for today and tomorrow post so.

According to me we will hit it in around 30 days or so :)

If #projectblank is here within 10 days then yeah we can bring over 200 users to LeoFinance within 20 days I guess.

You are absolutely right and one of the main reason for that is - dust system.

If you want your curation rewards total from 25th Feb to 4th March ( now ) let me know in the comments .

You have got curation rewards by upvoting to 449 different posts/comments, 236 unique authors .

One of the best . When it comes to upvoting unique ( or different authors ) you are ranked 22nd for the above mentioned period :)

Thanks for continuing to do this! Great information!

No problem at all :) My pleasure . Let me know if you need your data , I will provide you.

Okay thanks! I don't think I do right now, but at some point in the future I might definitely need it! 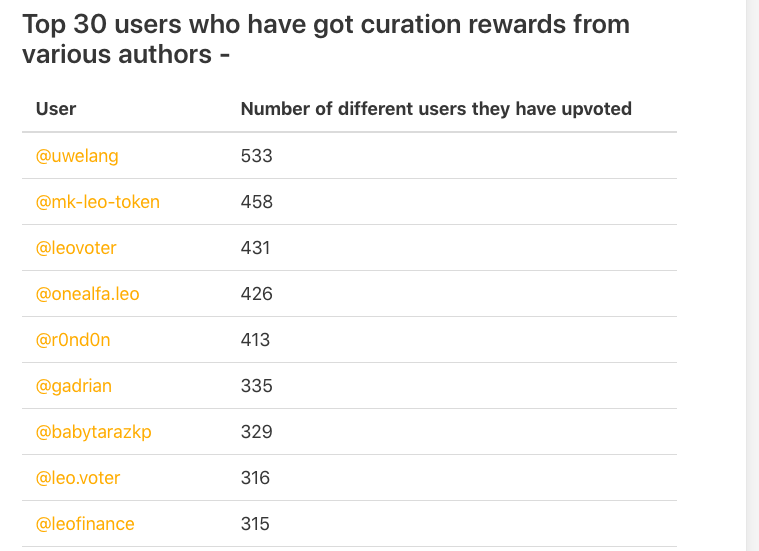 A shame I have only a few Leo Power

Well LP doesn't matter. It's the intention that matters. Do you have a upvote bot running or something?

That's amazing then because couple of people in top 10 have bot running which upvotes all the #leofinance tagged posts but you have done incredibly well . Good job.

And how are my weekly curation stats :-)?

I will send that to you as soon as I hop on my laptop . Sorry for the delay.

no worries, take your time, it is not that important :-)

At the risk of embarrassing myself, I would like to see my data. It can only help me improve. :)

Well I personally feel you are doing well .

Here is your data -

From 25th Feb to 4th March ( till 5 AM UTC ) -
5.891 is the total curation reward earned by @oldmans,
You have got curation rewards by upvoting to 114 different posts/comments, 49 unique authors .

I would like to see mine, I Know that i need to get better.

Thanks, I was a little less active this week.

That's not so bad, is it? I do like having a large stake so I can earn without posting that much.

Yes definitely , curation is as important as posting on Hive blockchain . Just imagine what happens if all curators took a break for a week lol .

Another great use of your analytical mind! lol This stuff is so interesting. I'm glad you like putting it out. I'd like to see my number if you get a chance please. Thank you!

By the way, what did you mean by "dust system"? Is there something I should know about that?

Dust system is only applicable to Hive and not for tribes , it means that any post or comment which has less than 0.02$ rewards will be turned to dust that means you won't get that payout. So if my upvote is worth 0.01$ I usually vote post and not comments because of the fear that I will lose my curation rewards if others won't upvote the comment and push it above 0.02$.

Thank you! So these numbers are just voting. Not actual comments, correct? I rarely vote on something I don't comment on. But I would get more curation reward if I did. Is that what this is telling me?

Yes you got it right . You have considerably large LP and could earn more curation rewards but you aren't upvoting to your full potential is what the data says.

Interesting, could have guessed that it looked like this but nice to see data that support it. More communities need to look at this and see what works!

Absolutely . Monday I will post about Sports and CTP , let's see what's happening over there.

I'd love to know my stats if yer offering!

From 25th Feb to 4th March ( till 5 AM UTC ) -
106.86 is the total curation reward earned by @revise.leo,
You have got curation rewards by upvoting to 128 different posts/comments, 69 unique authors .

Sorry for the delay in replying .

No worries about the time - I'm in the green pie I'll take that!

Be interesting to see this by votes on top level posts and votes on comments.

I'm sure I'm on votes to 60 odd authors because of comment voting mainly.

Ah well right now the script doesn't differentiate between both . I will certainly take that into consideration the next time , is that okay?

Hey that's cool - it's a great tool as it is, but it would be an awesome addition tooo!

Definitely . If this weekend I find sometime I will implement that too :) Thanks for the advice.

Congratulations @amr008! You have completed the following achievement on the Hive blockchain and have been rewarded with new badge(s) :

Hmmm.... I upvote a lot of other authors.

Hello @offgridlife . You most certainly upvote a lot of people but this data is only regarding LeoFinance posts/ comments.

I just checked and you have got only 8 curation rewards in LEO for the said period .

Most of your curation rewards are 0 that's why you haven't been included in the top 25 list .

No sir , your curation rewards for Hive is very high .

What I sent was for LEO . Your LEO curation rewards are 0 because you have only 60 LP right now .

It would be good to see such stats for the sportstalk and ctp very soon. Its always helpful for the bloggers to understand the timings when whales are active and the whales who actually vote 😁