LeoFinance witness - How many have earned more than 1000 LEO this month but haven't voted Leo as witness? -Python code + DATA and CHARTS

Good evening to everyone , I hope you all are having a great day .

We all know how much LeoFinance team has done regarding onboarding of people . I am not here to talk about that , the thing I want to mention in this post is - how can we help LeoFinance team in this regard?

One obvious way is to delegate our HP to @leo.voter so that HP available in that account is used to delegate to new users .

I am here to talk about the second way , let's get LeoFinance in top 20 - that way the Block producer reward will keep on adding HP to LeoFinance more than what they are gaining right now at 30th position .

# Proxy and No proxy accounts

Proxy accounts are those which haven't directly voted for witness but have used proxy to vote for witnesses indirectly .
Non-Proxy are those who have voted by themselves.

First , I gathered all the data from TxAccount table from HiveSQL and bifurcated the account with proxy and without proxy and stored it in CSV file .

The following data is used to retrieve the data from CSV and store it in DataFrame. 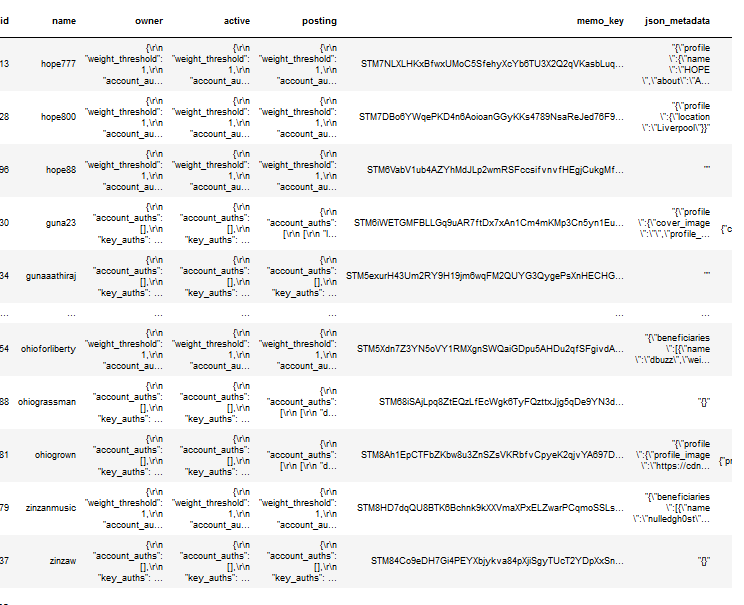 What we need to look for is - witness_votes column -

What have I done above?

In the above code

That is it for ' No proxy account votes ' . Now let's jump to ' Proxy accounts '

Now I have used Hive-Engine API to gather the data of how much they have earned from Jan 1 to Jan 26. Since we need all the LEO issued to particular user from Jan 1 to Jan 25 , I have used groupby username and sum() , this will give us - 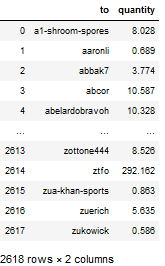 LEO earned in this month from Jan 1 to Jan 25

This is pretty simple , I have segregated accounts based on amount of LEO earned .

If I count the number of users -

Now comes the main part - How many users have voted to LeoFinance ?

Those who have earned less than 100 LEO , witness votes proportion. Those who have earned between 100 and 1000 LEO , witness votes proportion 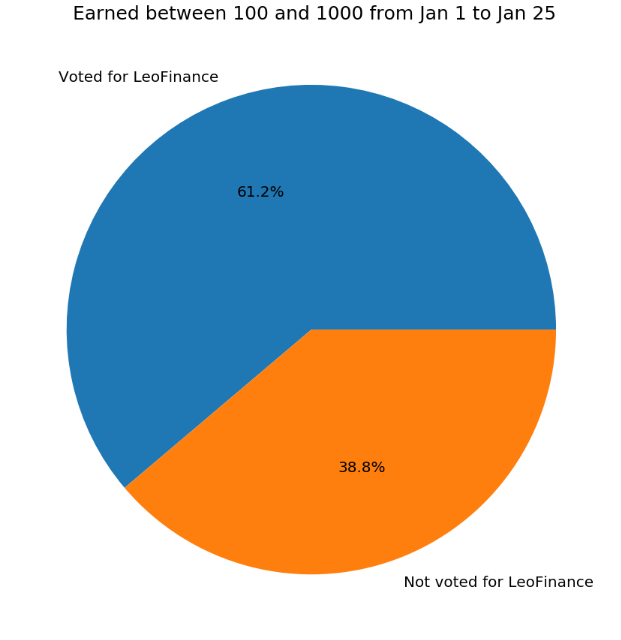 What do you think of the above ?

I also tried to see how much Vests resides in the accounts who have earned over 1000 LEO .

Thank you for reading , let me know what you think about this in comments . Regards,
MR.

If all of those who didn't vote yet would vote for LeoFinance, in which place will LeoFinance be?

As @revise.leo mentioned , it will only add 1.4 M HP from those who have earned 1000 LEO or more but if we take everyone who is even earning 1 LEO then we will add more than that and most probably will break the Top 20 .

I may be wrong about this, but 1.4 M HP sounds about right.

Probably not enough to lift LEO into the T20 - I think a witness needs one of the top 2 accounts voting for them to guarantee it.

But even so you would have thought everyone whose earning on here would vote leofinance as a witness!

Agreed, I thought those whales would definitely vote for it as a witness. On a side note, I should probably fill up the other 20 empty witness votes sitting on the side for my account but I have been too lazy to research into it. I mainly voted for things that I currently use.

I should probably fill up the other 20 empty witness votes sitting on the side for my account but I have been too lazy to research into it.

I mainly voted for things that I currently use.

But this is most important.

I too have some slots left but I only vote those whose work I know or have come across. I should also fill it soon by researching.

It's good to use them all up!

I hear what you are saying. For me it's about the intent to support the platform . That is why I have calculated the vests for only those who earned more than 1000 LEO this month and not less than that.

There might be people who are earning less than 100 LEO but still have voted it as witness ( example - me ) .

1.4 M HP as you said might not get Leofinance above 20 but we aren't calculating proxy here. What if these people ( whales ) are set as proxy by other users ?
Did I make any sense?

Yes you're making sense - I can't imagine proxy votes would make that much difference!

I don't think many people proxy their witness votes out.

Voted for LeoFinance directly without proxy - 878

Voted for LeoFinance through proxy - 1664

Although is that accounts, do you have the HP figures?!?

Even before I was actually posting/commenting on Leo, I voted for the Leofinance witness. I did so because the google search results gave me more accurate results compared to the rest. I am kind of surprised there are so many people who make over 1k who didn't vote but those in the 100-1k range is a bigger percentage.

Yes that did surprise me too. But it is what it is.

Great post. I was thinking that Leo could advertise their witness a bit more. I believe it would be great if more people voted for leo so that it gets a spot in top 20.

You are right but I think it is more on us ( the users )than the team to voluntarily take action don't you think?

It's like voting in real life , it's not only a privilege but also a duty( unless the election is rigged) .

Thanks for stopping by and sharing your thoughts:)

You are totally right that it's up to us. Unfortunately a lot of users are not aware of the fact that they can influence life on the blockchain a lot with their votes.

I completely agree with you.

Can we compile the list of those who are not voting so we can contact them and get them to vote?

I have the complete list of usernames who have voted and who haven't . I thought it is better not to mention them in the post because they might get offended.

Well it is public information. It is not as if we cant go to the witness voting page and see the names.

It is just a pain in the ass to manually cross reference with the parameters you pulled up.

As for getting offended, it might help. If they are getting compensated with Leo yet do not support the witness node, then perhaps they dont merit the support of upvotes.

By my calculations, the witness server for Leofinance needs about 21 million more HP.

Some of those people can help move it closer.

You know I had put the table of who haven't voted and just deleted at the end.

Since everything is transparent , you are right it will help if we can contact them.

It's almost midnight here -
In the morning I will post it in the comments here , what do you say?

While I don't totally understand all the code stuff I do understand the charts and I think its sad that so many users who have earned so much has not voted and those who have earned the least has voted. In my opinion those high earners seem to just want their share and don't care about supporting Leo completely. It only takes a minute to vote so why haven't they voted?

I actually replied to you earlier I don't have any idea where it went lol.

Anyway let me post again, the codes are for those who knows it to cross check the data retrieved.

The charts are for everyone.

It only takes a minute to vote so why haven't they voted?

I have no answer to this.
Most probably lack of awareness? Or laziness?