How I was hacked and how hacking ruined a project.

yintercept in STEMGeeks • 3 months ago

In my last post I suggested that it would be fun to publish a book.

A much more interesting question is: How can one develop a web site to engage in quality research and write books? Since this post is about programming, I will put it on StemGeeks.

It turns out that the very first web site I create was designed for academic research.

The site no longer works. So, I decided to tell the story of how my web site was hacked and how the hacking experience completely destroyed a project.

Just take a break and ask: How do you think the bozo writing this text was hacked. Was it a cross-site scripting, a sql-injection attack or something sneakier.

Let's get back to my web site. I wanted to develop a web site for academic research.

Schools at the time focused heavily on Java; So, I decided to write my web site using Java Servlets.

That was my first big mistake.

Discount web sites did not offer servlet hosting; So I searched far and wide and found a web site dedicated to offering the highest quality hosting possible for the reasonable price of just $50.00 a month.

I was ecstatic and launched into programming my site.

My site was really fun. It was a web based system for engaging in research. Since the site was focused on research, I found that I was able to cover hosting costs by selling books through Amazon links.

I was in geek heaven.

Now for the hack.

The owner of the site had a heart attack and died. Unbeknownst to me his incompetent partners inherited the firm and quickly fell into bankruptcy.

I suspect that the bankruptcy court had a hard time selling the hosting firm as hosting servlets is labor intensive. Big tech wants to invest in commodity hosting, and not niche hosting.

Anyway, the web host was purchased by an organized crime family.

So, all of my work was now in the hands of a company that wanted to make money online doing organized crime.

It turns out that crime organizations don't inform the customers they acquire companies. I just went along thinking all was well good with my web host, when things had gone horribly wrong.

Anyway, really bizarre things happened with my sites. All of my relationships crumbled as the criminals engaged in identity theft, spam and other forms of fraud ... using my web sites.

My credibility in the programming world diminished and the sites behaved in completely unpredictable fashion.

Me, being me, I figured that the behavior must some how be due to my code. I threw hundreds upon hundreds of hours in to debugging the code and finding no problems. I finally gave up on servlets and moved to discount hosts offering PHP.

There was a huge amount of data corruption from the site. They may have installed a virus.

I kept having strange behavior and an inordinate number of disk fault errors with the site.

I don't know how this happened. I moved the site to two different discount hosts. Both hosts had total disk failures with my site.

NOTE, it was not until after I switched hosts that I stumbled onto an article detailing how a crime family bought a web host and committed crimes. They were busted and thrown in jail.

How many hackers are thrown in jail.

The moral of this story is that anyone who has access to the server can hack the server. I don't have the ability or desire to build my own data center and sit by a computer. For society to function, we have to build webs of trust.

I am now using VPS drives hosted by vps.net.

This problem is not unique to me.

In fact, this whole blockchain recently suffered a similar incident.

An unprincipled rogue named Justin Sun captured the blockchain. This forced everyone to scramble and recover with a new blockchain and a new name.

Justin Sun's take over of Steemit is called capture.

I think many people have suffered from this process. People work really hard to build up a company; then a private equity firm steps in to rip the heart out of the firm to make a quick buck.

It is common for a brand to build a good reputation. A second rate company acquires the brand and uses up the good will of the brand creators.

It happens in government. A department works hard to accomplish a goal. The next administration steps in to use the department as a vehicle for delivering political favors.

Capture is a disgusting thing.

As for this post, I had a web site for recording research. It could have been used for publishing high quality articles.

Bizarre things seem to happen when i try to rebuild the site. I recently tried to rebuild it with PHP 7.0.

In my PHP 7.0 build, the PDO object sometimes failed to return the first result in a query. I spent all of my time trying to debug a data connection object that returned the wrong results. i had two different copies of PHP 7. SQL queries returned different results.

I spent hundreds of hours researching the problem. Submitted a bug report and the people at Zend treated me like i was a piece of dirt.

Because I spent time debugging PHP, I was unable to get the site back up and running. I guess I should fix the program.

For the picture I snapped a photo of a Steam Engine derailed on a golden keyboard. 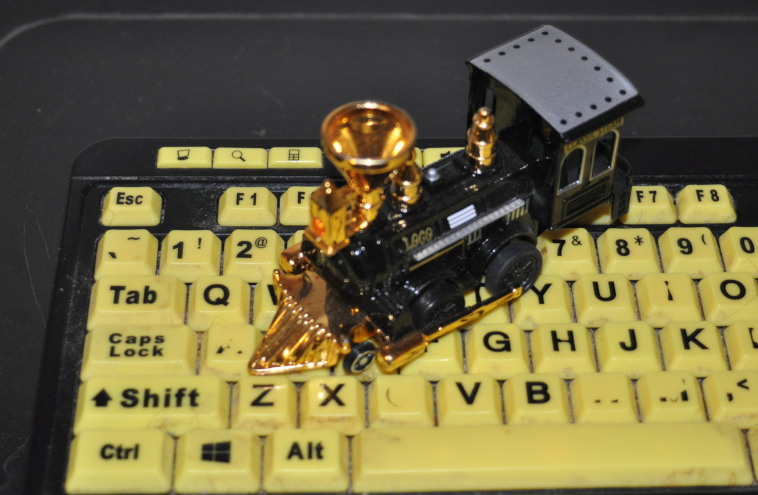 Sad to hear that this happened to you....You are doing a great job😊

Capture happens to all of us. It is strange that I now have a psychological block to fixing the site.