If you haven't heard of the Steam Deck, it is Valve's new portable console that is set to change the gaming industry forever.

The Steam Deck is a full blown PC in a portable form factor. This isn't your typical low power portable console though, the Steam Deck sports a Zen 2 AMD processor, 16G of ram, and up to 512G NVME storage. Performance is suppose to be high enough to play most games with 30-60 fps while on battery.

The device is built by Valve, the company behind Steam, the largest game platform in the world. This means the Steam Deck will launch with more games than any console in history. Potentially even more than them all combined.

The Steam Deck runs an updated version of SteamOS, a Linux based operation system built for gaming. This means not every game will be compatible with Steam Deck, at least not initially but many Windows based games will run flawlessly due to the partnership with Proton.

Here's where I think things get really interesting. If you are not familiar with Proton, it is a project built for Linux to support as many PC games as possible without complicated porting. With Valve's financial and technical resources means this is likely going to be a massive burst of support, funding, and attention for Proton and Linux Gaming.

Like the Nintendo Switch, you can plug the Steam Deck into a TV or even use it as a with a keyboard and mouse.

The Steam Deck is not looking at just supporting games like Minecraft and Shovel Knight, full AAA titles are supported. You can bet Valve will put all their resources to improving the supported Game titles after launch and for the foreseeable future.

I pre-ordered a few weeks ago and likely won't make it in the first batch next week, but I suspect a month or two I should get notified. I am really looking forward to checking this out, but I am really excited for what it means for the future of Linux gaming.

Valve is planning on launching a portal where you can see what games in your Steam library will work on the Steam Deck. They said they are trying to get this out before launch day, so it should be really soon. As someone who has had a steam account for ages, my collection is massive with around 220 games in my collection. Many of these I never got around to playing or finishing, so this will be an awesome way to revist my back log. 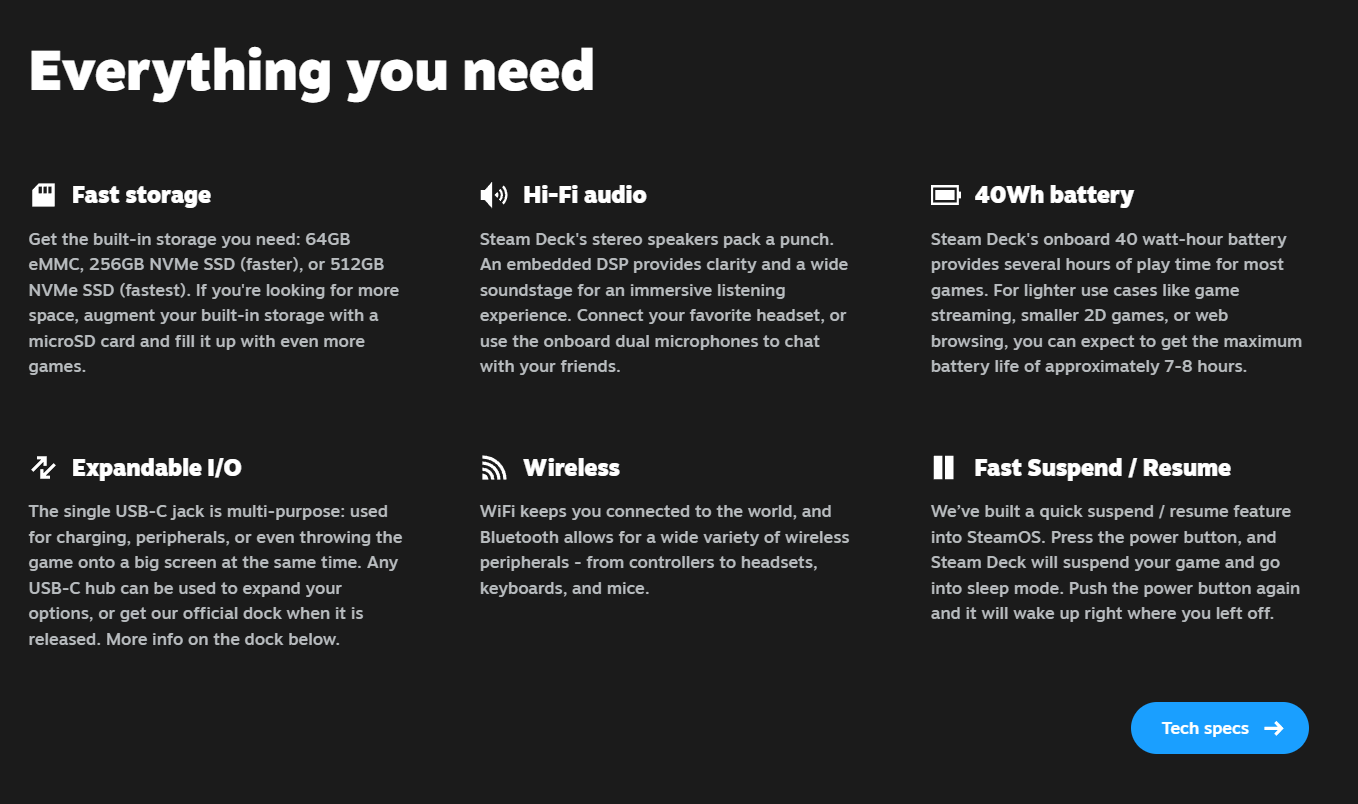 All images are from the Steam Deck website unless otherwise stated.

I honestly can't wait for it. It looks amazing hardware wise and I am super stoked, despite not needing any on-the-go gaming, I am definitely going to get one. Worst case scenario... I'll gut it and turn it into a server.

Woa! This is impressive at around $399 to play awesome games like Forza Horizon 5, Ocean horn, Resident evil revelations 2, and much more?
I think it's very worth considering!

How many Hz can it play at though?

I think it will be heavy depending on the price. The hardware component looks good, but I'm not sure the typical steam user is a mobile gamer.

Mobile can be a huge advantage for " play with friends local" without the need to move a computer. But is it a thing?

Btw, what kind of internet router can you recommend if you would buy a new one? :D

No doubt this is a blow on the table to the portable consoles, in fact since 2020 I'm seeing the growth of GPD and I clearly said that if a company was looking for a way to find something similar with the part of being at an affordable price would certainly hit the market. This is going to be great, I hope I can also get it as it seems perfect to me, in fact, it's almost similar to my currently PC lol, I can't imagine how crazy is having it and being able to play in my car on the way to a trip for example. I look forward to seeing your impressions about the Steam Deck when you have it!

if they manage to convert the games for this device successfully I am thinking that there will be a revolution in pc gaming, I mean, a portable pc where you can play without additional cost if you already have it, to all the games in your Steam catalog (perhaps the largest library of video games of all) seems to me a most attractive proposition

They claim you can play every game in your steam library “technically” because it is a pc and you can just install Windows on it.

That being said, they without a doubt will do everything in their power to grow SteamOS. They have already started to improve Proton and I believe there is already other projects started to add even more options.

I think it is will be huge for many reasons but it has to be marketed in stores,

Valve is planning on launching a portal where you can see what games in your Steam library will work on the Steam Deck. They said they are trying to get this out before launch day, so it should be really soon. As someone who has had a steam account for ages, my collection is massive with around 220 games in my collection. Many of these I never got around to playing or finishing, so this will be an awesome way to revist my back log.

Wow this will really make sense nice upgrade from valve it will help in making choices on what game to play or skip probably getting your collection and sorting them from your favorite down.

Wow! This is another great innovation in the gaming industry. It is kind of costly at least in our currency, but just by looking at it, you wanna play with it all day long!

I hope it is what they promise and not a total disappointment, when I hear the word console and gaming I just don't think it's going to be as perfect as they paint it.

It will be interesting to see how they adapt PC games to a console and how they will handle the crossplay issue, will PC gamers play against Steam Deck gamers as well? If so that would be quite a complex issue in the competitive arena.

And, I really find it curious why you would expect to play games using Linux based console. Whenever I think of that OS I don't associate it with gamig related stuff.

You wouldn't play COD on a console the same way you would on PC (unless you want to install a keyboard and a mouse).

You can play on a controller on a PC but honestly I wouldn’t play this type of game on a console. But you can hook up keyboard and mouse.

I'm in Australia unfortunately :( "This item is not available for reservation in your country"