Mineral Mondays #54 A Trip To The Mohawk Mine 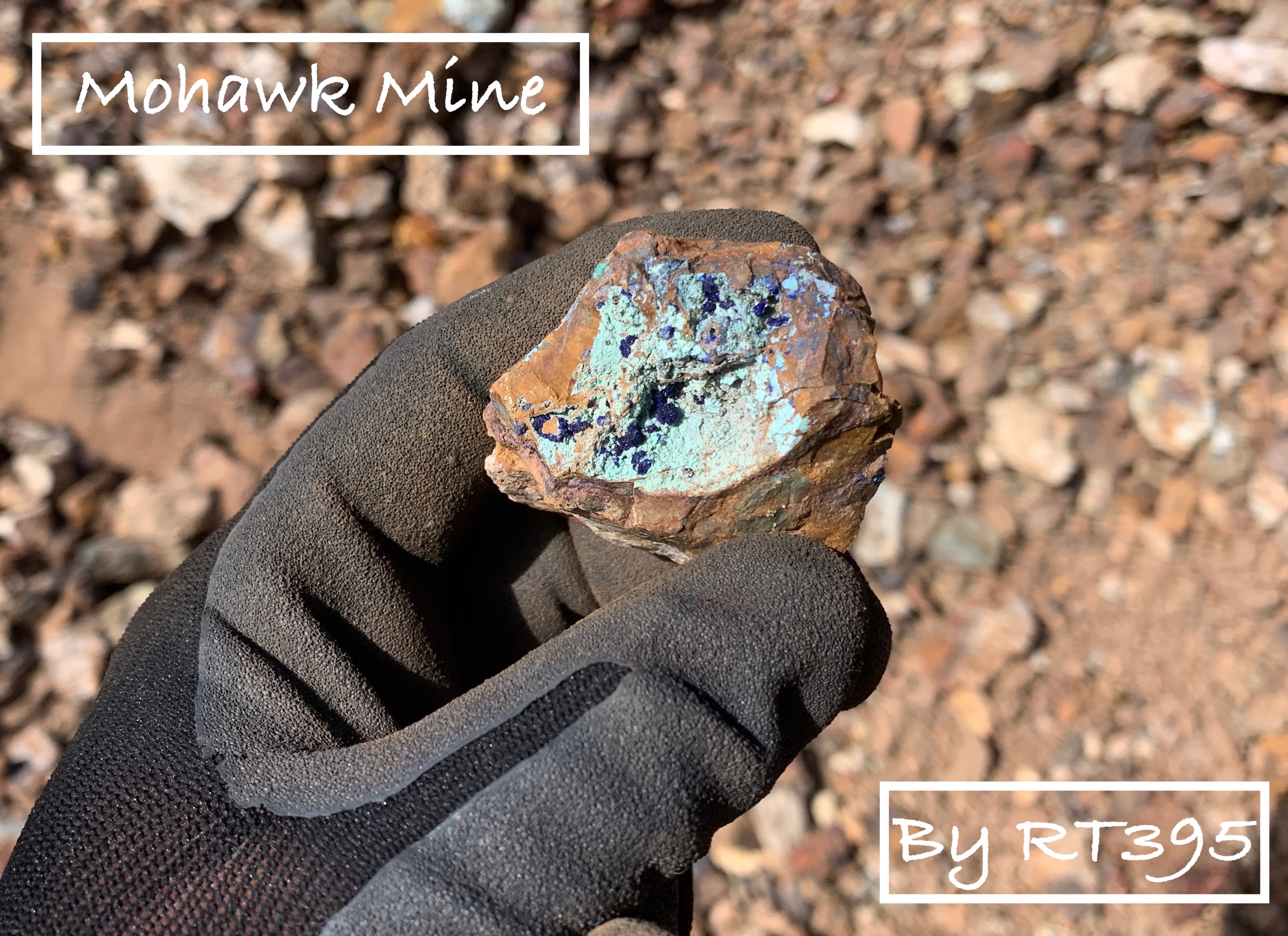 Cause if I go out, you're coming with me....
(Lyric from a Dimension song I altered a bit to fit my travels.)

Two weekends ago I headed back out to the Mohawk mine and here's how it went.

The Mohawk mine is located just before the California/Nevada border just off the 15 Freeway on the way to las Vegas. You may have caught a glimpse of it's massive ore bins if you have ever driven from LA to LV. Not to be mistaken with the much bigger Mountain Pass rare earth open pit mine a few miles past the Mohawk though. The ore bins date back to the 1940's at least, June 9th, 1946 to be exact. That is the date someone scribed into the concrete foundation of a long gone structure that once stood on it. 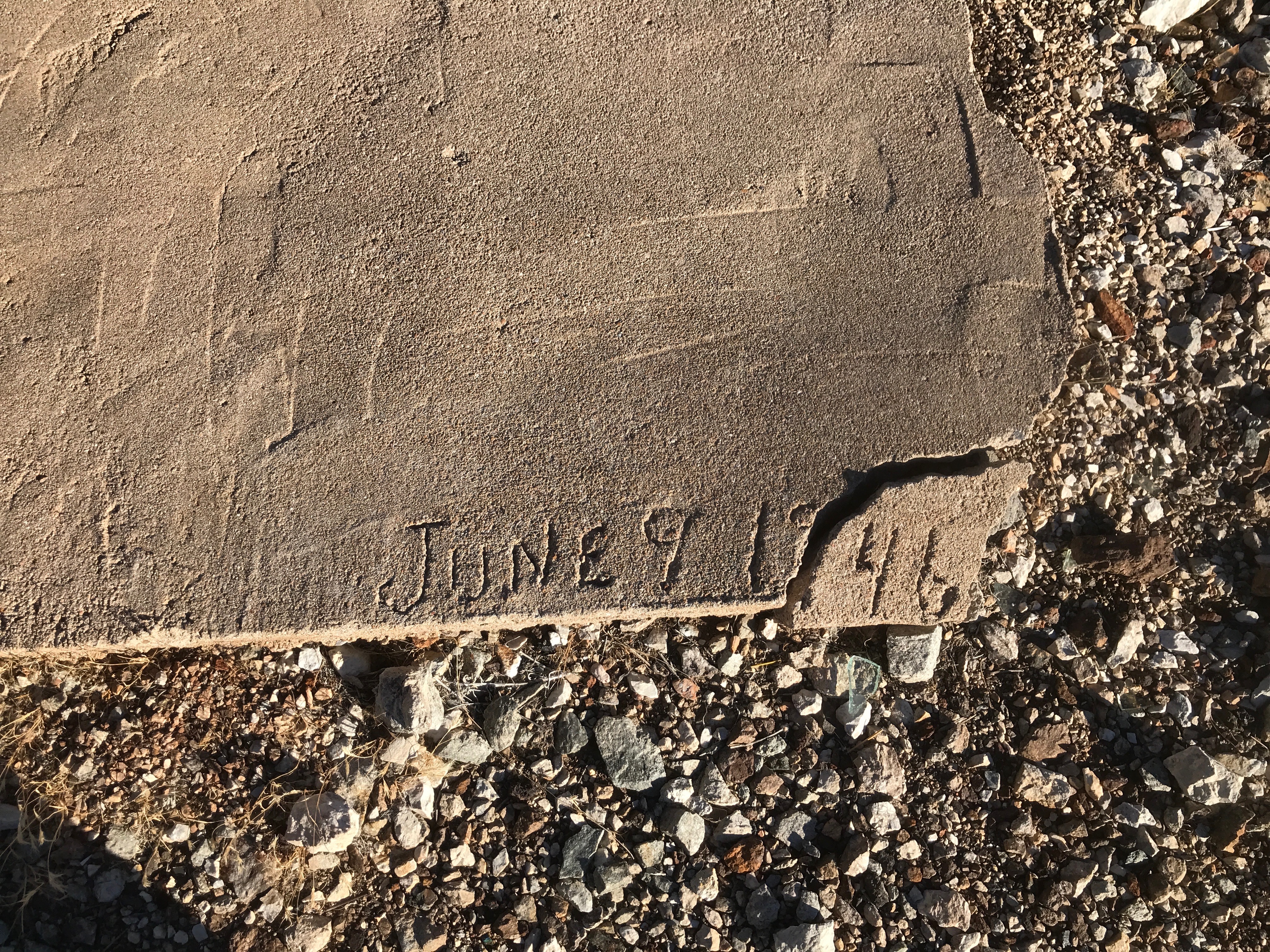 Thankfully very nice of people(me) have left the broken "46" in place and not take it home with them as a souvenir.

Actually, the mine dates back much further to 1898 when a man named P.R. Washington filed several claims on Mohawk Hill. For the next several years the claims were prospected and sold back and forth until 1916 when the Ivanpah Copper Company acquired it and leased it to J. E. Layton and R. B. Saunder who really started working the deposits. Between 1916 and 1921 They pulled out 2700 tons lead ore valued at $70,000 during their time. I couldn't find any information about the copper, gold & silver pulled out during this time.

After 1921 the mines lay dormant until 1942 when major production started again. This was due to the ongoing WWII need for various minerals including lead and copper. I am assuming that is when the ore bins were constructed due to the use of metal on them, including more modern lag bolts and sheet metal on the ore chutes. The T-tunnel is where the larger ore bin is located. It was the larger of the two main workings on this side of the mountain. Even though there are more tailings here it seems the better specimens are at the West workings so that is where I focused my time. 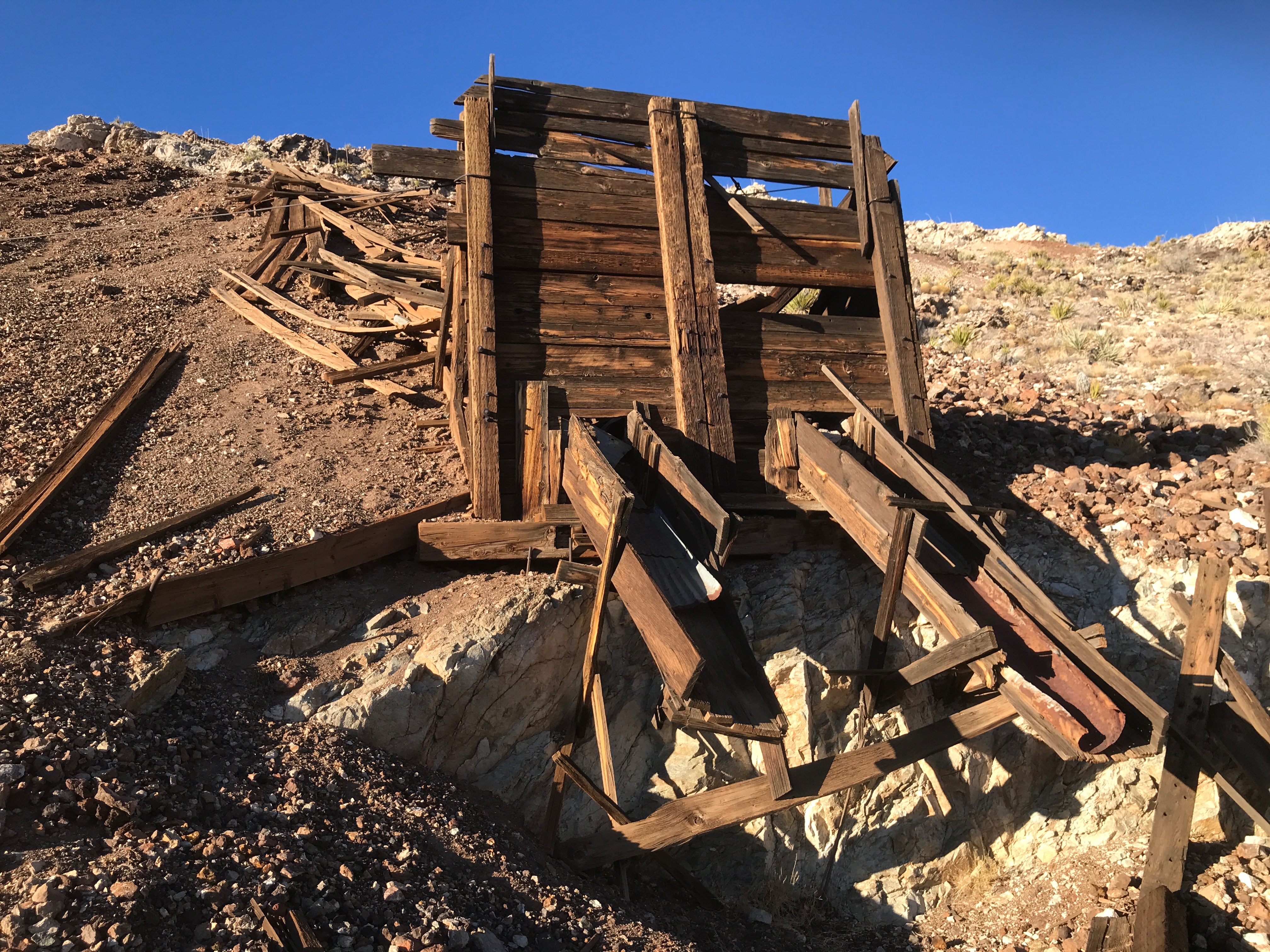 The West workings consist of 3 locations, upper, middle and lower workings. The upper most adit, which has the ore vein exposed to the surface, was most likely where the mining started.

Looking down the stoped-out upper most portion of the ore vein at the upper workings. Another view looking down the stope, but closer up. 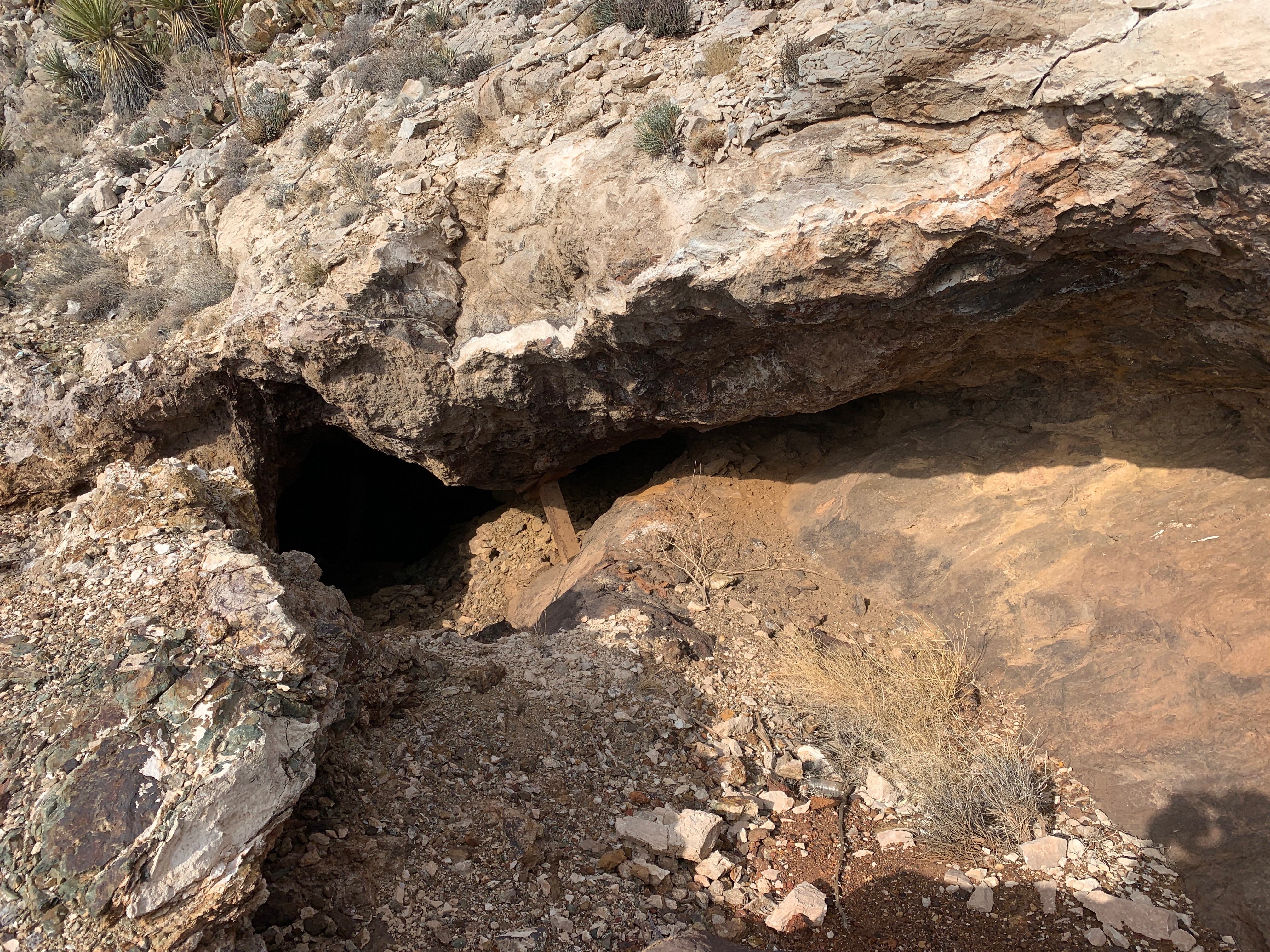 The center of the stope with two, short adits. And the ore vein between the two adits. Most likely iron oxides, copper sulfides, lead, zinc and maybe some gold! 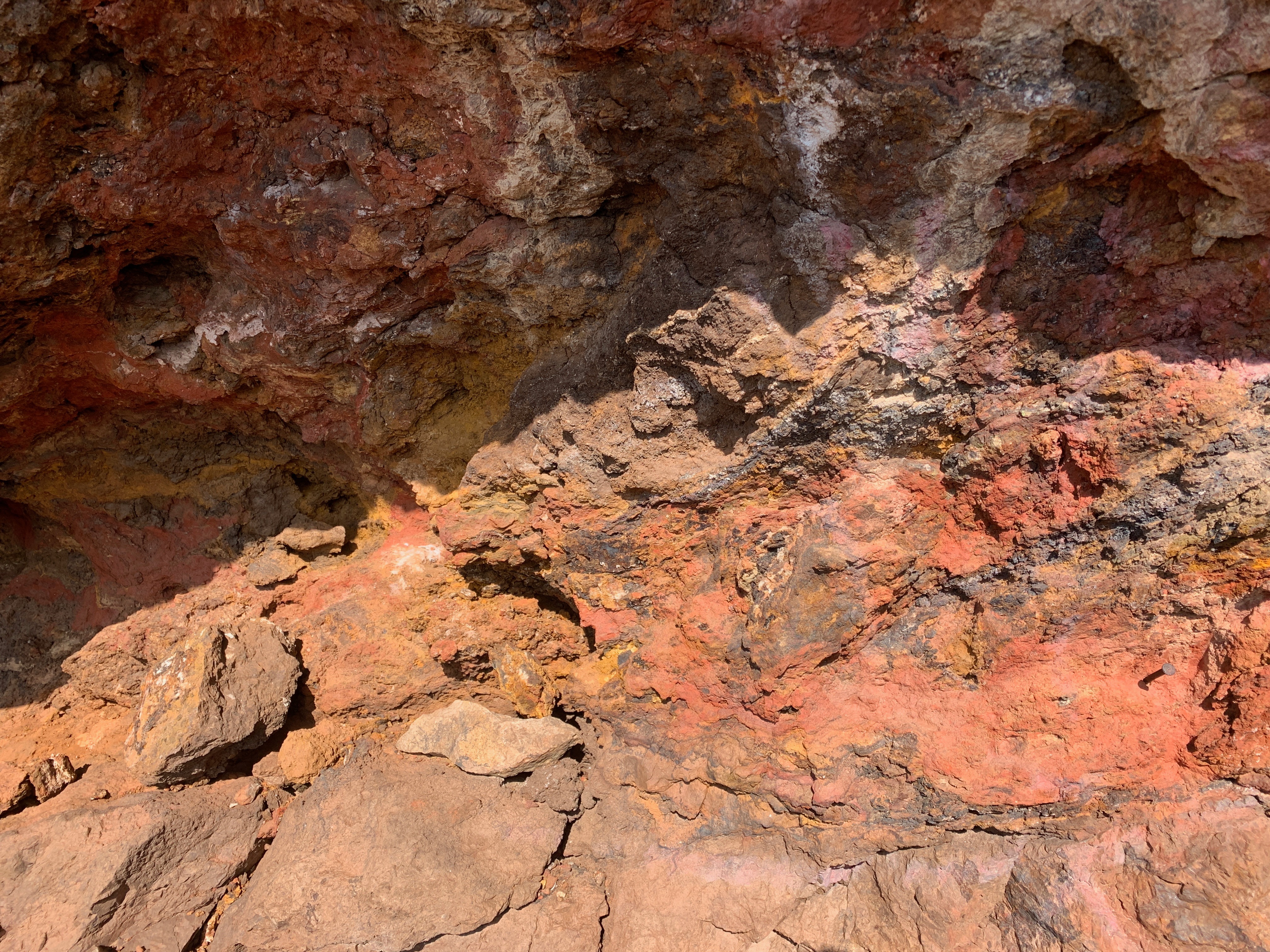 From this point the miners followed the vein down the mountain, both inside and outside with the two lower adits.

The better minerals specimens though appear to have come from the two lower adits.

The midway workings have an adit and a vertical shaft that would ruin your day if you fell in. 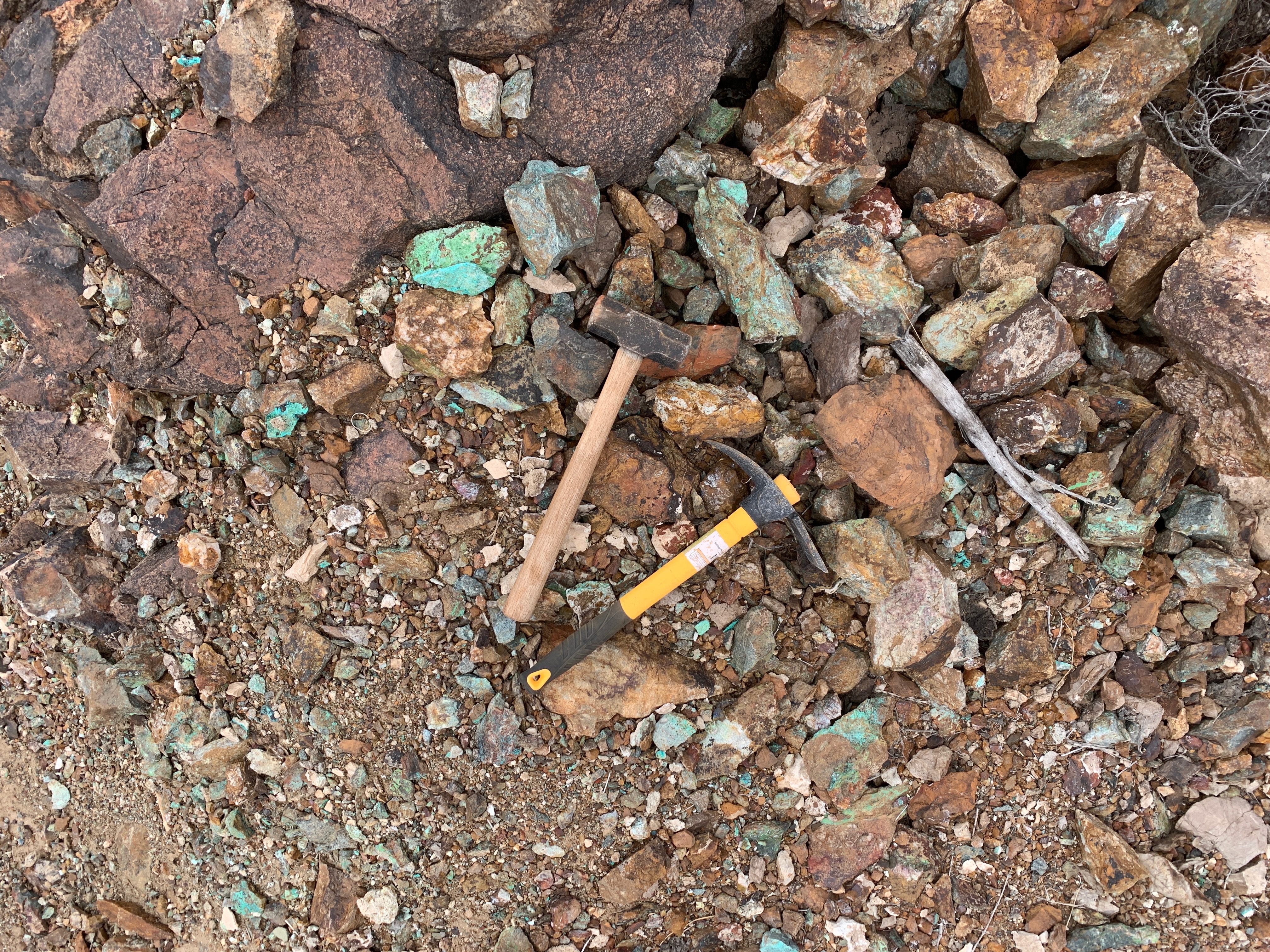 (Chrysocolla tailings just outside of the vertical shaft)

I searched this are for a bit, but really only found chrysocolla, LOTS of it. There were several exposed veins of it and it appeared people have been mining it recently. I wasn't here for the chrysocolla though, I was here for the rarer minerals like tsumebite, carminite, rhodochrosite, plumbojarosite, and maybe some gold!

After inspecting the midway adit I headed down to the lower adit & took lunch on top of the tailings pile. The view was great, the weather was great and life was good. Peace and quiet away from social media, Southern California traffic and all those other societal headaches.

After lunch I rolled over, got on my knees and started inspecting the large tailings pile I was sitting on. To find the good, rare minerals you really have to get down low on the ground. You'd be amazed the stuff you miss when standing up versus bending down. Oh to have eagle eyes.

The top of the tailings contained quite a few small azurite specimens. Even though they are small, well formed balls of crystals can be made out. It's definitely rewarding finding your own specimens. 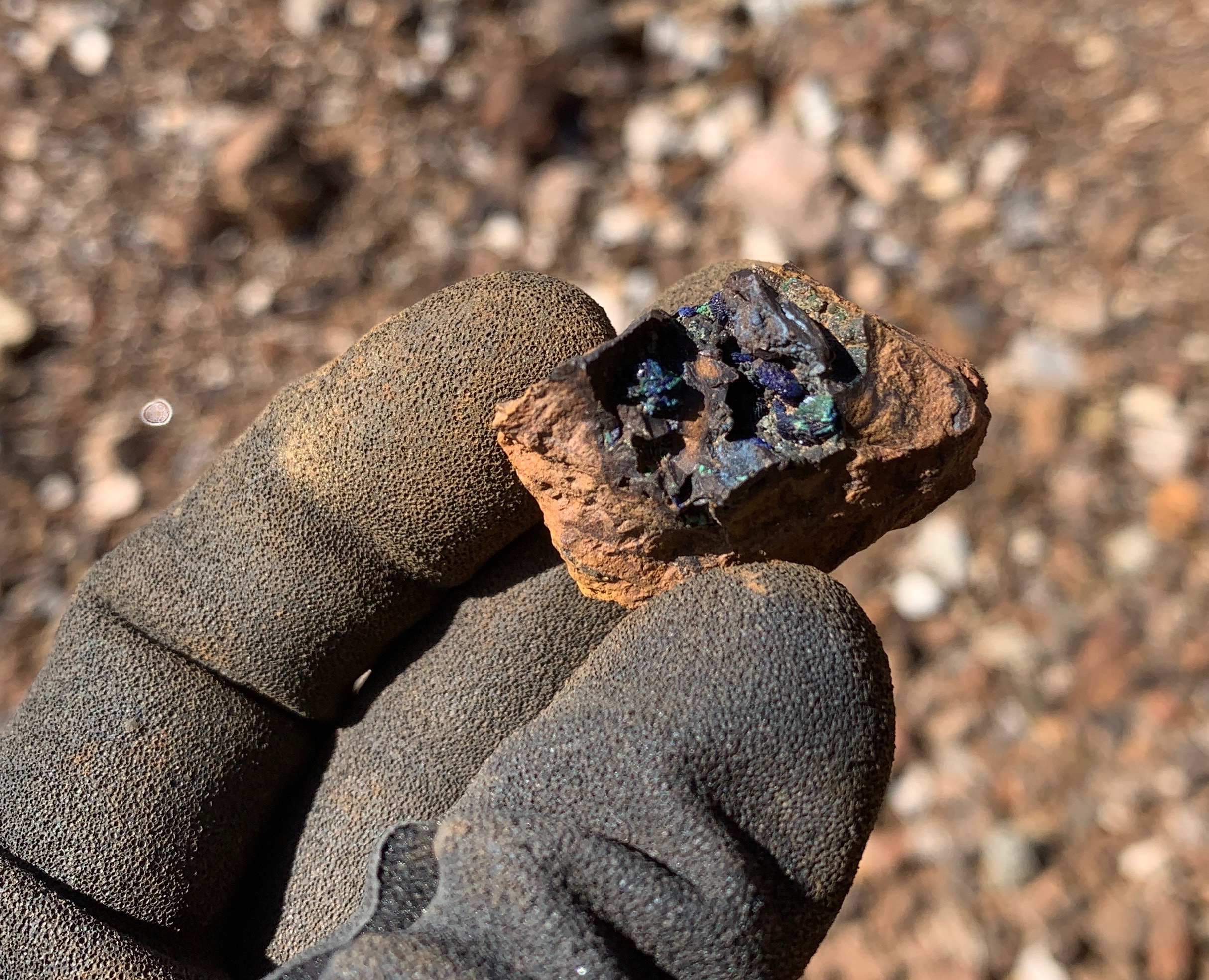 A small specimen of azurite(blue) crystals & malachite(green), both copper minerals. A closer view of one of the "balls".

I moved onto the tailings and things started to pick up. I was finding a lot of the minerals I was looking for and hopefully some of the rarer ones. Those are usually very small and need viewing under a microscope to see their crystal structures. Many are green too and so most people will just look at them and think malachite. For example this conichalcite. 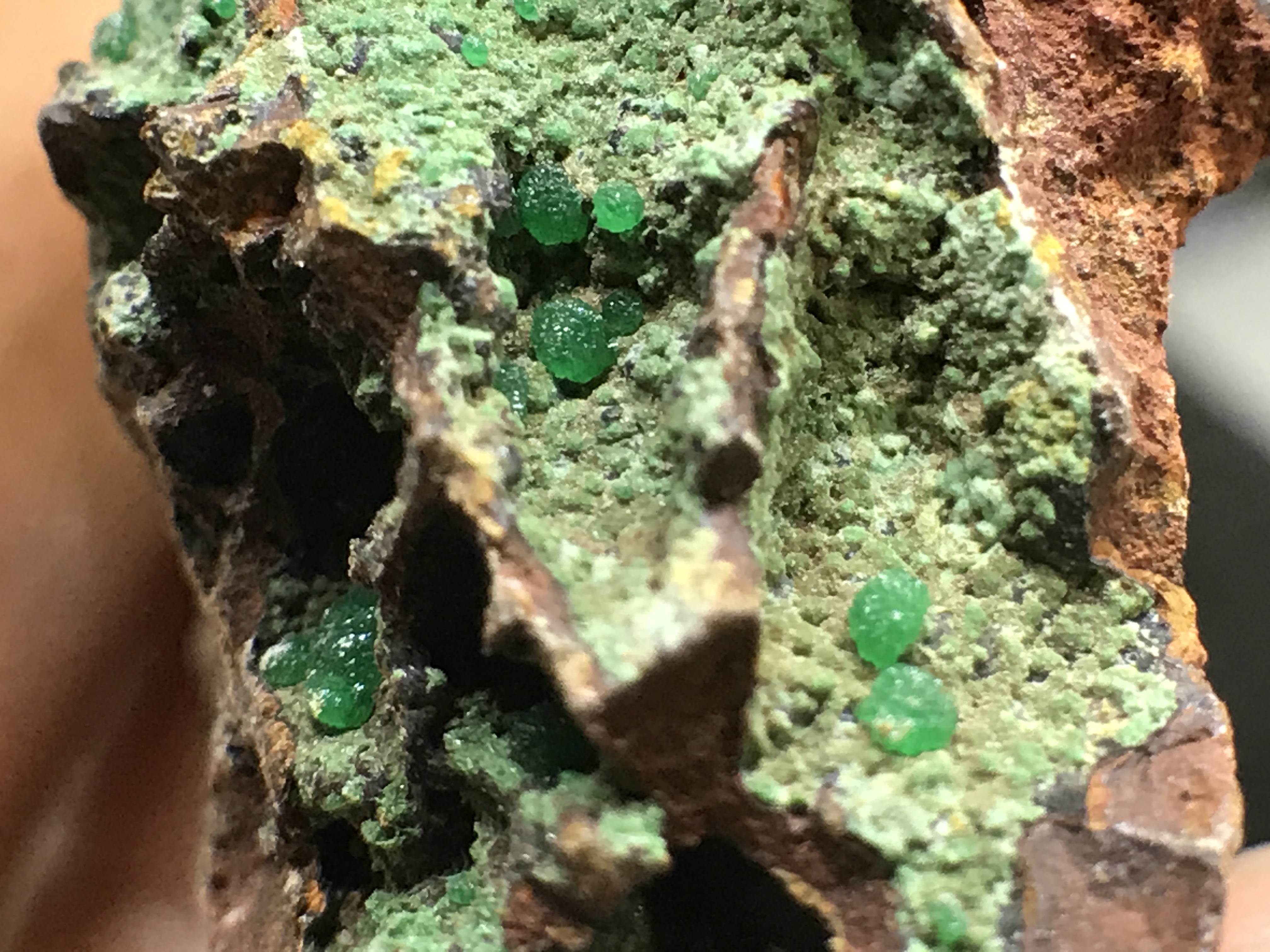 It looks like malachite to the layperson, but the color gives it away. It's almost a fluorescent, semi-translucent green color lets me know it's either conichalcite or copper-bearing adamnite. Or it's some candy left behind by a pack rat lizard. I won't know until I can get a closer look at the crystal structure.

This cool azurite specimen was found on the tailings too. It consists of azurite balls on bluish fraipontite a zinc/aluminum mineral, which looks like chrysocolla in this case. You may notice the micro conichalcite at about 9:30. Then on the right side there are a duller green crystals. These are probably a lead/copper mineral called duftite. Their crystal structure is visible under a 30x loupe and they appear to be duftite.

Moving on this little guy easily stood out in the bright sunlight. The crystal sprays are very reflective in the sunlight and easily caught my eye. But what is it? 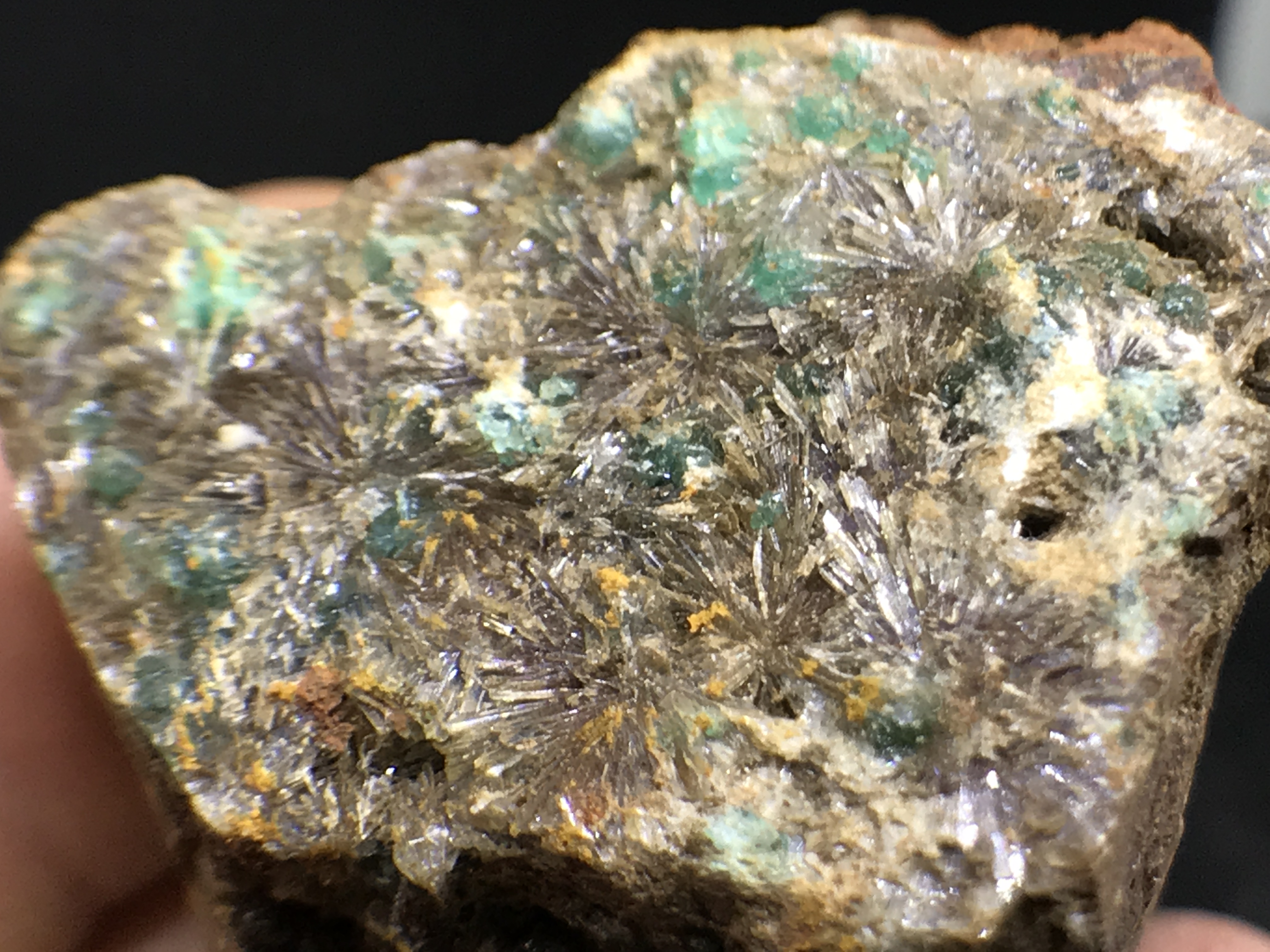 Well the first step in identifying a mineral is usually color, then crystal structure, then associated minerals and matrix and lastly crystal structure under a microscope. So what is it? Well initially it looks like a mineral called hemimorphite, but it could be a few others that form fans or sprays of crystals. Until I can get it under a microscope I am sticking with hemimorphite though. Hemimorphite is a more common mineral here. The green balls are most likely copper-bearing adamite and the yellow may be sulfur or mimetite.

As I moved around the tailings pile I thought to myself, people have no idea the work miners and collectors do to bring them beautiful gems and minerals. While I was above ground, just scrounging through "waste rock" it takes time to find the good stuff and I was probably covered in toxic lead dust.

One of the last pieces I picked up was almost a "leaverrite" otherwise known as "leave her right there". The color was stunning and I thought un-natural, like something manmade had scraped against it or something. 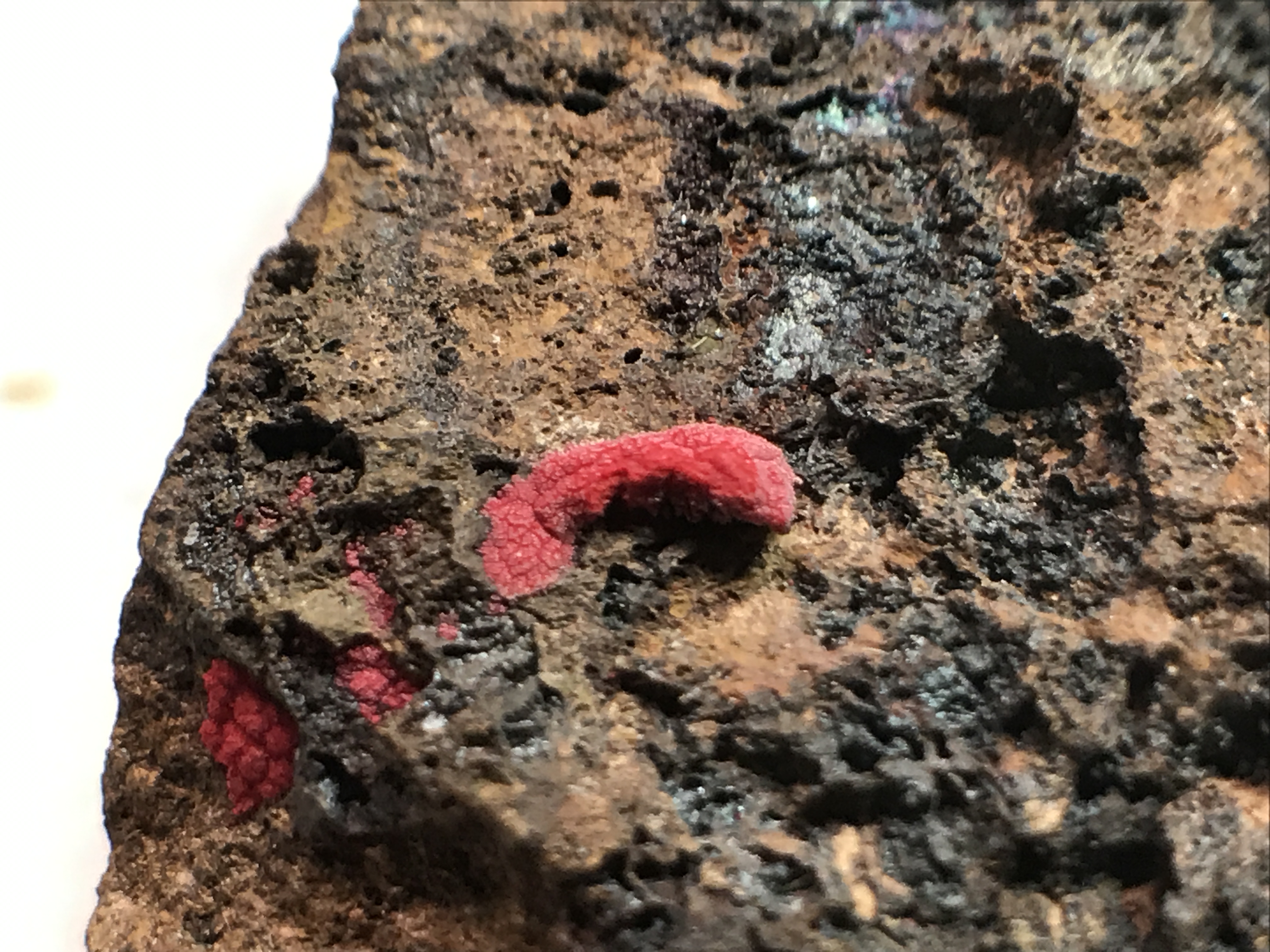 I put it in my upper jacket pocket where it would be safe and decided to call it a day. I needed a shower after digging in the dirt all day and I had quite a few minerals to inspect at my hotel. I usually stay at a casino just across the border in Nevada, so off I went down the mountain. I had a deposit to make in the casino slot machines!

Now you're probably wondering what is that hot pink mineral? It turns out one of the minerals I was looking for, carminite, does look like this. So until I get it under a microscope or I talked to one of my mentors about it I'm calling it carminite, a rare mineral!

It's really hard to write a post about an entire mine and all the minerals it contains. This was just a summary of sorts of a day out at the mine. I sourced some of the historical information from a geologist named Paul Adams whom is a member of the club I am part of, Mineralogical Society of Southern California. Paul gave a talk on the Mohawk mine last year in February and his presentation was intriguing and full of historical information. https://mineralsocal.org/2020-mssc-annual-banquet-speaker-is-paul-adams/

I hope I hooked you a little bit more into the world of gems and minerals. It really is a fascinating hobby. I get to go out and hunt those shiny things that the universe has provided for us. I'll be taking next week off as I am going on a serious hunting trip to find benitoite, one of the rarest gems in the world and the California state gemstone. So, until next time if I go out, your coming with me!

These stones are incredibly beautiful with strong colours! Amazing how people know where to find them inside the mountains.

Finding the stones is actually fairly easy, you just follow the vein until you hit an open area big enough for crystals to form. Keeping them intact is the challenge. Miners could care less about the crystals. They only care about the ore, grinding it up and pulling out the valuable minerals. That's good and bad though because often times it means they either leave the crystals in place or when they mine them they will toss them aside onto the tailings piles for us rockhounds to collect. I just wish I could get some bigger crystals!