The Great Conjunction of 2020 – A Meeting of the Gas Giants

As we look towards the west during twilight and into the early evening hours we see the planets Jupiter and Saturn edging ever closer together towards what has been dubbed the Great Conjunction of 2020. This rare celestial spectacle is something we all should take just a few minutes of our time to stop and have a look at. And the best part is it’s free, yes free, to those who simply look up.

A celestial conjunction is simply a close alignment of heavenly bodies - the moon with a planet, or two or more planets, or the moon or a planet with a bright star as viewed from our vantage place here on Earth. They are interesting because of their natural beauty, and while not rare in the general scheme of things they are something you don’t see every day. The rarity and interest in this particular conjunction, however, stems from the very close separation of Jupiter and Saturn and the interval between conjunctions of such close separation.

It is the orbital period of the planets around the sun that determines the interval between conjunctions. Jupiter, the fifth planet from the sun, takes about 11.9 Earth years to complete one orbit while Saturn, the sixth planet, takes a much more leisurely 29.5 years. As Jupiter is the closer to the sun, it moves along quicker than does Saturn and it therefore catches up to its outer neighbour every 19.6 years. It is at those times these planets will both be on the same side of the sun.

Just how close these two giant planets will appear in our sky is dependent upon the relative positions of the earth in its orbit around the sun and the location of Jupiter and Saturn in their respective orbits.

During 2020 both Jupiter and Saturn have been on the same side of the sun and as an added bonus both reached opposition within a week or so of each other back in July. Opposition is the term for when a planet is in the opposite direction to the sun as seen from earth i.e. the earth is in the line between the sun and the planet.

Earlier this year in the lead-up to opposition, Jupiter and Saturn were an interesting sight in the predawn March skies and, as an added bonus, were joined by Mars and the elusive innermost planet Mercury, plus the crescent waning moon joined them on March 20 and 21 in a beautiful alignment of celestial bodies. 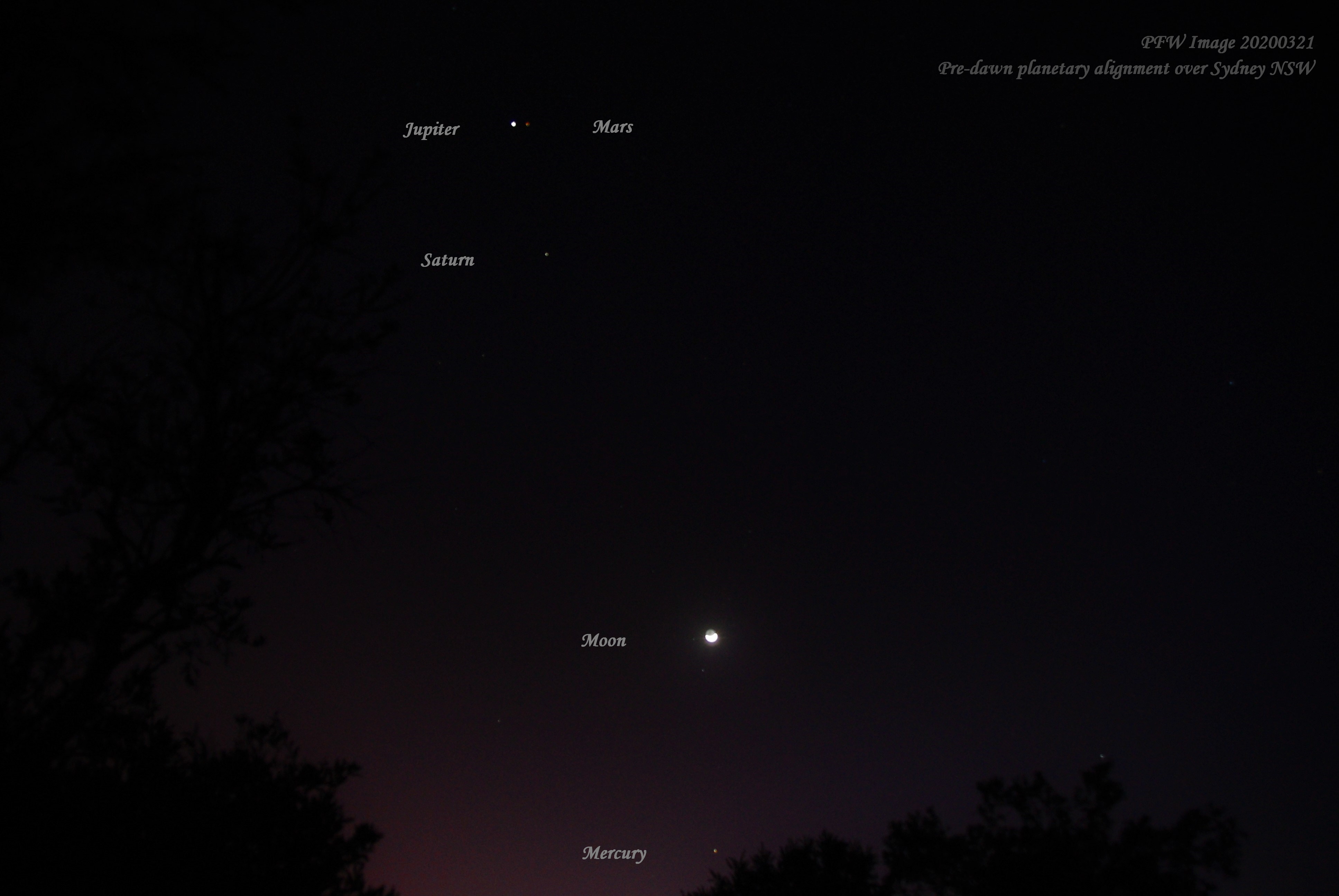 Predawn alignment of planets on the morning of 21 March 2020 over Sydney, Australia. An unguided exposure near the onset of morning twilight just as the sky was beginning to brighten. At top is a conjunction of the planets Jupiter and Mars. Below them is Saturn, the waning crescent moon and close to the horizon is the elusive planet Mercury.

But it is Jupiter and Saturn that are now demanding our attention as they gradually edge closer together and towards their least separation on December 21, 2020. But don’t wait until then to check them out! Take the opportunity on each clear evening starting from now to fully appreciate their slow movement from day to day as they gradually come closer together, remembering that for most of us there is no guarantee that the sky will be clear on any given night.

At closest separation on December 21 the two planets will be just 6 arc minutes apart, about one fifth the diameter of the moon (31 arc minutes) as seen with the unaided eye. The eye will generally separate two objects down to near 1 arc minute, meaning this conjunction will be comfortably viewed with the unaided eye. Binoculars or a telescope are not necessary but they will certainly add a different perspective to the view.

Facing towards the south west where the sun has set, the best time to view the changing aspects of this conjunction will be as the sky becomes dark. There will, however, be a trade-off between darkness and the elevation of Jupiter and Saturn above the horizon and perhaps the best time to view the conjunction will be around 1 hour to 90 minutes after sunset as the sky begins to darken, but be prepared and flexible according to your local conditions.

The orbit of our planet Earth is much closer to the sun and therefore moves much quicker along its path. We caught up to both Jupiter and Saturn bringing them into opposition back in July and since then we have left them behind and in doing so we now see them on the far side of the sun, getting close to at their furthest distance from us and at the opposite side of the solar system. The planets will set about 2 hours after sunset but as we have long twilights in summer, those of us Down Under will need to wait an hour or so for the sky to become sufficiently dark to better see the Jupiter and Saturn. Diagram showing the alignment and relative positions of Jupiter and Saturn on the far side of the sun as seen from our Earth during the Great Conjunction of December 2020. Diagram courtesy of www.timeanddate.com

Also bear in mind that a reasonably unobscured western aspect will be necessary to clearly see the conjunction. If there is a tree or neighbouring building (or worse still, a street light) blocking your view, just take a short walk to a nearby park or another suitable location. Be prepared to be mobile so as to not miss this rare event.

As an added bonus, a thin crescent moon with earth shine will be in close proximity to Jupiter and Saturn on the evenings of 17 and 18 December and this will add something special just a few days before the closest separation of the planets. For my money, these are the pic of the days when we want the weather and clear skies to cooperate!

If we do miss this event or the weather does not cooperate, the next opportunity to see another conjunction of Jupiter and Saturn in about 20 years but it will not be until 2080 when these planets are as close together as they are at this event. The previous very close conjunction was way back in 1623 but during that event the planets were a mere 13 or so degrees from the sun so it is unlikely too many people, if anyone, actually saw it! It would therefore be the 1226 conjunction that people last saw these planets this close together and at that time not too many would have travelled very far to view it for fear of falling off the edge of the then flat earth!

@forexbrokr sent me here. As a long time lover of astronomy, I love seeing this type of posts. I used to be that kid observing the sky with a star map in hand and I only had binoculars at the time. There were also mosquitoes. But I loved the experience.

I like using https://www.theplanetstoday.com to get a live view of the solar system :-)

Well, seems I was that other kid with Norton’s Star Atlas in hand and a pair of binoculars (actually, my grandfather’s binoculars that I had borrowed). And I am still on the summer menu for mosquitoes through what has been a life-long love of looking at the sky, both night and day.

Let’s hope the weather cooperates for the most part through to the upcoming closest approach on December 21 and the first few days thereafter.

Glad you enjoyed the post and I am sure there will be some interesting images showing different aspects of what is sure to be a beautiful conjunction.

What makes things even more fun is that all planets will be confined to one half of the solar system and we are seeing all this a week after an eclipse. Planets are busy just like what 2020 has been. Even cryptocurrency are seeing a new resurgence.