Nathenising Stem Part 1: Waves, Sound and the Beauty of Analogue

I've been having a trawl through @stemgeeks recently and I can thoroughly recommend it if you're bored of holiday snaps and crypto discussions. Almost every post on the feed is in-depth and educational. Sources are quoted and it's all of a very high standard.

One article, in particular, caught my attention today, this one, entitled Signal Processing: Analog-to-Digital Conversion. I read it in full as it's actually something I know a little about and it was like everything else I read here. Precise, well presented and referenced but yet, it saddened me a little that again, like many works presented to this community, it misses out on any practical applications and to be honest, if I didn't know better, and was just learning, raised as many questions as it answered. I know that enquiring minds will always ask "why?" but it would be nice if some of the authors here could pre-empt that in some way.

The other thing I'd love to see are some less cerebral articles, something that the layman could understand and enjoy. In the maths field, (and despite that fact he calls it 'math' and not 'maths'!) @dkmathstats is my favourite author. They layout a wide range of subject matter at a number of levels, always well worth a look but again, I'd love to see more practicalities and real-world examples.

I'm going to attempt to Nathenise a bit of science and maths and hopefully bring it to a wider audience whilst still retaining accuracy but trying hard to make it accessible if that makes sense, and I thought I'd start with a subject that will eventually lead all the way up to the level of @juecoree's article on analogue to digital conversions but by starting to today with the first principals of sound and building up and out with a series of posts that will create a broad knowledge base with interlinked articles. That's the theory anyway. So let me make a start with......

Waves, Sound and the Beauty of Analogue

Standing by the ocean, you'll notice a constant movement of the water. Ripples and waves, constant changes in the surface, infinitely varied patterns of height and intensity. It's mesmerising and practically unpredictable. These are waves, and they are analogue, and analogue basically means 'continuous'.

Sound is created by the movement of air and again, we call them waves as, like the water, change in intensity and strength and more importantly, due to our amazing bodies, become the sounds that we hear.

So what is Speech?

The sounds that humans call speech is created by a combination of muscles (the diaphragm) controlling the intensity of air that we push out through our mouths after passing through our voice box, which is nothing more than strands of elasticated skin and muscle which vibrate when the air passes over them and finally, through our mouth, and by using our tongue, lips and teeth to 'shape' the passing air into waves, it becomes sound, usually in the form of speech. 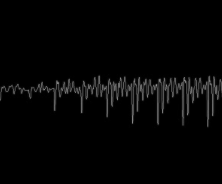 This is me making a noise and getting louder. The App is a very simple App called 'Sound Wave' rather unsurprisingly!

For this post, the mechanics are not important as we are mainly looking at the shape of the air and the waves which are created but the sound is beautiful and pure and is, of course, analogue!

The waves travel through the air but the air has resistance so as the waves travel, they disperse and become weaker and weaker until they disappear completely. Shout as loudly as you can and the waves will start out strongly but will still eventually weaken. It's not just that air that sound waves can travel through though, they can actually pass through any medium to a lesser or greater extent. Close the doors and windows tightly at home and you'll still hear the sirens of a passing emergency vehicle.

HOMEWORK: How do we hear sounds through seemingly solid objects such as glass and wood?

If we use this analogy back at the ocean, consider dropping a small pebble into the water. It will create a small wave which will also weaken until the water becomes smooth again. Drop in a large rock, and the wave will start stronger and travel further but again, it will eventually disappear.

So far, so good. Now you have the idea of waves fixed in your minds and we will step things up a little by starting with a simpler picture of a sound wave! So the first picture of the waves created by me speaking was incredibly complex so this diagram I drew simplifies things down to its basic form and labels some of the parts of the wave.

The vertical line, or axis measures the pressure of air as the wave pushes through it. Either the wave is making the air around it more dense or less dense. We call this compression (a term most people will have heard of) and rarefaction, a word you don't hear every day!

The horizontal line, or axis we can use to measure the wave either by time or distance depending on the application.

Amplitude is simply a measurement of the strength of the wave and how much it changes the density of the air and is measured in Decibels (dB). It defines how 'loud' a sound is, but we will come back and discuss that in further detail in a later post.

The wavelength is simply measuring one whole wave or 'cycle' and we use metres as a standard unit of length. Frequency basically measures the speed of the wave and the units are hertz (Hz). If we say a wave has a frequency of 1Hz, it means each cycle takes one second, cycles per second.

Going back to the human voice....

..... the range of frequencies we produce range between 20Hz (20 cycles or waves every second) and around 8KHz, 8000 cycles per second! The male, female and children's voices all create different frequencies of sound. This wide spectrum of frequencies is what makes speech intelligible and what we hear as 'pitch'

For in-depth detail on the human voice and its frequency ranges and effects, I'd seriously recommend this article

Hopefully, looking again at the diagram, you can now understand what something means to be 'analogue', remember we said it meant 'continuous change' and as you can see from the wave, it never stays still and the values and constantly changing.

Wait. So we know how we speak, but how do we hear?

Hearing is basically the reverse procedure of speaking. The sound waves create different pressures of air in our ears which vibrates some tiny bones, which causes a liquid in our cochlea to vibrate which in turn bends some tiny hairs that allow chemicals to enter the chamber and this chemical reaction causes tiny electrical signals to be created which then travel to the brain to be interpreted. 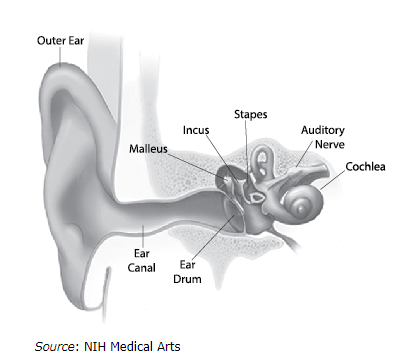 We now know what analogue means, the basics behind how sound is created and most importantly we have learned a little about waves, those beautiful curvy, wiggly things that transmit data, in this case sound, from one person to another, and they are beautiful. Not just to look at, but because of their purity. When two people speak face to face, the sound you hear is an almost perfect representation of the originating sound. That's why records are better than any digital media, they reproduce a more accurate representation of the original sound.

To screw all this beauty up takes technology, and it can't all be blamed on digital technology. Next time, I will give you a simple guide to telephony and how even old school analogue telephony is a huge sound compromise!