Have scientists just found proof of life on Mars?

Popular Mechanics magazine has just published an article about NASA photos from the Mars Rovers and orbiting satellite cameras showing what looks like miniature mushrooms growing on the surface of Mars. A paper has just been released written by an international team of scientists regarding this possible photographic evidence of these fungus-like entities growing in the harsh conditions of Mars. 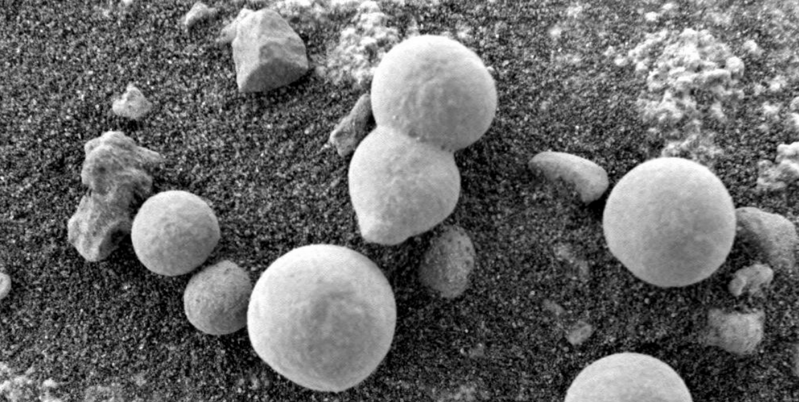 I always wondered how religionists would react if and when scientists eventually found life on other planets. How would it oblige Christianity, for example, to rewrite their philosophy or doctrine regarding the Creation? There has never been any acceptance of the possibility of life on other planets in the western religious doctrines. In the ancient texts of the east however, there is plenty of reference to life on other planets, so it would only confirm what is already accepted in the Sanskrit Vedas of ancient India.

I doubt that NASA would make these photos up or even make up the fact that they are even on Mars, so setting that conspiracy theory aside, let’s just say that these photos are legitimate. Scientists are still only speculating about what the tiny white items actually are, so we don’t know for sure if they are mushrooms or not just yet. Some specimens would need to be brought back from Mars for us to really confirm it. But from their behavior, the photos appear to suggest that puffball mushrooms are growing in size and multiplying in the tracks of the Mars Rover, as well as actually on the Rovers themselves.

Over a period of three days, photos were taken that show these white items, no bigger than 3-8mm in size, emerging out of the sand on the surface of Mars. These items appear to grow, change shape and disappear over the observed period of time. And they perfectly resemble a terrestrial fungi. As a result the speculation is rampant at present regarding the possible discovery of actual life on Mars. The implications are positive for future Mars settlers, who might be able to use them as food.

Such “extremophiles” living on another planet might oblige humanity to rewrite their philosophy of life, the universe and everything. It seems logically natural to find this kind of life form on another planet, and it was only a matter of time before we stumbled across them. Actually the Mars Rovers have been up there for a few years now and have been speculating about findings for a while, so this is not totally new.

Next we would simply need to find proof of water and then we would be sure there was some other life form present somewhere on the extraterrestrial planet. Curiously the ancient Sanskrit texts of India, which are said to go back thousands of years, mention way more than mere mushrooms on other planets. They talk about people and civilizations existing there, much like on earth but way better. To me the vastness of space and the multiple solar systems and planets certainly imply that there is plenty more life on other planets. Why would all this massive space only produce life on one little speck and not any other?

If we ever find intelligent life and actual civilization on another planet, we would certainly need to rewrite the gospels and doctrines of some of the world religions. The concepts of God, and all the rest would need to be updated. Did the same God create these other species too? Obviously life originates from one source, regardless of where in the universe it is. Though what may be philosophically obvious to me might be doctrinally controversial to someone else.

And now with all the recent rumor of disclosure, where the US government starts revealing their UFO files and declassifying documents, we may have even more real evidence of intelligent ETs, certainly more than some fungi or mushrooms. All this is still speculation of course, and for some reason there has yet to be any full disclosure or legitimate revelation regarding ET contact. For some reason humanity is being kept in the dark regarding any UFO phenomena. The day that disclosure occurs and we see that ETs are real will be the start of a new chapter in humanity’s history, like a Renaissance of sorts.

Until then we can only speculate and look at some photos from Mars of little mushrooms or fungus or whatever it is. Check out the references listed below if you want to find out more of the details and let us know in the comments what your opinion is on the subject.

Imagine what it could lead to if that were plant life perhaps we could use that to find ways to fertilise desert and farm in harsh conditions! I’m jusy speculating here of what could be extracted from this possibility

Fully, the space race will determine the future leaders of the planet. To the moon...of Mars.

I often wonder if sometime in the future, when humanity has established permanent settlements beyond Earth's protective atmosphere (and ionosphere, etc) and is constantly made aware of, just how intensely, ruthlessly hostile "space" is to the human organism, if then there would be some mass political movement to conserve the Earth, turning it into like a sanctuary for the solar system

Because it's just so much damn easier to be alive on Earth. The environment doesn't have to be engineered, manufactured and maintained around-the-clock to support life...

Well said, we already have a perfect place to live - our home planet. Let's preserve it for posterity.

Yeah! The convergence of these different technologies is already underway

Given that the moon landing was a joke, and the photos of mars are faker than fuck...greenland anyone?...it boggles my mind that people fall for this moronic scam every time

Refreshing take there lol, yes NASA are suspect in their revelations so take it all with a pinch of salt and mushroom.

I would love to see one of those mushrooms in detail - if they are mushrooms. They might be something totally different from any form of life we have ever seen!

Where does the Bible say that there isn't life elsewhere? It just doesn't talk about it? Personally I never saw the conflict.

Well said, they could be something unique, and indeed there may be no conflict in theological circles regarding life on Mars.

Would be cool to get a probe up there with a time-lapse camera so we could watch these potential little puffballs doing their thing! :D

That's basically what they have- but can't tell if it's sand forming them, or if they are alive.

I see, we need to zoom in a bit perhaps
Get some samples...

Samples would be great! I wonder if they are able to analyze them with the rover?

Yeah! I'm pretty sure some of them have collected soil samples before. They'd be limited in what analyses could be done in situ though

It seems like life is possible on Mars but it will be hot! I don't know why people are seeking life on other planets why Not making Earth back Earth. Nice post and I also like to explore universe! And indeed if mushrooms are grown there. Life must be possible out there! But the fact is if they really are mushrooms!

Yes the climate will be extreme. I wonder if they are mushrooms. There is no way to tell yet for sure.

Next we would simply need to find proof of water

If we found Fungi-like living things, then next thing might proof of water on Mars. However, we still need to think twice whether it's a suitable place for human beings or not :I

The fungi could feed the colonizers or transformed somehow. I wonder if it will be manned in our lifetime? I guess so.

Congratulations @julianhorack! You have completed the following achievement on the Hive blockchain and have been rewarded with new badge(s) :

Thanks for sharing, this is fascinating