juecoree in STEMGeeks • 9 months ago (edited)

The solution provided in the text are for indirect control of single-acting and double-acting cylinder. In FluidSim, the solution is evaluated if it yields the correct response. In the next section, the pneumatic circuit and simulation result is presented. 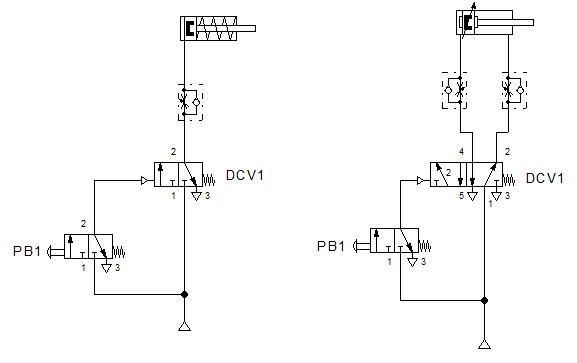 For the single-acting cylinder, a pneumatically actuated 3/2 way directional valve was used, as shown in Figure 1. For the double-acting cylinder, we used a pneumatically actuated 5/2 way valve to do the indirect actuation of the cylinder. Hence we assumed that the cylinder is of large capacity, the actuation can not be done by a single push button 3/2 way directional valve. 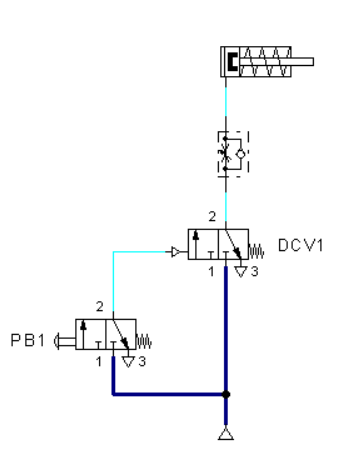 When PB1 is pressed as shown in Figure 2, the normally closed 3/2 way DCV with push button shifted to open position that allows air pressure to pass through it. The air flows at the actuations port of DCV1 so that DCV1 opens and allows air to flow. In this case, the air builds up at the cylinder causing the cylinder to extend. Eventually, when PB1 is released, the spring return in DCV1 automatically shifts the control valve to initial state causing the air flow to be interrupted. Hence there are no air intake in the cylinder, the single-acting cylinder returns to retracted position. 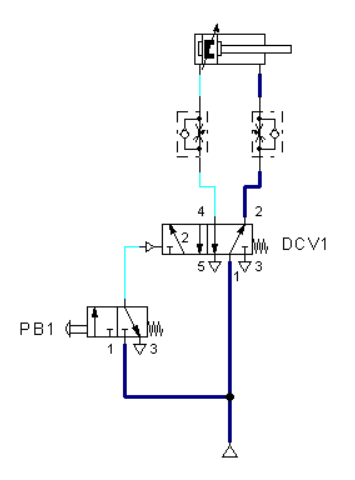 In Figure 5, Port 2 of DCV1 has air pressure to sustain the retracted position of the double-acting cylinder. This happen when PB1 is released or not pressed. When PB1 is pressed as shown in Figure 4, the flow of air in the 5/2 way directional valve (DCV1) shifted from port 2 to port 4. This allows air to build up at the extending port of the cylinder. This is made possible when the PB1 is pressed and it shifted to open position at which the air passes through it. The one-way flow control valve in the circuit is provided to ensure that the retraction or extension of the cylinder is paced at 50% of its normal speed or response.

Furthermore, the circuit is called a memory circuit because it uses a 5/2 way double pilot memory valve. 5/2 way valve can remember the last signal applied in terms of the position of the spool in the absence of reset springs, thus memorizing or storing the pneumatic signal. Double piloted 4/2 way valve also can be used as memory valve.

This circuit is suited for large single cylinder sand cylinders operating at high speeds. The final control valve is actuated by normally closed 3/2 way directional valve with push button which handle large quantity of air. When the PB1 is pressed, 3/2 way DCV with push button shifted from normally closed state to an open state and actuates the final control element (DCv1) which is in between the cylinder and PB1. When the push button is released, the actuation at DCV1 is released causing the DCV1 to return to its initial state. The signal pressure required can be around 1-1.5 bar. The working pressure passing through the final control valve depends on the force requirement which will be around 4-6 bar. Indirect control as permits processing of input signals. Single pilot operated valves are rarely used in applications where the piston has to retract immediately on taking out the set pilot signal.