This Monday, September 26, NASA achieved a milestone in its space career by intentionally crashing a spacecraft into an asteroid as part of the first-of-its-kind DARTA mission to determine how to deflect rocks in space that pose a danger to Earth. Representation of DART in the Didymos system. Source: Wikipedia.org.

Let's take a brief recap, the DART (Double Asteroid Redirection Test) mission is a NASA mission whose objective is to test a new defense system against objects approaching the earth. This mission was launched in November 2021, and since then, the spacecraft has been traveling in space with the aim of reaching a double asteroid system, where a small moon asteroid called Dimorphos orbits around a larger asteroid called Didymos. The objective of the mission was precisely to crash a spacecraft into the small asteroid Dimorphos to determine whether the kinetic energy of the impact is capable of modifying the trajectory of an asteroid on a collision course with the Earth.

The DART spacecraft has a mass of 610 kilograms and is 100 times smaller than its target, which has a diameter of 160 meters, but its impact at 6.6 km/s is expected to produce a small velocity change in Dimorphos, and over time, that small velocity change is expected to transform into a change in its trajectory. It should be noted that neither the Didymos asteroid nor its satellite Dimorphos represent a danger to the Earth, and are only a test target. Size of DART and the two Didymos asteroids. Source: Wikipedia.org.

This collision, which could be compared to the crash of a bus into the Great Pyramid of Giza, will not have enough energy to do much damage to the asteroid, it will barely leave a small crater, so don't expect to see a Hollywood type mission where Ben Affleck destroys an asteroid with a big explosion; but the energy of the impact is expected to be enough to change the speed of Dimorphos by 1%, which may not seem like much, but it is enough to change its orbital period, and over the years, a change in its trajectory will be noticed. And what will we be able to see?

Although the spacecraft does not have any scientific payload, it is equipped with a telescopic camera called DRACO (Didymos Reconnaissance and Asteroid Camera for Optical navigation), by means of which the spacecraft will share its vision of the asteroid as well as serve for its navigation, since it will allow it to recognize the object against which it must collide.

DRACO is a high-resolution camera with which we will be able to see snapshots of the spacecraft's approach to the asteroid at a rate of one frame per second, so it almost looks like a video. These images were shared today by NASA in real time, and we had the great opportunity to witness this historic impact through various media, such as the official twitter of the space agency. 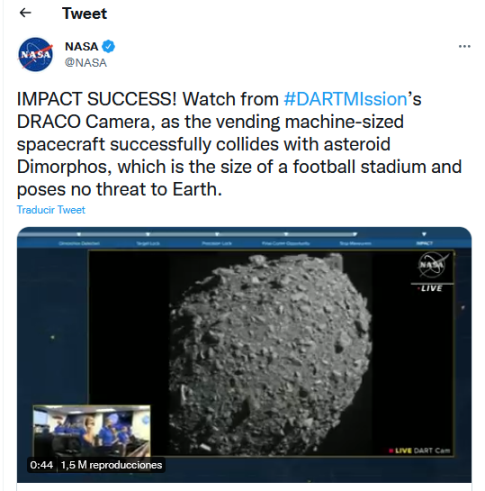 On the other hand, the DART spacecraft will be seen by another observer of the mission, a cubic satellite the size of a briefcase, called LICIACube, accompanied the spacecraft on its journey but separated from it on September 11 and positioned itself behind the spacecraft to record the event from a safe distance. And after the impact, LICIACube will travel alongside Dimorphos to photograph the impact site and the crater left behind, although these images will not be available immediately and we will have to wait a few days to see them. Illustration of the DART and LICIACube approaching Dimorphos. Source: Wikipedia.org

Other space reporters will also give us details of this mission, and the James Webb and Hubble telescopes will also observe the impact. But ultimately it will be the telescopes on the ground that will be responsible for determining whether the mission was successful in deflecting the asteroid, and that will take a little more time.

Besides the visual spectacle, this mission is definitely of great importance, since the size of Dimorphos makes it a good example of an asteroid that could threaten the earth, and that is why it was chosen for the mission, which will allow scientists to analyze how an asteroid of that size and mass behaves in the face of this collision, which is crucial to determine if a thrust can modify the trajectory of objects approaching the earth.

Well friends, let's hope that the DART data will contribute to build a planetary defense system, which as we see, do not have immediate or explosive results as in Hollywood movies.

Good to know that it was a success the experiment!
!1UP