We are all aware of the accelerated pace of global warming due to the increase in the concentration of greenhouse gases in the atmosphere derived from the burning of fossil fuels, which has had the environmental consequences that we already know. That is why many countries and organizations have set a global goal of carbon neutrality by 2050, and although renewable energies are necessary to achieve this goal, we still need to prevent tons of carbon dioxide from reaching the atmosphere during the transition to a more sustainable energy model. In that sense, carbon sequestration is fundamental to support such a transition and thanks to a very cheap polymer called melamine, a group of chemists have developed a cheap way to capture carbon dioxide from the generation source itself. Carbon dioxide capture or sequestration consists of the long-term removal of quantities of carbon dioxide from the atmosphere, something that can be done through biological, chemical or physical processes; this is why it emerges as a technique that could be used to contribute to achieving the goal of a zero emissions balance, together with a progressive reduction in the use of fossil fuels; however, there are many challenges that this technique still has to face, especially with regard to costs and energy consumption. But with the latter in mind, great efforts have been made to develop new materials that reduce both costs and energy consumption, making them more environmentally friendly and more efficient.

In this area of development, much research has been done on aqueous polyamines, due to their ease of spontaneous CO2 fixation and their low cost; however, they have presented important disadvantages, such as decomposition into volatile amines and the amount of energy required to regenerate the solvent, in addition to other problems that have arisen from their use, such as corrosion of lines and equipment, and the generation of emissions that are hazardous to human health.

Among the proposals made to solve these limitations of polyamines and improve their applicability in carbon capture is the use of amine-functionalized adsorbents instead of using aqueous polyamines, since this would avoid the generation of hazardous and corrosive substances without affecting the selectivity of amines for CO2.

But it is difficult to establish a reaction mechanism between amines and CO2, since the different structures of primary, secondary and tertiary amines, as well as polyamides, provide equally different mechanisms, but in general it can be said that primary and secondary amines give rise to the formation of a carbamate:

In the case of tertiary amines the carbamates produced are not very stable and in the reaction the bicarbonate anion is produced. And as far as polyamides are concerned, there are a greater number of mechanisms by which the reaction can take place.

Now, although the functionalization of amines with metal-organic frameworks have demonstrated high adsorption capacity, there is great interest in developing porous adsorbents based on polymers, since they can be synthesized without the presence of metals, which makes them more economical and sustainable, characteristics that are highly desired for mass production.

That is why a team of researchers mainly from Berkeley and Stanford Universities worked to produce a solid-state melamine nanoporous network (MNNs), with added polyamines and stabilized with cyanuric acid, to achieve more efficient, high-capacity and scalable CO2 capture.

This new material is very easy to produce, as it basically requires melamine powder, an aminoresin that is the main component of the adhesive used to make chipboard and formica, which is widely available on the market, and is also very cheap, while formaldehyde and cyanuric acid are also affordable chemicals, the latter even being added as a stabilizer for chlorine in swimming pools. 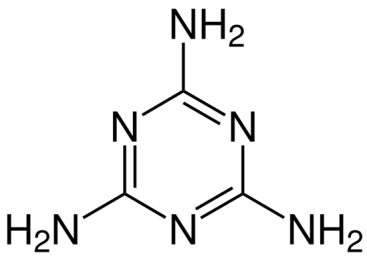 By treating melamine powder with formaldehyde they were able to create nanoscale pores that allowed the melamine to adsorb some CO2, but by adding diethylenetriamine (DETA), another amine-containing substance, they were able to improve adsorption on this material. Subsequently, it was found that adding cyanuric acid during the polymerization reaction greatly increased pore size and CO2 adsorption, finding that a simulated combustion mixture was adsorbed almost completely in a short time. The adsorption isotherms were measured at 298K with CO2 as carrier gas, finding that the coordination of polyamine and cyanuric acid provides the porous network with a high adsorption capacity, registering 1.82 millimoles per gram at 1 bar, in an adsorption time of less than 1 minute, which represents an extraordinary stability to flue gas cycling. 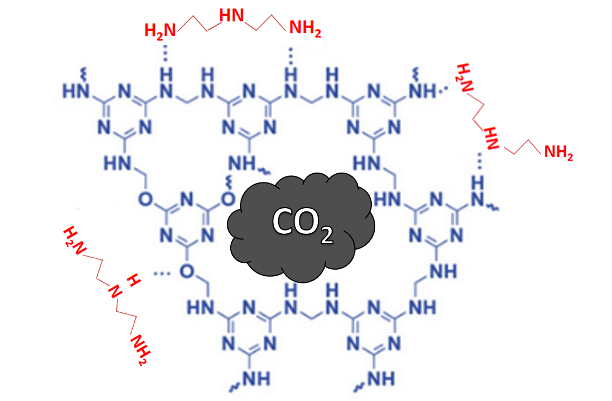 The MNNs would act as a net capturing CO2. Source: Powerpoint image.

On the other hand, the porous melamine grid modified with DETA and cyanuric acid achieved CO2 capture capture at 40 °C, and achieved its release from the grid at 80 °C, considerably low temperatures that represent considerable lower energy consumption compared to other amine systems where the mixture must be heated to approximately 150 °C to release the CO2 and regenerate the adsorbent.

Well friends, let's hope you enjoyed reading about this new, economical and sustainable material that could be used for carbon sequestration at the generation site. See you next time!

Ok I understood the chemistry but how it is going be available ? A device?
!1UP

Yes, although it is a basic research and scale tests should be done now, as it is a CO2 capture method at the site of generation it is most likely to be applied by some device, like the catalytic converters in the exhaust of the vehicles.

This seems to be quite promising. It is clear much more efforts must be made on similar researches, as carbon sequestration is definitely needed to reduce its concentration in the atmosphere. I didn't know how melamine could help. Therefore, thanks a bunch for sharing this exciting news!

Hello friend, thanks to you for stopping by to read. Definitely more innovations are needed in this field, contributing to the removal of carbon from the atmosphere to slow down global warming. Regards!

You are welcome! It is impossible not to stop by to educate ourselves on this very important topic ^^