The icy giants orbiting the periphery of our solar system, as the planets Uranus and Neptune are known since they are mainly made up of ice and gas, have very extreme conditions inside them, so much so that some researchers have the theory that it even rains diamonds inside them. And to test this hypothesis, an international group of researchers conducted an interesting experiment, they fired a laser on a thin plastic film, and the strong flash of the laser created a shock wave so extreme that it produced tiny diamonds. 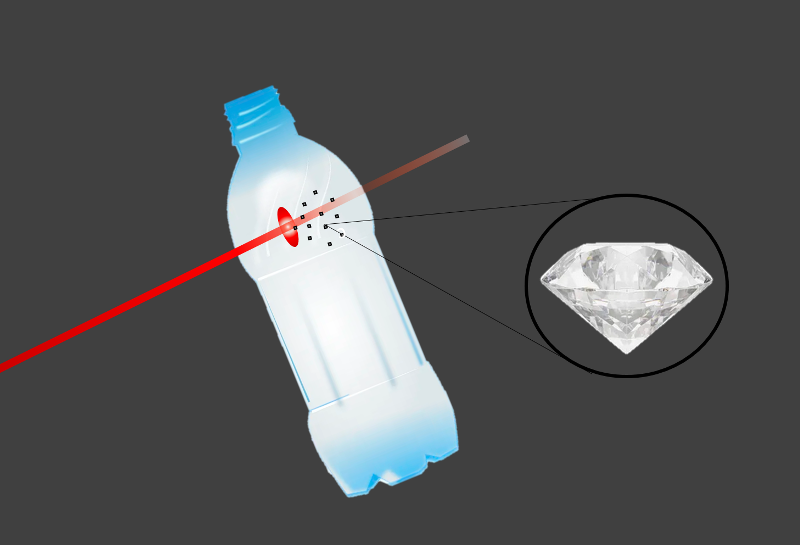 The flash of a powerful laser on a PET film produced nanodiamonds. Source: Image created in powerpoint, the images of the bottle and the diamond are in the public domain.

Uranus and Neptune have a very similar composition, although different from the other gas giants, the atmosphere of these two planets contains hydrogen, helium, traces of hydrocarbons, and a dense fluid mixture of water, methane and ammonia. And the extreme conditions of temperature and pressure in the interior of these celestial bodies, which are believed to be several thousand degrees Celsius and millions of times the atmospheric pressure of Earth, have led to believe that it is possible that these materials in their atmosphere carry out very peculiar chemical reactions and phase transitions, and among these it is believed that hydrocarbon dissociations take place that would lead to the formation of diamonds that precipitate into the rocky core.

Conditions such as those present in the deep atmosphere of these planets have been briefly simulated in the laboratory, using the powerful flash of a laser that upon impacting the surface of a sample creates a shock wave so strong that for a few nanoseconds it can heat the surface to about 6000 K and compress the material with a pressure of hundreds of GPa.

Until now, diamond formation has only been simulated with pure C-H systems, using hydrocarbon sheets in these experiments. But it was necessary to consider the presence of water, and therefore oxygen, in the atmosphere of these planets, so this research team decided to evaluate C-H-O systems, seeking to obtain more realistic results, since Uranus and Neptune contain not only carbon and hydrogen in their atmosphere, but also oxygen, and used a single plastic sheet of polyethylene terephthalate (PET), (C10H8O4)n, in the laser shock experiments to simulate this mixture of elements.

As you may know, PET is one of the most commonly used plastics in everyday life, it is the material from which common plastic bottles are made, and when looking for a suitable material for the test sheet, the researchers realized that this polymer has the right carbon-hydrogen-oxygen ratio to simulate the internal composition of planets.

This team conducted the laser shock tests at the Linac Coherent Light Source (LCLS) facility, the first X-ray free electron laser (FEL) facility, which, through an accelerator, can provide laser-like radiation that is 10 billion times brighter and more powerful than any existing X-ray source.

On the other hand, they made use of a combination of two measurement methods, X-ray diffraction (XRD) for the purpose of identifying formed crystalline structures and identifying diamond formation, together with small angle X-ray scattering (SAXS), which is sensitive to samples on the order of 1 to 100 nm in size, to determine the size of the formed diamonds. This allowed probing the structure of dynamically compressed materials, thus mimicking the interior conditions of these planets. 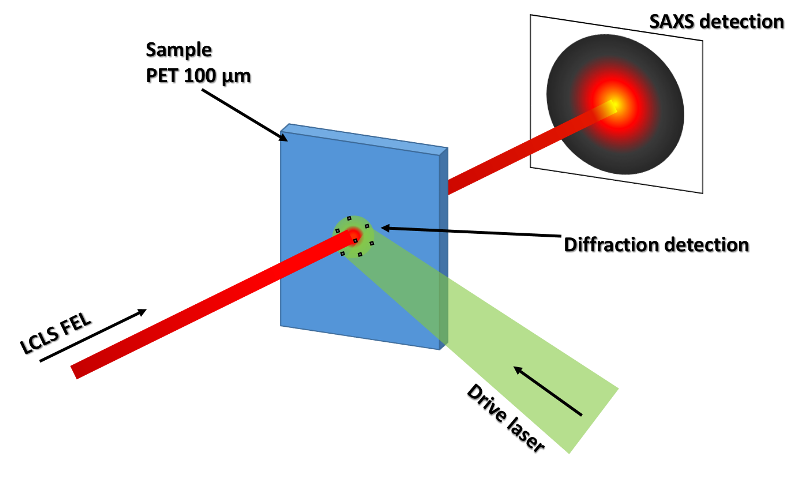 These observations are very important as they reinforce the assumption that diamonds can literally rain down on Uranus and Neptune; and in addition to this fundamental knowledge, they have provided a method for producing nanodiamonds, which are in great demand for producing abrasives, quantum sensors and as an alternative to nanomaterials in the medical field for transporting drugs and diagnostic tracers. This represents a cleaner method of production, as the industry standard has become the detonation of explosives in sealed oxygen-free chambers to produce a mixture of nanodiamonds.

Well friends, I hope you liked the information about this interesting way of producing nanodiamonds. See you next time!

I read once about that! Nice experiments to prove this interesting rain!
!1UP

One day, I hope humanity or their probes can reach out there and take a close look at what is happening on those planets.

It would be great to be able to gather first hand information, hopefully one day it will be possible.

Hi @bananzell, no doubt that the nanodiamond industry would have a novel manufacturing method, hopefully the method can be scalable to be applied on an industrial scale.