Some are amazed and others frightened when in the middle of a thunderstorm there is a powerful discharge of static electricity from a lightning bolt. From biology it is believed that lightning may have played an important role in the appearance of life on Earth, and may have induced in our primitive atmosphere the chemical reactions that formed the first molecules necessary for life, as has been demonstrated with different experiments. And now, thanks to a study we know that lightning and electrical discharges produced in clouds have the role of cleaning our atmosphere. When lightning illuminates our skies, the powerful discharge of electricity released not only produces light and heat, but also induces the breakdown of nitrogen and oxygen molecules, forming reactive molecules that are capable of breaking down methane and other greenhouse gases, helping our atmosphere to restore its equilibrium.

These reactive molecules are hydroxyl radicals (OH) and hydroperoxyl radicals (HO2), very powerful oxidizing molecules. And although it is known that during a lightning discharge, nitric oxide is produced which leads to the formation of oxidizing species in the atmosphere, such as ozone and the OH radicals themselves, through a series of chemical reactions.

It is known that the production of nitric oxide by lightning leads to the formation of important atmospheric oxidants, such as ozone and hydroxyl radicals (OH), through a series of chemical reactions; but a group of scientists demonstrated through a series of aerial measurements of OH and OH2 that lightning also produces these chemical species directly and in much larger quantities than those considered, according to their conclusions, the mechanism by which these species are produced could be responsible for up to one-sixth of the oxidizing capacity of the atmosphere. 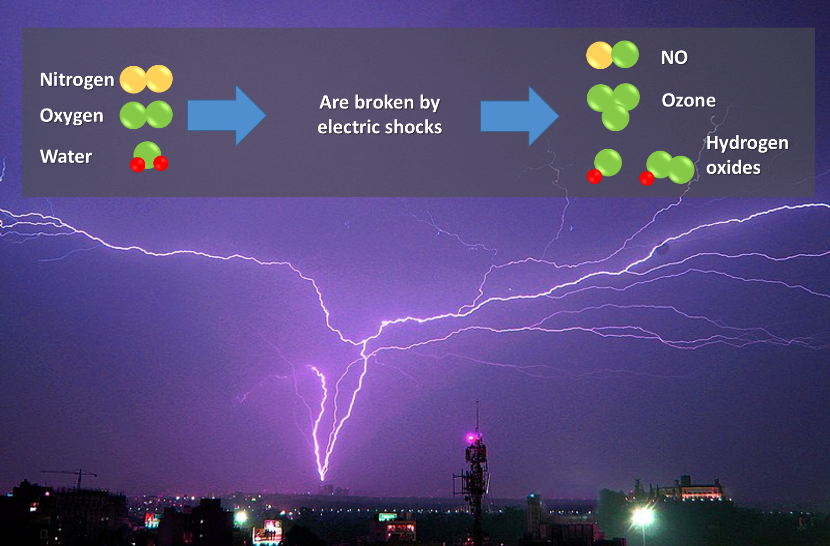 The data collected by this team of scientists were taken during a flight between Colorado and Oklahoma in 2012, using an instrument installed on the aircraft used to analyze deep convection and chemical changes in the atmosphere produced during a thunderstorm, and they flew during such conditions. At first the results did not match the expected measurements, recording huge signals from OH and HO2 radicals, but they considered that it might be noise in the instrument, so they archived those records for later analysis.

Although by then it was already known that lightning is capable of changing the water chemistry inside clouds, inducing the splitting of the water molecule and producing these radicals, the data taken did not seem to make sense because they did not fly between the clouds where the lightning was occurring, something that would have been very dangerous, yet they recorded high concentrations of these radicals. Almost a decade later these data were taken back for analysis, with the idea that such radical concentrations could be produced by electrical discharges in the laboratory, and a new study was carried out on the data set.

Thanks to the new study, the scientists were able to relate the enormous signals recorded by the instrument during a flight to measurements made from the ground, specifically linking such signals to visible lightning strikes ahead of the aircraft and to subvisible discharges in the electrified regions of the anvil, the upper part of the cloud extending outward into the wind. These scientists then published their results in the journal Science.

This shows that with a lightning discharge, even in the regions of the clouds where visible light is not observed but is electrified, significant amounts of hydroxyl (OH) and hydroperoxyl (HO2) radicals are produced, which remain inside the clouds and oxidize the surrounding atmosphere, helping to clean the air of greenhouse gases such as methane and nitrogen oxide. While the researchers admit that there is still much uncertainty, and that they must extend the study to apply these measurements to the rest of the planet, especially since most thunderstorms occur in the tropics, it is an important contribution as this newly detected phenomenon would have an important role in balancing our atmosphere, producing a significant amount of reactive molecules that help fight global warming.

Well friends, let's hope that the understanding of this phenomenon advances and allows us to see more than the destructive effect of lightning on the ground, but also its important contribution to the balance of our planet.

It is a strong and beautiful phenomenon! Thanks for bringing it
!1UP

It is undoubtedly one of the most beautiful phenomena, although dangerous.