Greatest Common Factor (GCF) Of Numbers With The Cake Method

dkmathstats in STEMGeeks • 11 months ago

Hi there. In this math education post, I cover the topic of greatest common factor of two or more numbers with the cake method. It is sometimes called the ladder method. What Is A Greatest Common Factor?

What is the greatest common factor for 9 and 15? The method shown above for obtaining the greatest common factor required listing factors. This method is simple to follow but it may not be the fastest. The above method could be slow or even difficult if the numbers become really large.

A good method for determining the greatest common factor between two or more numbers is the cake method. It is sometimes called the ladder method as well.

I use https://www.tutorialspoint.com/whiteboard.htm and screenshots for the images here.

With the cake method start with this setup (screenshot below). The two numbers are listed at the top with an L shape. 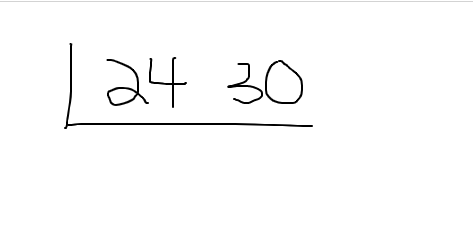 Determine a common factor that is in 24 and 30. It does not have to be a large number factor. You can do something as simple as 2 as both 24 and 30 are even. Write the 2 on the left side of the L shape.

There is a common factor greater than one between 12 and 15. That is 3. Write the 3 on the outside of this second layer. 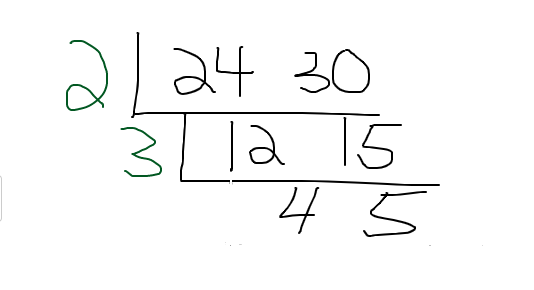 Find the greatest common factor (GCF) of 28 and 112. I display the full cake method screenshot for this example. For dealing with three numbers, the cake method is not that much different. There is just an extra number involved. Start with the setup as follows.

Determine a common factor between the three numbers. You do not have to select a large common factor. Choose something that is obvious for you. You can choose 3 but I chose 10 as each of three numbers are multiples of 10. There are some neat online tools and math games that relate to Greatest Common Factors. Here are a few that I have found on the internet.