Euclid's Algorithm For Finding The Greatest Common Factor Of 2 Numbers

dkmathstats in STEMGeeks • 2 years ago (edited)

Hi there. In this mathematics post, I cover Euclid's algorithm for finding the greatest common factor (gcf) between two numbers.

Euclid's algorithm falls under the number theory side of mathematics.

Quicklatex.com is used for math text and LaTeX rendering. When it comes to two numbers or even more, you can find common factors between them. Consider the numbers 12 and 21. Instead of going through the general case for Euclid's algorithm, I think it is better to show how this algorithm works with examples.

What is the greatest common factor between the numbers 20 and 64?

The larger of the two numbers is 64. This 64 would be on the left side of the equation. Express this larger number 64 as a multiple of the smaller number 20 plus a remainder.

For the next equation, the left side is 20 which was the smaller number. The right side uses the remainder 4 from the previous equation multiplied by a multiple plus a remainder.

Euclid's algorithm stops when the remainder is 0. The greatest common factor here is 4 for 20 and 64. I have included a screenshot below as a summary. (Mathisfun Whiteboard part of website is used) 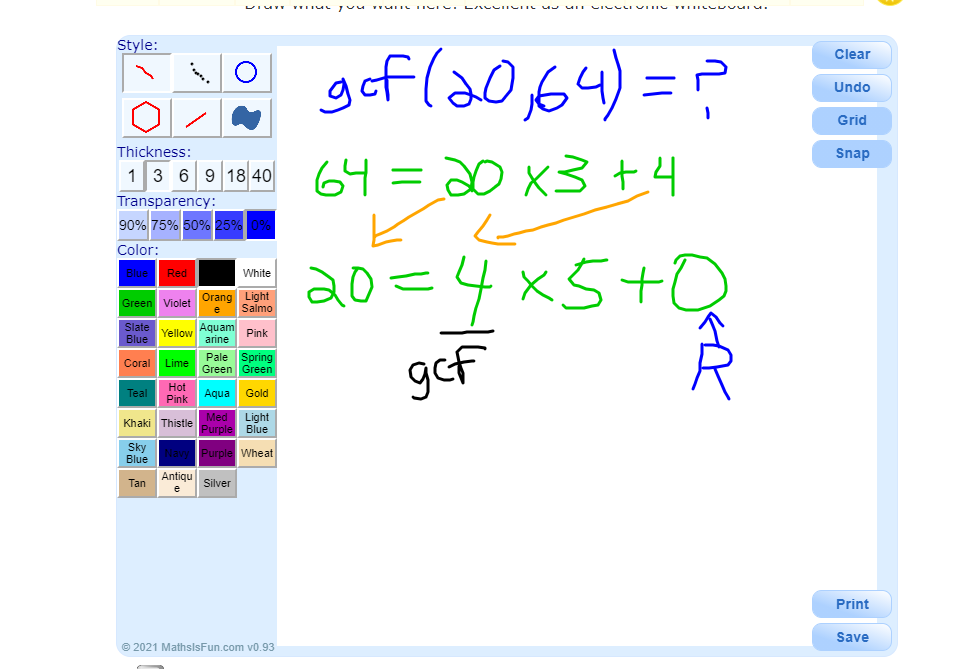 The first line for Euclid's algorithm would be 180 being equal to a multiple of 122 plus a remainder.

For those who want a more detailed and theoretical view of Euclid's algorithm, consider this page. I've never learned the name of this method and yet done this throughout school. lol

Maybe the teachers did not know the method. They just taught it.

Ha probably. I had a lot of younger teachers in my time through public school.

Your posts are really well constructed and laid out but may I make a suggestion please as most of your readership here are 'big children'. Firstly, could you give us a few real-world examples of why we might want to know the subject of a post and secondly, please post the answers to the solutions of the practice problems in your next post!

Best wishes and please don't take this comment as a criticism in any way.