dkmathstats in STEMGeeks • 9 months ago

Hi there. In this probability post, I will cover the concept of computing probabilities of two events. I cover the keyword and and independent events along with the keyword or and the union of events. The Keyword and & Independent Events

(I have an earlier post that covers the concept of independent events in probabilities in more detail here.)

When it comes to two or more events in probability the keyword and is similar as to English. In the probability setting, both conditions have to occur at the same time when given the scenario A and B.

Let's look at some examples.

You have ten marbles in a bag. Seven of the ten are red and the remaining three are blue. You pick out two marbles from the bag at random without putting any of the marbles back in the bag. What is the probability that the two marble picks will be both red?

In the first pick, you have a 7 out of 10 chance of picking a red at random.

With the second pick, the number of marbles left in the bag is 9. In addition, there are now 6 red marbles and 3 blue marbles. The probability of picking a second red given that the first pick was a red marble is 6 out of 9.

The probability that the two marble picks are both red is the product of the two fractions.

What is the probability that both ten sided dice have a zero on top?

This question is not too difficult as the two dice are independent from each other when they are rolled. The probability of both dice being zeroes is the product of the individual probabilities.

Consider a fair two sided coin with heads and tails along with a spinner with the numbers from 1 to 5. Max flips a coin once and spins the spinner once.

What is the probability of Max flipping a heads and landing an odd number from the spinner?

The probability of flipping a heads is one half. For the spinner, there are three odd numbers out of five from the numbers 1 to 5.

The concept of independence and the keyword and can be extended to more than two probability events.

Refer to the above spinner with the numbers 1 to 5 again. What is the probability of spinning all ones in three spins? The Keyword or & Union of Events

In the English language the word or means you can only choose one of two choices. When it comes to probability the word or is different. This does confuses newcomers in this topic.

With the A or B or the

The explanation from above is better explained with the use of a formula and a Venn diagram for two sets. 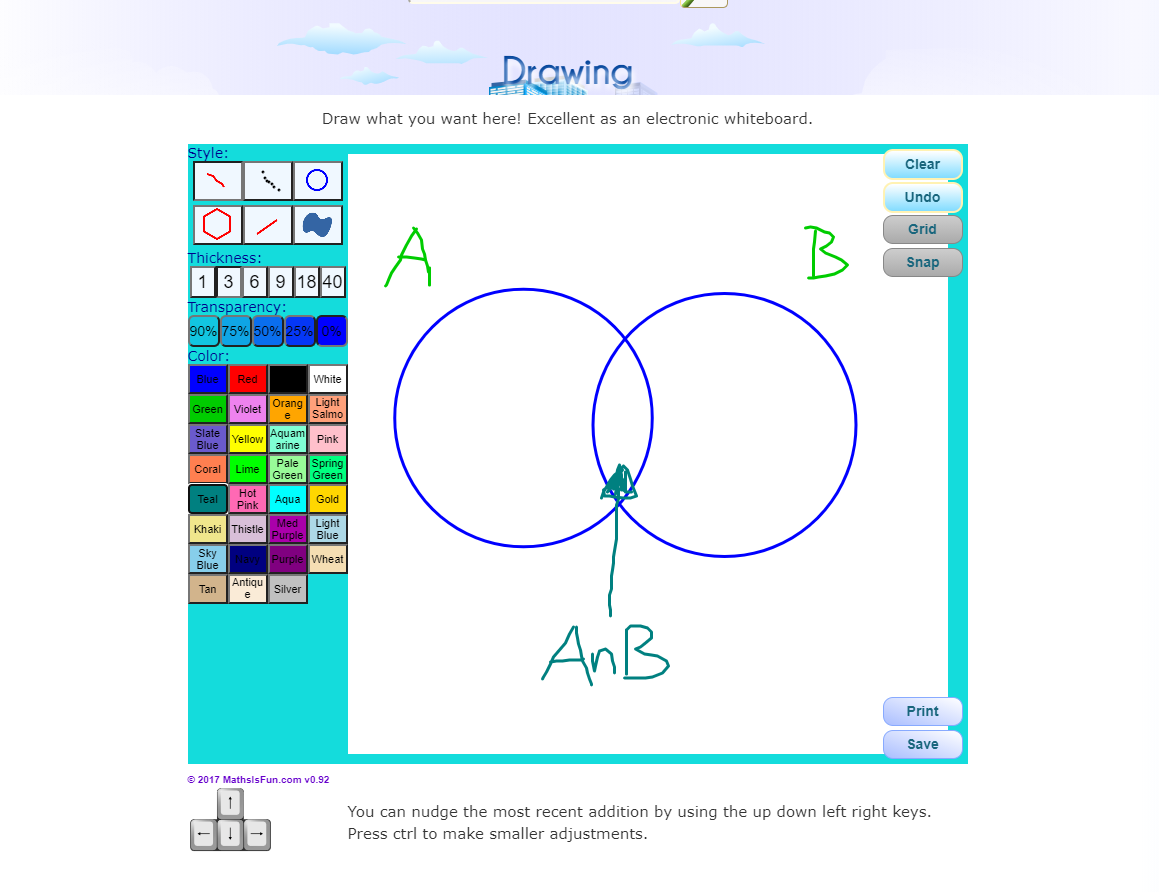 Math Is Fun Drawing Tool Screenshot for A Union B

You flip a fair coin and spin a spinner with the numbers 1 to 5. What is the probability of flipping a tails or landing a 5 from the spinner?

Answer With The Formula Method

Define the event A being flipping a tails and let event B be landing a 5 from the spinner.

For the probability of landing a tails and landing a five, the concept of independence is used.

Put all the pieces together to obtain the probability of landing a tails or landing on a 5.

Here is a table that lists all the possible ways from the coin flip and spinner.

You have two six sided dice and roll both of them. What is the probability that one of the two dice is a 2?

For this question it is best to use the formula. Using a table to list all the possibilities can take time.

The probability of event A or event B with mutually exclusive events simplifies to:

Examples of mutually exclusive events include: So glad you made it to the trending! I've been learning from your post and because your post, I am going to take math course formally again next month. Keep doing what you do !

Thank you. Which math course are you taking? I assume it would be online correct?

My background is not STEM and I decided to start from 7th grade math 🤣 being in art major for 5 years weaken my math ability. Thanks to crypto I can maintain a bit of it but other than those, yeah I forgot a lot of concept. And yes, it will be conducted online.