RE: Satisfying the global electricity needs without harming the vegetation

cwow2 in STEMGeeks • 3 months ago

Also, Solar panels and greens can co-exist, if the solar panels is lifted up above the groud and is transparent to some extend, then it can help some greens grow which doesn't need the fully blast of the sun + protect the ground :D

Also, allow no blade-turbines(small) to be place on homes for extra energy x)

People don't need laws when it is economically beneficial to incorporate solar. It is better to let people make their own decisions.

Thats clearly not working fast enough.
If you produce more energy than you need, the government pay you some money.

That's normally how it works. Take, for example, California in the US. Homes will typically get a return for excess solar they don't need during the daytime. However, the legislation is planning on adding a stipulation to this practice by requiring installation of home batteries. So, if you have a home battery installed AND solar, then you'd get a return.

I do not know if this change was passed in the state senate or if it even got there at this time.

Okay Cool! I love the addtion of a battery! Wouldn't mind that as a rule here aswell!

But we are limited to the amount of Solar Panels we can have here, since our Government don't want to pay us too much x)
Thats why I want to get rid of the rule to pay people with Solar panel.

They should rather take the money they save and give it to Solar Panel companies, so it could be cheaper to buy them and install them :D

Are you serious? People are installing solar as fast as they are able to produce chips.

20 years ago, it took more energy to produce a chip than the chip would produce in its expected lifespan.

Mass installation of solar panels at that time would not have made any sense.

Solar chip production produces some really nasty toxins. Most of the production is in third world countries where we don't see the impact.

Around 2010, we hit the sweet point where the electricity produced by a solar panel exceeded the cost of producing the panel. The graph below shows solar panel installations began to skyrocket.

It slowed during the pandemic. 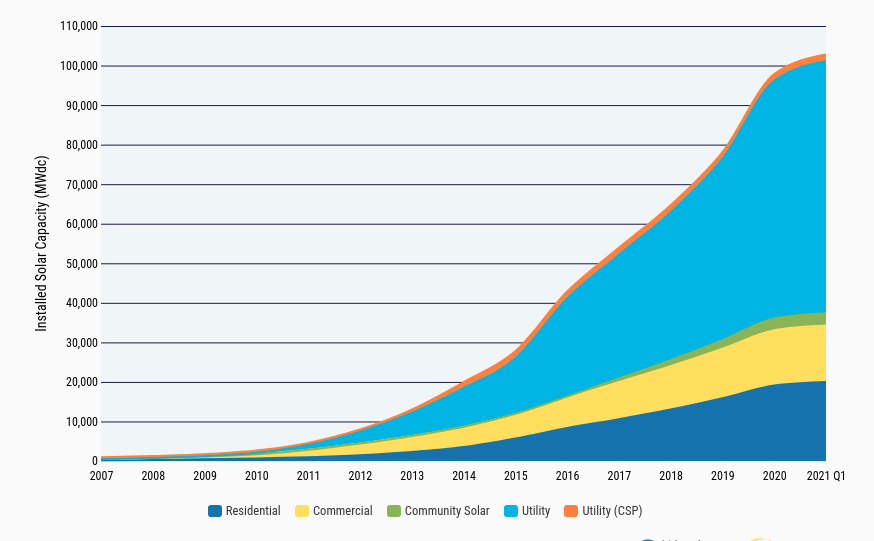 We are actually entering a weird phase where cities produce more solar energy when the sun is shining than people consume in the market.

The solar industry is growing gangbusters on its own. We really don't need artificial stimulus from the government.

I want to see solar panels on very home, so we don't have to use as much land field!
Way better way of doing it if you ask me.

Yes if every house has it and if they send the excess back to the grid, I guess we can get rid of the need for the enormous land field.

Thats why point, thats why I don't understand why more government doesn't do something like that xD

Yeah, greens can co-exist but definitely, the small greens cannot replace the number of greens that a whole tree can produce.

I just meant it as a win-win :D Solar panels + Greens for eating. Sounds pretty good to me :p