Things to consider about organic matter

amestyj in STEMGeeks • 3 months ago (edited)
Dear readers, organic matter is a component for the soil, the earth is made up of rocks, water, minerals and a small portion is made up of organic matter. Organic matter is formed through the decomposition of plants, animals and fungi that live in the soil, this decomposition is a slow and constant process in which microorganisms called bacteria and fungi act on the remains of the aforementioned components to obtain nutrients that are essential for crops. In this sense, some researchers such as Castillo (2005), they point out that agricultural soils should contain approximately 5-10% organic matter. 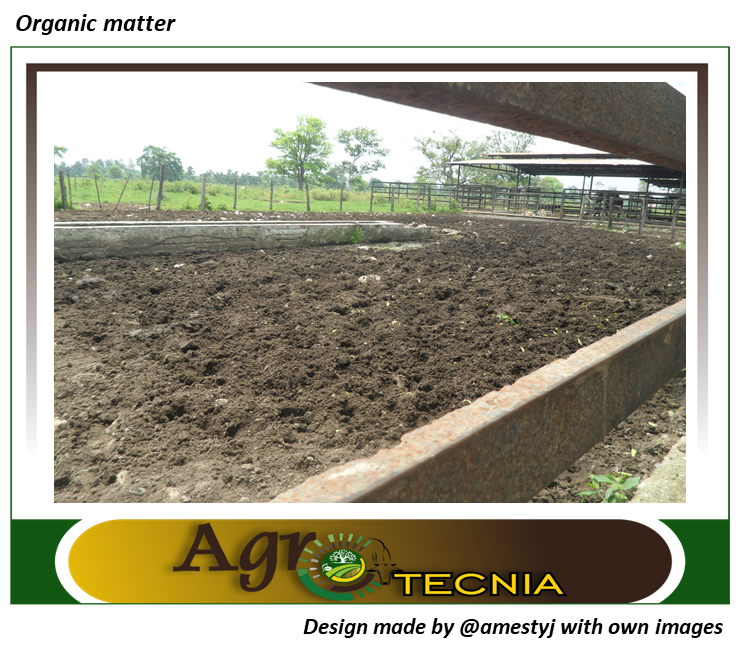 From the above it can be said that the soil is a mixture of mineral material, organic matter and water and the amount of organic matter depends on the local vegetation and the type of agricultural activity developed in the area. For example, in livestock ecosystems on areas cultivated with pastures, animals consume these plants and leave a vegetable remnant that decomposes progressively and, in addition, the manure left by animals when it is under shade decomposes correctly, where decomposing organisms known as dung beetles whose scientific name is Scarabaeus viettei also intervene.
In this same order of ideas, when organic matter from animals or plant material begins its decomposition process, there is a stage known as mineralization where they change from their organic form to an inorganic form as minerals that are mixed in the soil solution, to be absorbed and used by the plants and microorganisms present in the soil or simply maintained in the soil until they become humus through the humification process. Public domain image taken from Publicdomainpictures
The organic matter can be supplied to the soil in different ways, for example fresh with harvest residues or manure, and processed organic matter such as worm leachate, compost, manure tea, among others, can also be applied. In the case of compost, the same decomposition process occurs as in natural ecosystems where microorganisms decompose the materials that are added as straw among other elements, the difference is that, in the soil, the process can occur in the presence or absence of oxygen.
On the other hand, organic matter is important to maintain some characteristics of the soil such as its structure and moisture that is necessary for plants to absorb nutrients from the soil, so fertilizers have to be incorporated into the soil to provide organic matter that guarantees the progressive presence of nutrients that are correctly absorbed by plants. Organic matter is an important component of the soil, as it acts as a natural fertilizer. The nutrients found in organic matter are used by plants, through their root, these nutrients can be nitrogen, phosphorus and potassium, as well as other elements that provide energy to the plant, plants absorb these nutrients with irrigation water and land fertilized with organic matter can have better yields than those that are not fertilized.
Dear readers, although there is no single definition of soil organic matter, it can be induced that a type of material of animal or vegetable origin that can be recycled to the soil after a decomposition process in which microorganisms participate, among the material that we can consider as organic matter are leaves, dead roots, manure, bones, dead animals, among others. The advantages that organic matter can bring in cultivated soils is that it can increase the productivity of plants and improves soil fertility, therefore, it is necessary to maintain an adequate amount in agricultural soils to ensure the production of fruits, vegetables, grasses and other crops.

Organic matter is good for plants. It's better to use that one, than commercial fertilizer.

Hello dear @dehai, certainly organic fertilizers from my perspectives are better, because they do not alter agricultural ecosystems and provide organic matter necessary for the biological activity of the soil.