Some considerations on food alternatives the livestock environment.

amestyj in STEMGeeks • 4 months ago (edited)
Dear readers, it does not matter in the geographical areas where the livestock systems are located, the plant food by preference is the pasture which produces a large amount of biomass, in addition to this, the use of concentrated foods that tend to be expensive, but has become an industrialized food with a lot of demand, on the other hand, there are other plant resources in or around the production units that can supply some deficiencies in animals, such as legumes and tree plants. 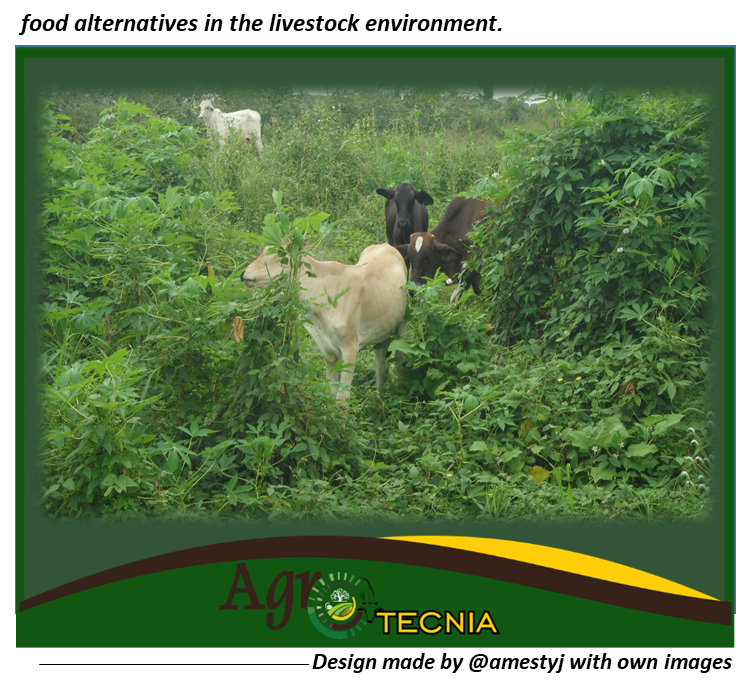 In the same way, in the tropical areas there are innumerable foods that can be considered as a reserve for the food development of countries such as roots (cassava) that contributes to both human and animal nutrition, decreasing the use of cereals in addition, this type of crops such as cassava require less resources for its production, in this type of plants you can get to use its leaves for animal feed, considering that it can provide adequate protein levels for the nutrition of ruminants. In this sense, Martínez (2019) pointed out that the cassava leaf can be used in the feeding of ruminants thanks to its high protein content that can be found at levels of approximately 26%, which can supply the deficiencies that pastures may present in relation to this element and reduce costs in the purchase of concentrated feed in livestock systems.


As for trees or shrubs, there are many varieties in tropical areas that can also provide adequate percentages of proteins, something that some producers are unaware of and because of ignorance do not take advantage of their potential, although currently there are many food alternatives and there is information about it, such as this publication that can reach many lovers of agriculture. When we talk about plants that provide good levels of proteins, we always think of legumes, but there are other species that do not belong to this family and are also great food resources such as Mulberry (Morus alba) and Moringa (Moringa oleifera), both with percentages of proteins that according to Mejias (2004) can range between 15 and 20%. On the other hand, we also have the famous legumes such as the matarratón (Gliricidia sepium), which is a bushy plant that can contain between 18 and 25% of proteins and no side effects have been known so far in the area where we do not find when it is part of the animal's diet, there is also the Leucaena (Leucaena leucocephala) which is also a bushy plant with excellent levels of protein but it is recommended to control its daily consumption because it contains antinuctrional elements such as mimosin that can cause according to Faría y Morillo (1997), the hair loss of the animal among other pathologies.
There are also species of herbaceous legumes which we will describe in future articles, which provide proteins and can be managed with the pastures inside the paddocks. In the same way, another local resource among many others that can be used for cattle feeding is cassava (Manihot esculenta), which has an adequate protein value, does not require large inputs for its establishment and development, in addition to not being demanding with the type of soil, when cassava is used it is important to take into account that according to some studies it presents levels the root shell and the tender leaves have cyanide, therefore, it is important to subject it to anaerobic fermentation conservation methods such as silage that according to Mejías (2004), reduce the amount of cyanide present.
Dear readers, in the ecosystems there is a great diversity of plant species that can bring great benefits to the livestock sector, a producer should identify the species that exist in their geographical area, with the help of technical personnel if required, after identifying it and knowing its benefits can begin to perform some tests on the diet and implement conservation alternatives to provide good quality food when critical periods arrive where the yield of pastures decreases.