abitcoinskeptic in STEMGeeks • 4 months ago (edited)

Spring is here, and so is Windows 11. Time to upgrade and take care of some other PC issues and projects I've been putting off for various reasons.

Now I know some of you may be thinking, Windows 11 came out like 6 months ago in October and was widely available by February. Well, you are right, but that doesn't mean it's a good idea to immediately upgrade. Also, I was too busy in February and March. My Windows 10 was working perfectly fine. I don't like rushing this stuff. Windows 11 To Upgrade or Not?

If you have a legit copy of Windows 10 (or 7+), it's free to upgrade to Windows 11, so that means the price is right for modern Windows users.

I recommend getting a legit copy. Pirating software is good fun, but in my opinion, it's not worth dealing with the harassment and hassle, especially if it is the OS on one of your main workstations.

In my case, I waited until my Windows 10 recommended I download something called "PC Health Check". It turned out to be a program that harasses me to upgrade to Windows 11. It started telling me it was available in my region and stable, but my current PC wasn't good enough for it.

For those who don't want to wait, just download it on the Microsoft website assuming you aren't running some pirated or OEM version of Windows that doesn't let you upgrade.

Well, it turns out, my current computer is good enough for Windows 11.

Preparing for the Installation

I back up all my photos and media on their separate storage drive and backup drive. I don't store media on the same drive as the OS. The OS drive is for working files and programs only, there are just too many problems. But, I also made sure that my system files were backed up properly and up to date.

After I made sure there were no viruses on my PC, my Linux drive was working fine, and my recovery/installation disk was okay. I took this screen grab on my PC that is currently running Windows 11, so it's true!

All clear! Good to go. Now, what about this PC Health Check?

Basically, this program just makes sure your PC is ready to handle Windows 11. I think Windows 7 was the last Windows which required a major computer power upgrade to run. Since then, every Windows upgrade seems to operate better on less powerful machines. So what's the problem?

Windows 11 requires a few BIOS settings that Windows 10 did not. Most of these settings have been available on BIOS since before Windows 10 came out, so unless your system is like 7 years old, you should have them installed already. However, there is one setting that is a little newer and has only been around a couple of years, I know this because my desktop isn't that old and it wasn't on it.

The setting I needed is called TPM 2.0. I couldn't find it in my BIOS, so that meant I had to update my BIOS (My board doesn't have the TPM chip on it). Updating or flashing BIOS always makes me nervous, it's one of the easiest ways to brick a PC, besides physically damaging it (I've been down both roads). Make sure you follow the instructions for your mainboard/BIOS to the tee. I recommend a licensed copy of Windows to save all the trouble. If you are too cheap (or a stuck-up techie) just use Linux. Also, backups and recovery are a must to avoid disappointing emergencies.

This is the easy part, basically, something will pop up and ask you if you want to start installing it. Then, it downloads stuff in the background slowly and probably does other stuff too.

A few hours later, it will say it is ready to install Windows. You need to leave your computer on, and you can't use it for a while. I used the opportunity to have a beer!

By the time it said it I was ready to use Windows again, I wasn't even done my beer. Actually, I don't even remember having to do anything asides from clicking something like, "I'm ready". the process is really automated now. It just uses the old system settings and files. After it was done, nothing was amiss...well, almost nothing.

After Installing Windows, because it wasn't a clean install, it's a good idea to make sure programs and applications work fine. I checked a few I really need, like the Internet. There were no problems and all was good.

However, there were some minor irritations. The taskbar was centred at the bottom. I'm not sure why this is the default. Do they want to give me stress? I promptly moved it to the bottom left. Thank god they didn't prevent that or make normal/classic-like mode difficult (Windows 8, I'm looking at you).

There are also some minor software changes. Cortana is gone (I disabled it immediately on Windows 10 anyway) also a few programs have been upgraded or no longer automatically come with Windows. Usually, this is for compliance reasons or just to stop supporting a really outdated program. The only ones that impacted me are paint 3d (I'm ghetto) and the snipping tool. Paint 3d is one of those ones that needs to be downloaded separately now. The snipping tool has been upgraded.

The last thing I did was make sure I have a new Windows 11 recovery disk. The recovery disk is 1GB but the installation media (recovery + clean install without downloading) is more like 5 GB. These days with a 16GB flash drive costing like $2, there is really no reason to just use the recovery disk.

I went here to use their official tool. Back around the Windows 7 area, I also grabbed an ISO and kept it on a backup drive or DVD, but these days I have multiple computers and really fast internet, so if the USB drive dies, I can make a new one quickly. Also, my DVD drive is installed, but it isn't plugged in internally. I haven't used it since like 2015 and just test to see if it works every few months.

I also did some other system backup stuff because I no longer need my Windows 10 backup stuff. It's only been a few hours and I'm already hooked on the new Windows!

Wapping Up & Why Windows OS?

I mentioned that I also use Linux. It's more for messing around and programming or doing advanced stuff. Actually, it's installed on the same PC. Windows and most programs are on a 500GB NVMe drive and I have a 1TB NVMe drive formatted in NFTS for media storage. I also have Linux Mint Cinnamon installed on a 128 SSD and a 2TB HDD for media and backup stuff in EXT-4 (ex. it's where I store my unpruned BTC blockchain.

I don't have a dual boot set up, if I want to boot into Linux, I have to quickly hit F8. I use the large 2TB HDD for hot backup and to transfer to cold backup by scripts. It's also connected to my new NAS server, but more on that later.

Who else runs Windows 11 or is thinking about it? If you have any questions, I'll try to help.

I don't have a spare drive for a full backup, so I haven't done the upgrade to 11 yet. I hate a lot of the layout stuff in the library computers post-upgrade, and not just the need to left-justify the taskbar. A lot of the right-click menus and program contextual menus try to decide what I need, and inevitably decide wrong.

As I've been using it more, I've discovered a few more annoyances similar to those you describe. The options and menus are all different, even when I right-click.

I wish Microsoft would ease me into it with like one or two changes per week or startup.

I find doing the backups to be quick, but I've been following the same procedure for years, so I'm well organized. Sometimes I forget to do it every month, and that was the case this time.

There is probably a setting somewhere to "show all right-click menu items: somewhere. I haven't gone digging yet. Our self-check kiosk is still on Windows 10 because that software apparently does not play nice with Windows 11.

The reason you couldn't find TPM (can also be under 'Security' in the BIOS) is because your mainboard doesn't have a TPM security chip.

Also be aware, that Microsoft have removed 'Remote Desktop' from Windows 11. Yup, thats right its completely gone, blown away, not there anymore. For some people this can be a clincher in deciding whether to upgrade, particularly people that might work from home and need to remote a work PC at a remote location.

Seems like you've looked into it. Thanks for reading!

I didn't know about the remote desktop being removed. Haven't tried it yet. I wonder if they will introduce something else? I have Linux dual boot, a NAS server, and also use office 365 and clouds, so if I want to do remote work, I can use those.

Actually, the reason I upgraded was to do stuff using WSL 2 and VSC which required enabling 'virtualization' in my bios. That was off by default. I decided to upgrade the BIOS while I was messing around in there because I knew I would need to for Windows 11.

I have yes, I fix computers for a living. Apparently you can buy a TPM for some boards that use a PCI slot on the board however it appears these are like hen's teeth as production was cut due to no demand then MS brought out the upgrade requirement and any that were in existence were snapped up over night by the public and I suspect computer repairers.

Such a boring use of pci. I have mini atx so pci slots are at a premium.

Actually the module fits into a TPM connector on the board (if it has one) - see maketecheasier.com/install-trusted-platform-module/ 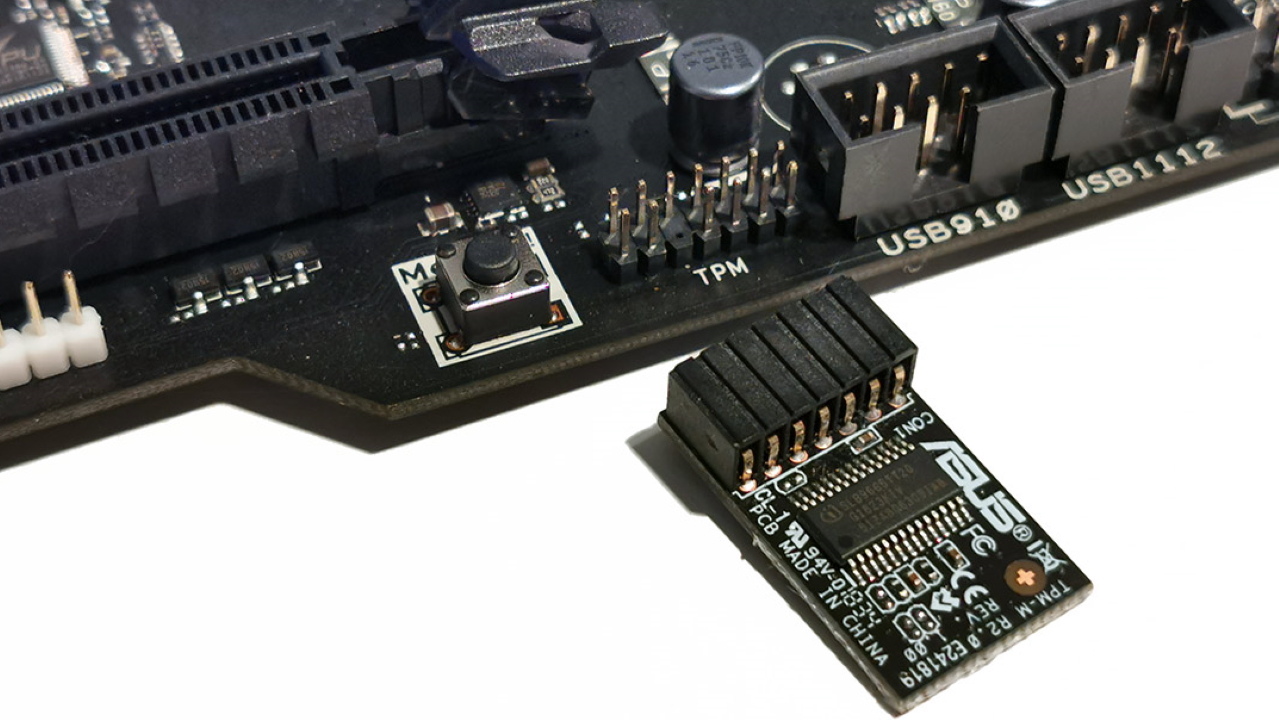 You definitely know your stuff. I know who I'm tavging the next time I build a PC.
I just checked and my board has that. Windows 11 works fine though. Do you think it's worth buying?

You shouldn't need it. If you managed to install Win 11 then you already have the chip built into the board. I'm guessing the fact you have that connector is so you could upgrade the fixed TPM chip to say a TPM 3.0 chip should they be released at a future date.

Thank you. I plan to make a far more complicated one next time I touch on computer stuff.