Torturing the fishies: talking to the AI and some ramblings about Art

I've been fascinated by some of the recent AI-generated work that's been posted here recently - previously, whatever I saw was just "meh, wtf is that half-formed thing?", but others posting here showed that it's all about giving it the right prompts and having a decent aesthetic sense in the first place. I don't often post art or art-related stuff, but it's a part of my life that I want to re-explore. Previously, I worked in the film and fashion industry as a skilled artisan, as well as making a living from hand-work for most of my life, before I got tired of poor pay, brutal working hours and all the other exploitation that goes along with those careers. 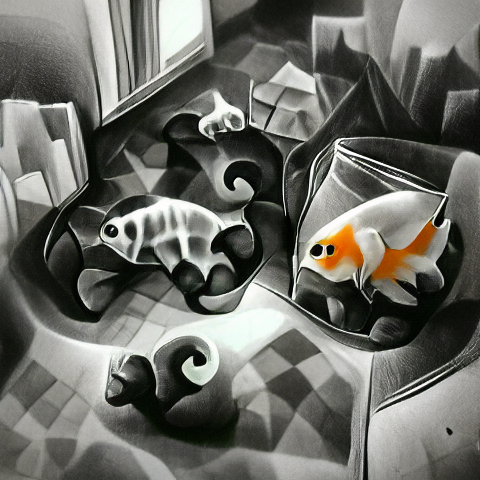 After school, I really wanted to pursue a fine art training but life got in the way and I ended up in the informal side of things. I've always been better at making things that are three-dimensional, and in awe of two dimensional art, while lacking the time for the training to produce good work in two dimensions. In traditional arts, it's also expensive to paint so I love the digital world and ctrl+z. I'm loving the possibilities of VQGAN+CLIP although I don't see this as "lazy art". The AI paints in its own way and constantly changes elements of the images as it continues working and there's currently no way of telling it to leave particular elements alone so each rendering leaves you with things you like more, and things you like less. 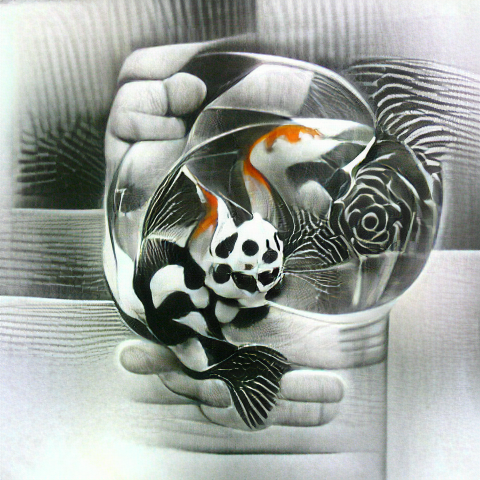 Ultimately, it will take a lot of masking in Photoshop to create exactly what I want from the AIs output. It's also clear, from experiments that the AI doesn't really understand graphic 2D drawing and attempts to make everything more three-dimensional although that's also where a lot of the fun and randomness of the AI's work comes in. All of these images are from "fish" prompts to the AI but it seems convinced that all fishes are secretly ultimately orcas, haha. Many people feel bothered by AI art because in time, it will automate many processes still done by humans, especially in the world of gaming, film and concept art. I know first-hand what it feels like to be replaced by machines, and to be undercut by having work outsourced to cheaper labour in poorer places or have my work simply included as the output of some other famous name. There isn't much to be done about it except move on. On the other hand, when I was 18, I worked for a screen printer and we still used Letraset and darkrooms to do basic printing and I'm not sorry that those days are gone. An ancient Chinese curse says: "May you live in interesting times!"

Love the curse lol May you live in interesting times!"
Interesting pictures. Strange but interesting nonetheless.

Yes, it truly is a double-edged sword.
I was told that the images are generated using Perlin noise, which is an equation that is random but still harmonious

AI is here to stay and as technology continues to be developed, it will continue to put people out of work. This is a reality and learning to change with the times is a little difficult for us old-timers.
We do live in interesting times and I think they will be getting more interesting over the next five years.

Yes, it never ends. I have seen a lot of change in my time and while it's hard, I always enjoy learning new things

Great images, although machine-generated.
Artificial intelligence is improving more and more. Perhaps in the future he will play a significant role in people's lives.

I don't doubt it

Awesome post. I have a very similar experience and i have been playing around with the same AI art and it's been a fun adventure. I will post about it soon but thanks for sharing a more in depth description of your experience with multiple images. I look forward to seeing where these colabs can take art as a whole.

Thank you. We are definitely going to see a lot of new and interesting trends emerge in art

Yes, AI is moving as fast as it can to replace things done by humans. But it is important to note that AI can't be creative. So, if you want to keep your job, try to work in a field that requires creativity, like for example art!

It sucks most of the creative fun from doing things traditionally and even in digital but serves some avant garde for a genre where AI art meets artist and co-create. I see the program as more of a modern tool as the artist still shapes the overall flow but in operation, it's not that hard to imagine some people would just press buttons and pump out pretty pictures for content without understanding the principles behind like basic foundations of traditional art. Seems like the humble beginnings of a whole new era for art. Might ponder about this more later.

Those a awesome looking fishes even with orca traits. I do collect beta fish images from pinterest.

When you have done enough art for a living, the fun is all sucked out of the process anyway

Thank you for sharing your experience, dear @nikv . I have heard about this sort of art but never accepted. Now I am on the way of changing my mind 😁

An open mind is always good!

Interesting work.
My perception: in the first photo this is the world of fish,
in the second photo that it is in our hands and we must take care of it

It would be nice if artificial intelligence could still explain the meaning of his work :-)

It's interesting that you saw that, those are part of the word prompts I gave to the AI. Haha, I think that all art really is about viewer interpretation

I really like to look at pictures and often I have a question: "and if I had a different mood now, would it affect my perception of the picture or not?"
Although, after thinking logically, I could answer myself that yes, it would.
But in practice?

Some interpretations are universal, some not

I am blown away by VQGAN+CLIP, I am about to put the lyrics of my song to see what comes out!

Few years ago I remember Google's AI called Deepdream, that got me entertained. I am always a bit reluctant also, because it's a doorstep to transhumanism and we might lose our humanity in the process, but our lives are already govern by AI.

You made me think a little on this one, good job!

Thank you. I'll be curious to see what it does.