Aristotle and the Birth of Analysis: What Role Should Logic Play in Society?

yintercept in Proof of Brain • 5 months ago

I achieved my goal of a post a day in August. I think I will try to do the same in September. I want to have a short and concise introduction to Aristotle that encourages people to want to study logic. I will add the #STEM tag to this post as Aristotle is considered the father of #science. I found this picture of the bust of Aristotle on Creative Commons . This bust was made by Romans and is claimed to be a copy of the original in Athens. 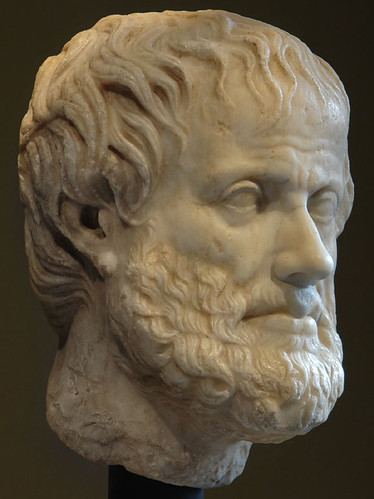 Aristotle and the Discovery of Logic

Aristotle (384–322 BC) was the son of Nicomachus who was the personal physician to King Amyntas of Macedon. On his father's death, Aristotle moved to Athens to study at Plato's Academy.

As a scholar, Aristotle was deeply interested in the nature of the mind and the inner working of ideas.

Aristotle loved to classify things. He noticed that some arguments led to folly while others led to promising results. Arguments that lead to folly are called "fallacies." The form of argument called a syllogism has the most promising result.

For a syllogism to be valid, the conclusion must be true or false. A statement that does not ovulate to true or false is not a valid syllogism.

The "if then statement" used in computer science is a form of the syllogism.

One can string syllogisms together and created complex theories.

As such, Aristotle laid the foundations for disciplines including biology, physics and other sciences.

Aristotle would see HIVE as a HIVE as a string of syllogisms executed in the æther by computers called "witnesses."

King Philip II of Macedon hired Aristotle as a tutor for his son Alexander.

Alexander applied logic to the field of military conquest.

Alexander led phalanxes of soldiers that conquered the Achaemenid Empire which included Egypt and Persia.

Alexander became ill and died at the age of 30. It is possible that he was poisoned.

Aristotle and the Lyceum

Aristotle had returned to Athens to start a school called the Lyceum. On hearing of Alexander's death, Aristotle fled

The Lyceum developed an extensive curriculum which applied analytic thought to a variety of topics including metaphysics, biology, physics, political science.

He made many valuable observations. Some of his observations were wrong. Aristotle was also a notorious elitist.

The Role of Logic in Society?

Historians consider Aristotle to be the father of logic. People who apply logic to different topics can achieve remarkable results.

The application of logic to the study of natural phenomena is called science.

Alexander applied logic to military conquest and conquered much of the known world. Because logic was used in war, should we see it as a weapon?

The development of logic set up a bizarre pattern in history. A group will discover the power of logic. They will use logic to gain power and prestige.

The following generations would realize that the power gained through logic was not based on their personal merits but simply on an improved ability to engage in reason.

To protect their position, following generations would try to prevent rivals from studying logic.

The rulers of the ancient world will completely suppress the study of logic.

There is a strange pattern in history in which one group discovers logic. People from this first group accomplish amazing things. The group that inherits the prestige from from the first group realizes that their position is tenuous. Anyone who learns logic could challenge their position.

To protect their position, the new ruling elite then tries to kick the ladder down behind them. They then construct impediments so that others do not benefit from the deductive sciences.

The fact that the father of logic felt it necessary to flee Athens highlights this problem.

I haven't studied much philosophy since my research into stoicism earlier this year...so I found this really useful. Good job and keep up the consistency throughout September

IMHO, it was Aristotle's discovery of the syllogism that really got things going.

Socrates was stuck in a rut. He would spend a whole day on a definition. But he couldn't use the next day because another Sophist might flip the definition upside down.

Plato had his forms which indicated that there is some validity to the ideas rushing around in our heads.

Aristotle's focus on the form of arguments made it so people could start building larger world views. This made it possible for Zeno of Citium and his followers to devise the Stoic Philosophy.

Very good analysis, mate! All that's left is to use the #poblosophy tag

It's exactly the kind of content that would fit in it :)