COVID19: 'Experts' in Lancet Who Claimed Wuhan Lab Leak To Be 'Conspiracy Theory' ALL Have Direct Involvement With the Labs in Wuhan! Dangerous Research Continues Even NOW!

ura-soul in Proof of Brain • 2 months ago

Letter that called Wuhan lab leak origins of SARS CoV2 'Conspiracy Theories' and sought to bury SARS CoV2 origins in Wuhan labs, published by 'Prestigious' Medical Journal 'The Lancet' - was written exclusively by 'experts' directly connected to the labs. ALL 27 of the 27 co-authors have been traced to be involved with the labs in question! The letter originally served to heavily distract the mainstream thinker away from investigation of the labs, despite serious researchers knowing that solid evidence connects the virus' origins to the labs in China (Funded by the US Government). The dangerous 'research' continues to this day and you are being repeatedly lied to by extremely dangerous people claiming to be 'protecting' you. 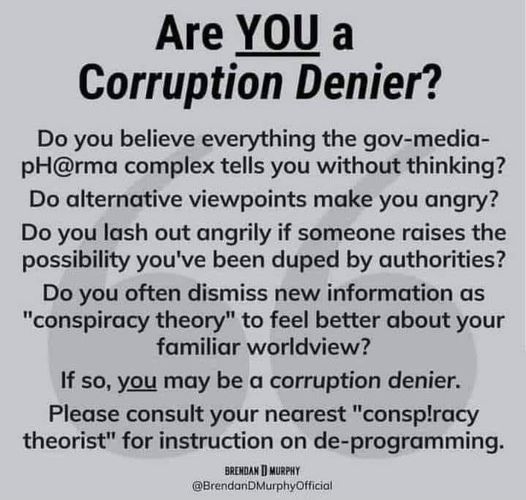 As I was reporting way back in March 2020, solid scientific evidence points clearly to a strong likelihood that the SARS CoV2 virus that causes COVID19 was engineered in laboratories in China, funded partially by grants issued by the US government and Dr. Anthony Fauci. That means that the very people who claim to be 'protecting' the world are actually probably causal in exactly the problem that they claim to be protecting you from. This began to be seriously picked up on by the mainstream in May 2021, yet even they continue to obscure the truth that this was well known by some of us in the public over a year earlier.

Also in March 2020, a letter was published in the (previously) 'prestigious' medical journal in the UK called 'The Lancet' which sought to demonstrate that the labs in Wuhan were not responsible for SARS CoV2 and that it was a completely 'natural' virus. At the time, this was apparently sufficient enough distraction for many 'journalists' and 'experts' to publicly speak out to claim that they somehow knew that the virus was not of human origin. It turns out that 100% of the co-authors of that letter were connected to the labs in Wuhan and had vested interests of one kind of or another in nudging public perception away from the labs being culpable.

After researchers dug into the background of some of the authors it became apparent that some of them, in particular a man called Peter Daszak, were directly being funded millions of dollars by the US to work specifically on creating deadly forms of viruses made from SARS CoV1 and bat coronaviruses! These are exactly the precursors to the current virus generation, SARS CoV2 and their works is exactly the work that could lead to the existence of SARS CoV2. More recently this was raised in the US Government publicly as Senator Rand Paul challenged the US' Dr. Fauci who gave a bumbling response, denying that the research existed and then denying it could have led to 'gain of function', meaning more deadly strains of viruses.

This all led to the Lancet publishing a very weak and sloppy attempt to clean up their records by inviting all of the authors of the letter to publish more information on their conflicting interests - any relationships or facts that people need to know about which may lead them to lie - essentially.

Addendum: competing interests and the origins of SARS-CoV-2

This addendum and related writing by Daszak was a predictable attempt to remove all possible responsibility from his group and essentially to explain that he was a champion of humanity - not at all a reckless and dangerous 'scientist'.

Only a few days ago we learned through Freedom of Information Act Requests that not only did Daszak's company 'EcoHealth Alliance' receive even larger funds from the US NIH, but they even received a large grant in 2020, which is ONGOING even NOW to research SARS CoV2 and, amazingly, to create NEW CHIMERIC VIRUSES! THEY CONTINUE TO DO EXACTLY WHAT THEY SAID THEY WEREN'T DOING! Such bare faced lies.

Now, UK newspapers have exposed that 26 of the 27 co-authors of the Lancet letter have competing interests as they are all tied in one way or another to the labs in Wuhan, China! Why is Wuhan such a common place for virology research to be performed? Could it be that the lax standards there and corrupt system is fertile ground for dangerous research that is banned in the rest of the world?

This piece in the Daily Mail, based on an article in the Daily Telegraph, traced in depth, the connections of each of the scientists and how they related to the Wuhan labs. All of the co-authors were either funded to work on the projects in Wuhan, in collaboration with people who were, funded the work directly or were otherwise closely connected. Ralph Baric, one of the primary researchers who I identified in early 2020 is on the list, among numerous others from around the world.

The only co-author who could not be tied to the labs was Dr. Ronald Corley, but internet sleuths have now turned up a letter which shows that he too was directly connected to the labs in Wuhan, making 27 out of 27 of the 'independent' experts absolutely the opposite! It turns out that Dr. Corley was involved with Eco Health Alliance directly and in extensive ways!

How many times and in how many ways are you going to be lied to about SARS CoV2 and COVID19 before you are honest enough to end your denial and stand up for yourself, your family and for the truth!?

Please check out my full list of articles on the Hive blockchain, I am posting on this topic every day and constantly sharing information which is buried in the mainstream but which may ultimately be proven to make the difference between life and death for large numbers of people.

Thank you for compiling all the information in one place. Great job!