ura-soul in Proof of Brain • 2 months ago

The Australian Government's drug adverse event reporting system (DAEN - TGA) shows more deaths likely to be attributed to COVID19 shots than to COVID19 itself in Australia. This is the same pattern as in the USA and elsewhere.

As a systems engineer I have studied systems for most of my life and in the last 20 years I have been particularly interested by systems created to monitor and support health - but sadly, not for the reasons you might hope. The main reason has been that I learned a long time ago that decision making within the 'healthcare' industry is often motivated not by health but by greed and denial. This results in many people dying annually who do not need to and worse than that, many of the people who profit from the situation walk away unscathed and even as heroes.

With all this in mind, I am especially interested in monitoring the the result of the experimental COVID19 shots. Almost every day I see new reports of studies that confirm what I and others have been saying all along - that these shots are nowhere near as effective or safe as the hype from the manufacturers made claim to and that unthinking individuals parrot without digging deeply.

Here I will look into the Australian government's own publicly available data on adverse event reports following administration of the COVID19 shots. Australia is a particularly interesting area to explore because the numbers of COVID19 cases and deaths there is so low. My previous posts on the US VAERS system and the EU's equivalent system both show that the chances are that more people are dying from the shots than are dying from COVID19 (this is not even including the number of people seriously injured (for life) as a result of the shots).

While it is true that these systems warn that they alone are not sufficient to determine whether someone has died from a drug or vaccine, it is also true that we don't have much other data to go by and we have very good reason to think that the number of reports to these databases is hugely low as compared to the actual real world situation. As stated previously, a US government report into the accuracy of the VAERS system in the US showed that it may be under-reported by around 100 times - meaning that every report listed must be multiplied by 100 in order to reach a realistic number of possible events across the nation.

Before COVID19, pro vaccine advocates would say "Vaccines are safe and effective, just go and look at how low the numbers of adverse reactions are in VAERS". However, now that the number of reactions in VAERS is sky high, they say "oh, you can't use VAERS it's not accurate enough" - they cannot have it both ways.

It is more than reasonable to point out that while not all cases of death reported to these systems are truly due to the drugs in question, at the same time the number of cases being reported is well known to be tiny compared to actual cases. This means that using the numbers of reports in these databases is reasonable and highly likely to be low/conservative when compared to real numbers. It is abundantly clear that resources put into monitoring this data is far too low and so this leads to yet another problem - who do we trust to accurately show the truth?

Personally, I use my own digging in to the numbers in conjunction with studying health principles and listening to the real world feedback I can pick up from the internet and directly from people I meet. This is all I have available and I feel I am more than justified in raising extreme alarm when it comes to these COVID19 shots. I am not alone, many doctors and expert researchers have said the same. We have even seen a German director of Pathology stating that 40% of autopsies he performed on vaccinated COVID fatalities showed the death was caused by the shots themselves.

The Australian adverse event database is here, however, I found it was broken for most of the day here and only just started returning results after about 6 hours - this may be due to an increase in public awareness of it's existence. 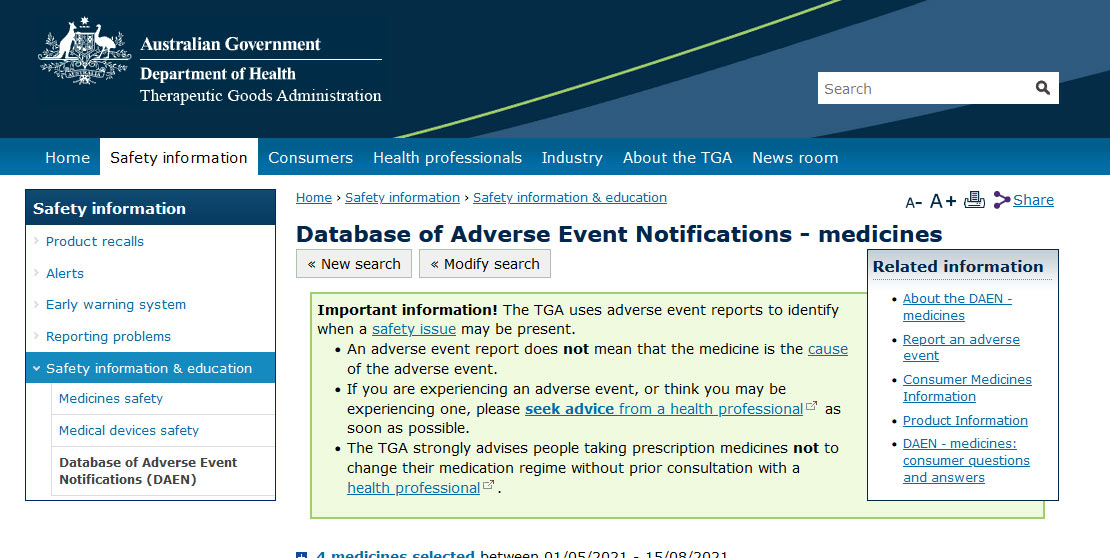 I ran a query to highlight adverse event reports to all 4 of the COVID shots listed in the database since May 2021, the beginning of the Australian vaccine rollout.

The database recorded a total of 35087 reports and 330 deaths possibly caused totally or in part by the COVID19 shots. 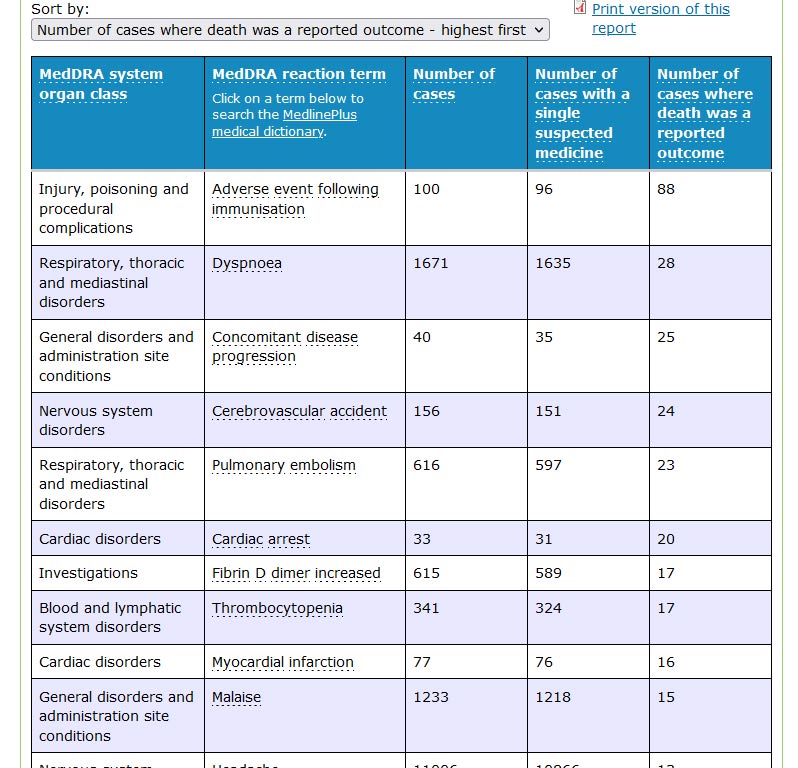 As with the USA and EU systems, we see that cardiac, neurological and respiratory symptoms were most highlighted in conjunction with the adverse reaction and death.

Previous analysis of VAERS showed that most people who were logged and who died, did so within 48 hours of being injected. This is likely to be the case here too, but I don't have that level of information for the Australian system at present.

We can see from the Bing COVID tracker that Australia has logged 993 fatal cases attributed to COVID19, however, the inaccuracies of the PCR tests being used mean the actual number of deaths is in question (as it is everywhere at this point). The actual number of recorded deaths from COVID19 since May 2021 in Australia is well below 100 - closer to 60.

This means that the number of possible deaths logged due to COVID19 shots is roughly 5 times higher than the number of deaths due to COVID19. This is a conservative figure because it is quite likely that the adverse reporting system is under-reported. We also see that Australia's full vaccinated rate is currently 31.4%, which means that we can reasonably project that we will see at least another 3 times the number of deaths logged for adverse reactions to the shots if the entire population is injected.

Clearly, the relative chance of death due to complications of the effects of the shots in Australia is likely to be higher than from COVID19.

There are numerous uncertainties with this data due to poor data collection and limited reporting functionality. Additionally, the testing for COVID19 is in question too. There are those who will say, 'well, the deaths from the shots are worth it because many more would die without them' - but is that really true? Would the people who become paralysed and who die agree with you?

This woman, seriously injured from the shots certainly does not:

This fits nicely with data from US military staff where as well the side effects from the vaccines outnumber the actual virus-related fatalities!

Yes, I posted that video to hive a few days ago too. The pattern is global as far as I can see. Everyone needs to put time into this to make sure it isn't buried because you can be sure that those involved are literally banking on everyone's denial, naivety and apathy.

To have the already difficult to locate DAEN URL censored off FB (FB is what social media platform Australians use most of, putting them into one of the nations with the highest per capita usage of the platform).

Thanks! That's not entirely surprising considering I was banned for 3 months for sharing an anti-nazi meme. lol. I suppose the nature of their enforcement tells us who is running them.

Quite an exposing report i must say. There is more to this covid 19 than meet the eyes. Lots of secrecy shrouded the whole story from the start in china, to the cure presently maybe its for the money or just a way to reduce population of the world. Am just certain their is a bigger fish to this.

Absolutely, as soon as I saw a billionaire from Wuhan (a place I had never heard of until a few days before) try to shut down the Steem network's free speech within days of COVID spreading, I knew something was majorly wrong with the situation.

Yes some thing is definitely fishing about the whole case.
One thing is certain sir, the truth will show up one day and we will be alive to see it

Yes, you got the point

That's good, thank you for updating the new to the community about COVID-19 in Australia and USA.my advice to the public is that let everyone do the needful by preventing his or her self from the pandemic.