What happened to the Yellow Bird? 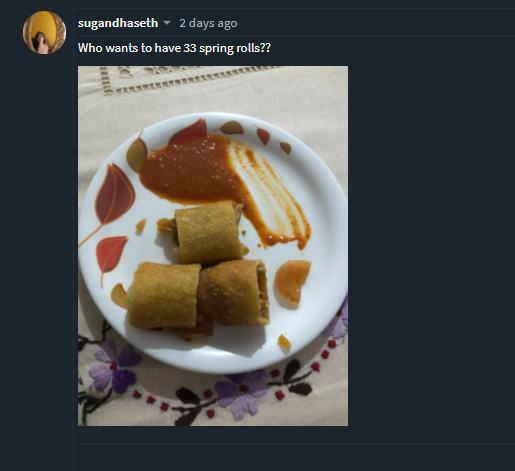 People in Proof of Brain do have brains and used them in the Greedy Yellow Bird contest. Check it out here .

I was amazed with the participation, creativity and wit of the contestants. They won big time delegations.

The game was working even better than usual and everybody was counting comments correctly. They learned to count the comments made only on the main post not comments on comments. They learned not to count automated comments. Things were going smooth, too smooth.

Things were beginning to look boring and that is not what the game is about. I know there is a problem with edits so I do not allow comments with edits to be counted. Well I thought then it wouldn't hurt to add some non valid comments from time to time.

Then things became messy. Our friend @trostparadox.pob through in an imaginary number 23i. Oddly enough that comment was not at the 23 place but at the 22 place. For a while all the comments were off just by one number.

She continued comments like this even giving us numbers from her clock at home and finally telling us how many sandwiches she had for breakfast. Good minded people like @vikbuddy and @funshee continued to count only comments with the format "Comment # ______" although I had written no rule about making sure the comment number was in any particular pattern. The rule was that a number needed to be added and @sugandhaseth did add a number. He is very honest. The rules say:

Do your best to number your comment. I will not tell you if your number is right or wrong until the contest is over. Some people might miscount. That doesn't make their comment invalid. It's up to you to do your best.

He did his best to number the comment. This rule did allow for some fudging. Although I did edit my first comment I did not edit the comment for comment number 38. I numbered the comment with the symbol for an irrational number.

Now the count was messed up by three. I felt that I should at least let everyone know what number we were on at #41 so I made a comment with a big hint and then erased the comment so only those who really wanted the 40 POB delegation badly enough to check the blockchain would get it.

That's where @sugandhaseth came in and swooped up comment #41. Nobody would have guessed that she was comment #41 but I have a feeling she knew it too well. She really does have a brain.

From there is was just a couple comments to #51.

I'm glad to see people using their brains and interaction on Proofofbrain. I will provide a rule in the next game stating that comments with the format: "Comment # _____" are valid comments. I'm apologize for any unnecessary confusion. You are free to add any numbers you like as long as you use that format.

delegations are good for one year

I will send the delegations tomorrow as well as two prizes for most consistent participation To @vikbuddy and @funshee.

Wow! This is amazing. It's fun actually @mineopoly. Good work on this!

This was a fun comment contest @martinstomisin. Next time I plan to call out more people and give rewards to more comments. Maybe to 61.^^

In this way, it can bring people together.

I enjoyed so much playing this game this time, it was so much fun. Thank you for this amazing contest. It was not only engaging but very interesting also. Looking forward to the next one!

I learned a lot from you.
I still wonder if you knew what you were doing or if it was by chance.

Ya I knew, and I also knew when I posted comment no. 32 saying it was 31. I learnt immediately after I commented, there was an edited comment which caused a miscalculation for me. And then I was waiting for no. 41 which I achieved, thanks to you 😀

I didn't want to take the #41 place. That would be no fun. Someone happened to be awake enough to realize what was going on^^

How well the game took a U turn in the middle, That's amazing. So much to learn from this, awesome. Good job everyone, keep it up. 😊👍

Everyone learns @vikbuddy and we make it even better the next time. It is really a battle of the brains.

For most active participation

Ha Ha, thanks dear 😊🙏. But engaging with you and your contest is way more fun and interesting. Keep it up 👍. !LUV

@d-pend this one is for you

@mineopoly you really did a great job and your interactions with all the participants was top notch, have learnt even more from this game.

We all learned @funshee and you were one of the most consistent players on the comment game. I'm proud of you for sticking with it.

Our winner for Comment #51 @d-pend may be feeling shy to claim his prize but I want to share some POB power and remind him of a POB secret. Use POB power and it snowballs back to you.

Lol, @sugandhaseth really gave them a run for their money!..
Happy to see there were a lot of drama in this last contest even if I wasn't really part of it.

Congrats to you all winners

This was an interesting one @chicoculbert and every couple of weeks I will make some contest like this. I can't handle every week yet. Just when I think engagement is down and thinks look boring I will throw in a game^^

@chincoculbert! I sent you a slice of $PIZZA on behalf of @mineopoly.

That was a fun game and I like playing with the numbers mostly, thanks for the fun. Oh I won too, thank you and congratulations to the other winners too. A great turnout by all!

Ring ring ring I like those telephone games too. Can you imagine a game of broken telephone on here? I'd break it on the first go I think haha

How are you sunset master and what's the new from Blurtland? I liked Blurtphone at first but then it got difficult and wasn't fun anymore. This is still fun but I will have to make some adjustments and basically that will be to ask participants to call a friend and add at least one sentence in the comment.

What do you think you need to learn about first?

I think the additional sentence in the phone game makes sense. These contests are a fun but large undertaking from what I've seen. Thanks again for running this for everyone.

What do you think you need to learn about first?

You mentioned something about check the blockchain in one of your cryptic comments and I wasn't sure what you were talking about is all.

You can find the original comment there before the commented is edited. Every action you make is immutable and recorded into the code... so you can recover what comment orinally said before it was edited. I will go into method in a post.

This is one place you can see through the blockchain:

I see all the secrets now. Thank you

I was gonna write a post but once you get to that site it is pretty self explanatory :)

Thank you, I had a lot of fun playing and engaging with everyone.

Well well, this is amazing! I'm surprised I got comment #31. Its interesting how it all went. Well done everyone!

Thank you! I've been trying to comment via POB frontend but it keeps saying "missing posting authority".

Do you have any idea why that may be happening?

I'm having the same problem here , I have no ideal what might be wrong.

Maybe it's something wrong with the site

This game is really with the brain.
Congratulations to the winners!!