A quick glimpse to the next "New Normalcy"

“COVID-19 has accelerated the arrival of the future of work” “The pandemic has disproportionately impacted millions of low-skilled workers” 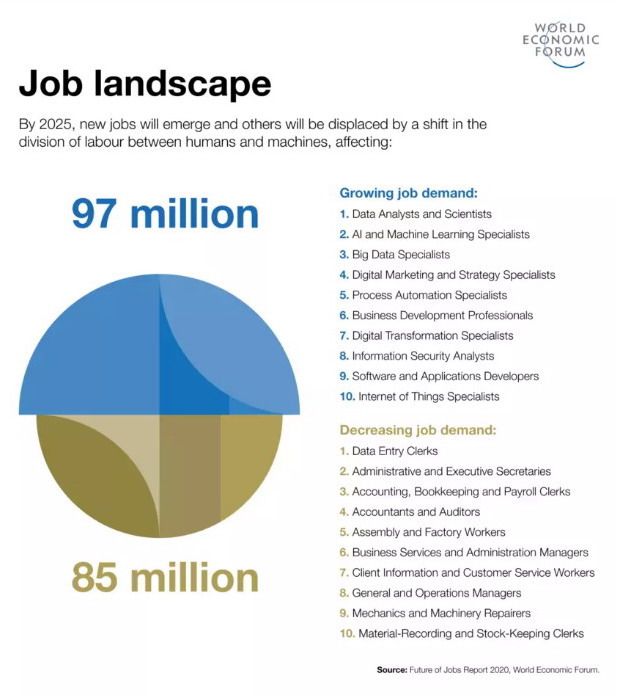 By 2025, employers will divide work between human and machines equally. Roles that leverage human skills obviously will rise in demand. Machines will be primarily focused on information and data processing, administrative tasks and routine manual jobs for white and blue-collar positions.

But even more jobs – 97 million – may emerge that are more adapted to the new division of labour between humans, machines and algorithms. As the economy and job markets evolve, 97 million new roles will expeditiously emerge across the care economy in the fourth industrial revolution technology in industries like artificial intelligence and in content creation fields. The tasks where humans are set to retain their comparative advantage include managing, advising, decision-making, reasoning, communicating and interacting.

For those workers set to remain in their roles in the next five years, nearly 50% will need reskilling for their core skills.

An average of 66% of employers surveyed expect to see a return on investment in upskilling and reskilling of current employees within one year.

Around 84% of employers worldwide are already set to rapidly digitalize their working processes. Including a quite significant expansion of remote working. Employers say there is the potential to move 44% of their current workforce to operate remotely sooner than later.

According to The Future of Jobs Survey, core skills such as critical thinking, analysis and problem-solving are always consistently top of the reskilling and upskilling priorities for educators and businesses. Newly emerging in 2020 are skills in self-management such as resilience, stress tolerance and flexibility.

Some reports claim that those in employment are placing larger emphasis on personal development courses. While those unemployed have placed greater emphasis on learning digital skills such as data analysis, computer science and information technology.

Well, as you can see my dear READER. This has been only a very brief and concise report of how I appreciate the present panorama of what many tend and will tend to call "The New Normalcy" in the course of these next months and perhaps also for a few years. And just take in account I have not even mentioned cryptocurrencies and blockchain technologies.

Because for that, you may have to dig into other previous anticipatory sources with greater vision, optics and scope.

And last but not least, just a simple question: ¿Do you have children school age?

Well, we have children in their late 20's early 30's and grandchildren under 10. The concern for us is mostly what sort of world they will have to live in.

Whereas there's little doubt that some new jobs will be created in "new" fields, the problem I have with that whole "jobs survey" is that it tries to project the future based on past/present projection methodology. To me, the false assumption is that we're actually going to retrain humans to do these "new jobs" AI is already evolved a long way towards doing. I think it more likely that the job market might see 85 million "old" jobs vanish, but I doubt more than maybe 40-50 million of these new jobs will actually be filled by humans, leaving 35 million+ in a permanent state of "Sorry, but you're simply not NEEDED anywhere." And that's through no fault of their own. Hence the legendary "arts and creativity based" economy of previous futurists may end up being a forced reality because unless people have some kind of currency, they can't actually buy the goods and services provided by the AI and automation.

Then the "wrinkle in the equation" becomes shifting away from the notion of "corporate profits" (and greed!) for the simple reason that simply hoarding corporate profits as "investments" is ultimately unsustainable.