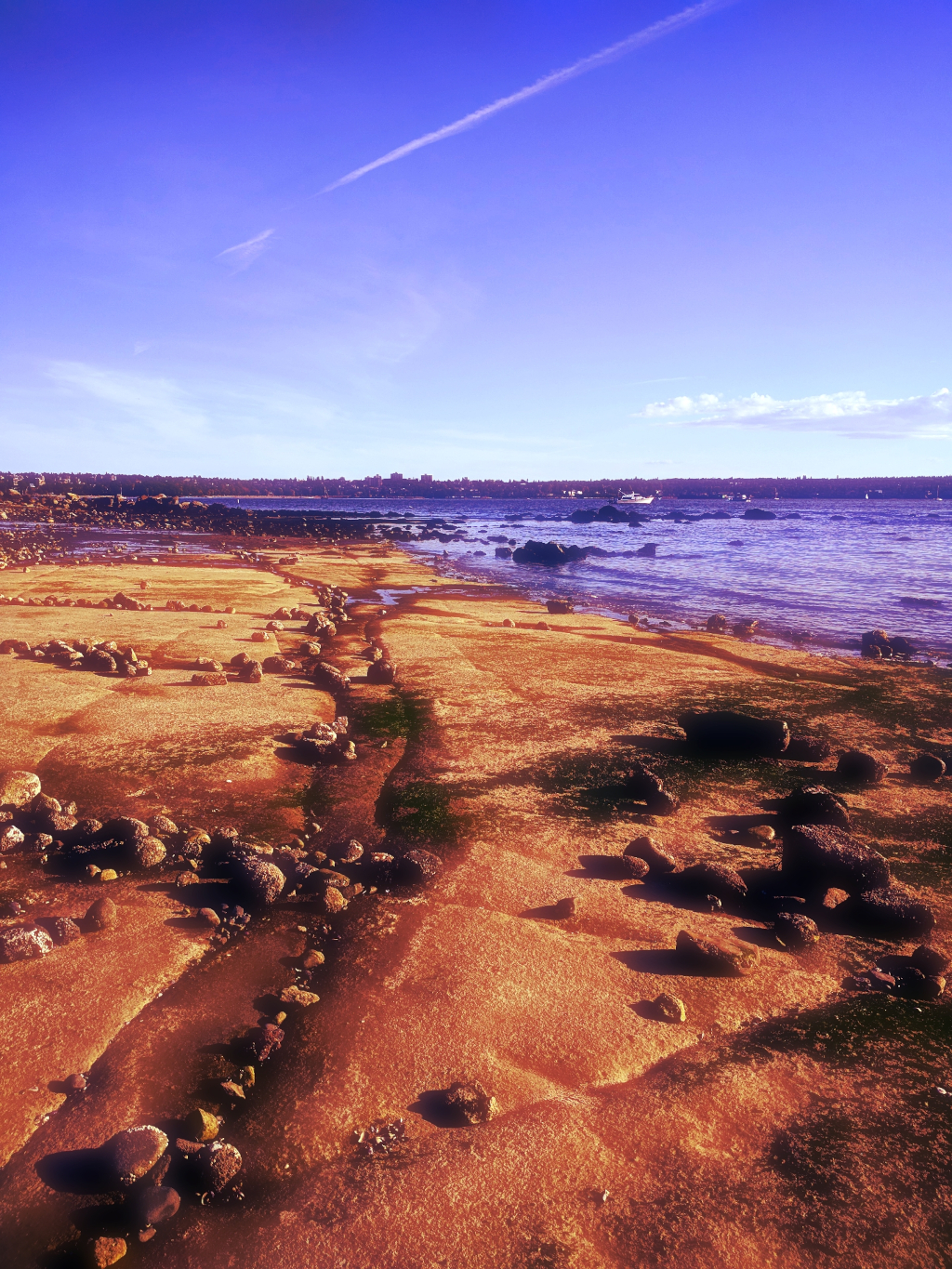 Go on, step into the screen and feel the hard edge of the North American plate beneath your feet. Her tectonic power as she thrusts herself onto Juan de Fuca, conqueror, explorer, and crusher of continents. She grinds and pulverizes the volcanic stones tumbling, melting, rumbling, roused with jagged peaks against the sky. Continental plates colliding in the mid-Atlantic ridge, where she pushes into the depths of the ocean then across under the continental crust, set on fire and liquefied lava flows, relentless planetary conveyor belt driving the gears beneath the face of the Earth- iron splinters aligned north- mounting evidence that they once aligned south, reversals of Earth’s magnetic poles. What do you think of that? Oh, they also coincided with extinction events in which countless species went poof and off the evolutionary flow, unless you’re a Taoist sage who believes that it is all one big algorithm and we never truly have a beginning or an end…hehe...but tell me, what do you think? Oh, yea, keep going, the pearl is near, only $19.99, and she will give you a continental show, a kinky cosmic word, a glowing stick of light, illumination and bubble gum, an earth splintering event that will make the Japanese thankful at the diligent way their ancestors recorded tidal waves centuries ago. Woooosh! she will drop and rise, heaving and thrusting, when you least expect it, somewhere in the depths of the ocean, where the seals and the orcas play with the octopus- then even the salmon will be amazed when the fissures blast wave after tectonic wave towards their cybernetic grids. Cities will crumble. What do you think of that? More? Okay then, here we go, hold on, moving at 25 mm per year, second largest at 76 million km2, and she will hold you in North America, Cuba, the Bahamas, pretty mama, and even Iceland and the Azores, do it in the ocean if you prefer, along the mid-Atlantic ridge again, or the plains in the eastern wilds of Siberia. What say you? Granite core, Jurassic lore, Queen Charlotte’s fault, Nazca lines in the fractured bone, convective current, Yellowstone-Anahaim, baby that’s her hotspot, her mantle plume, the boundary between plates and subduction zones, then off to a night of geophysical romance in the Caribbean sea with a full bright moon and stars shining on your hair, so you'll glide for eons towards the Pacific northwest and rumble and crumble and get really funky down on the west-side, spicy chills and exotic looks, rolling down to the east-side, let's just not talk about it, darling, cruising lights, sushi bars, yoga pants, and the sea of endless faces, to the south side, to the north side, and always further down the road.