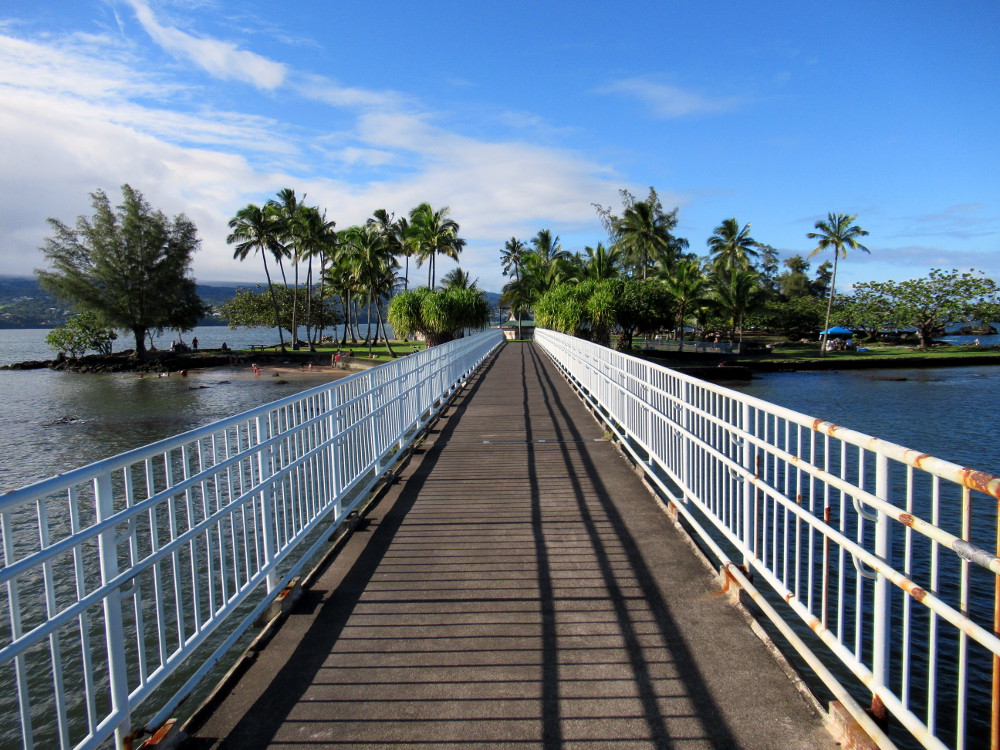 Hilo is a nice city with a population of approximately 46,000 located on the northeastern side of the Big Island of Hawaii. It is Hawaii's second largest city. Touring the city center one day, we wandered into one of its attractions, the Pacific Tsunami Museum.

There are many parts of the world that are prone to tsunamis which are large and destructive ocean waves usually caused by an underwater earthquake or volcano. However Hilo, due to its location, orientation, and its funnel shaped bay, is the world's tsunami capital.

The museum was good. There were witness accounts on video of people who survived the 1946 tsunami which left 122 dead. That included 25 students and teachers at a nearby school. We saw the 'before' photos of Hilo's waterfront and the 'after' photos where it was completely destroyed after being pounded by 2 and 3 storey waves. Although not the only tsunami, it was the most destructive, caused by a 7.4 magnitude earthquake that struck the ocean floor off the Aleutian Islands. The 1960 tsunami left 61 dead.

A tsunami warning system was installed to protect Hawaii after the tsunami of 1946, and a much larger system now protects the Pacific basin. A massive breakwater protects Hilo Bay. The first photo is of the bridge to tiny Coconut Island in Hilo Bay. It's part of the adjoining Liliuokalani Park and a nice place to picnic, swim, and jump off a little tower into the water. 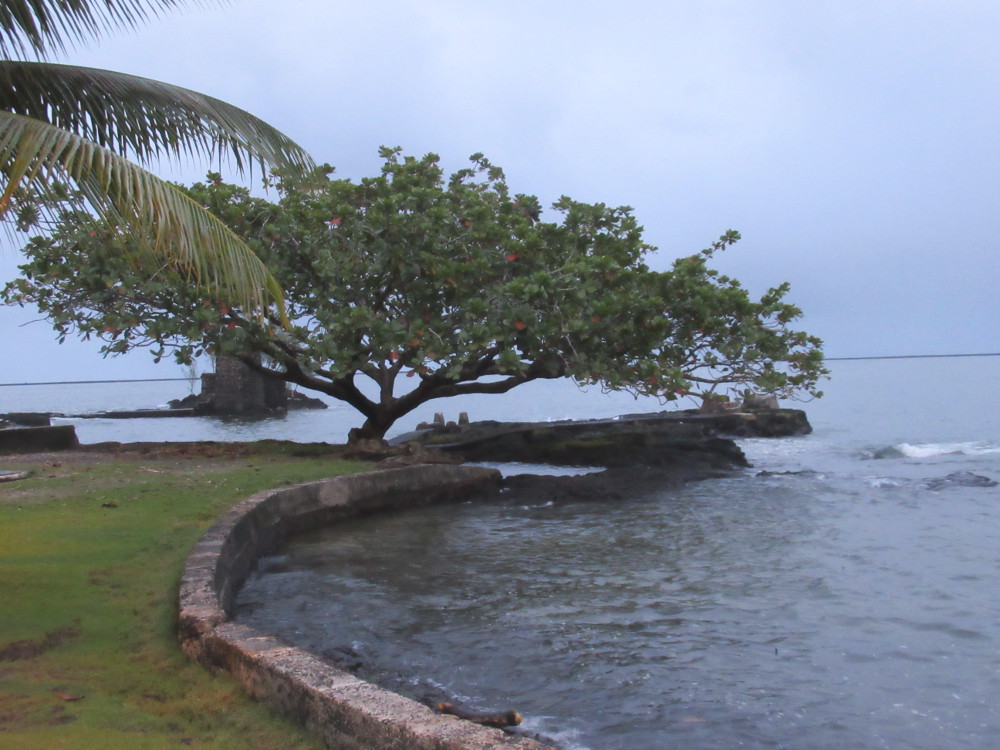 In this photo, taken at dusk, you can just see the tower, a remnant of an old footbridge, behind the tree. It was destroyed by a tsunami. After visiting the museum, we looked at the city differently. Naturally, they didn't rebuild in the large, low lying areas at the base of the bay. That area became parkland and soccer fields. A raised road skirts the bay front also providing some wave protection, but if we had not learned its history, we wouldn't have guessed except for one thing...

Here on Coconut Island we found something that puts tsunamis into perspective; this one coconut palm in the center, above. The tree has metal bands to indicate the high water marks of the major tsunamis that struck here, closeups below.

The Hilo area has been occupied since 1100 when Polynesians first arrived and there is a long history of tsunamis. Between 1900 and 1964, Hilo averaged a tsunami exceeding 1 meter (39.37") every 5 years. As the population increased, the chances of tsunamis severely impacting the population also increased.

In recent years, there haven't been many and the museum plays a valuable outreach role in reminding and educating people about them. Liliuokalani Park is a 9.9 hectare (24.5 acre) park with Japanese gardens, said to be the largest Edo-style gardens outside of Japan. Ponds, bridges, pagodas, statues, stone lanterns, and a Japanese tea house adorn the park. The first 2 hectares (5 acres) along Hilo Bay were donated by Hawaii's former queen in 1907 and dedicated to the first Japanese immigrants who arrived to work Hawaii's sugar cane fields. 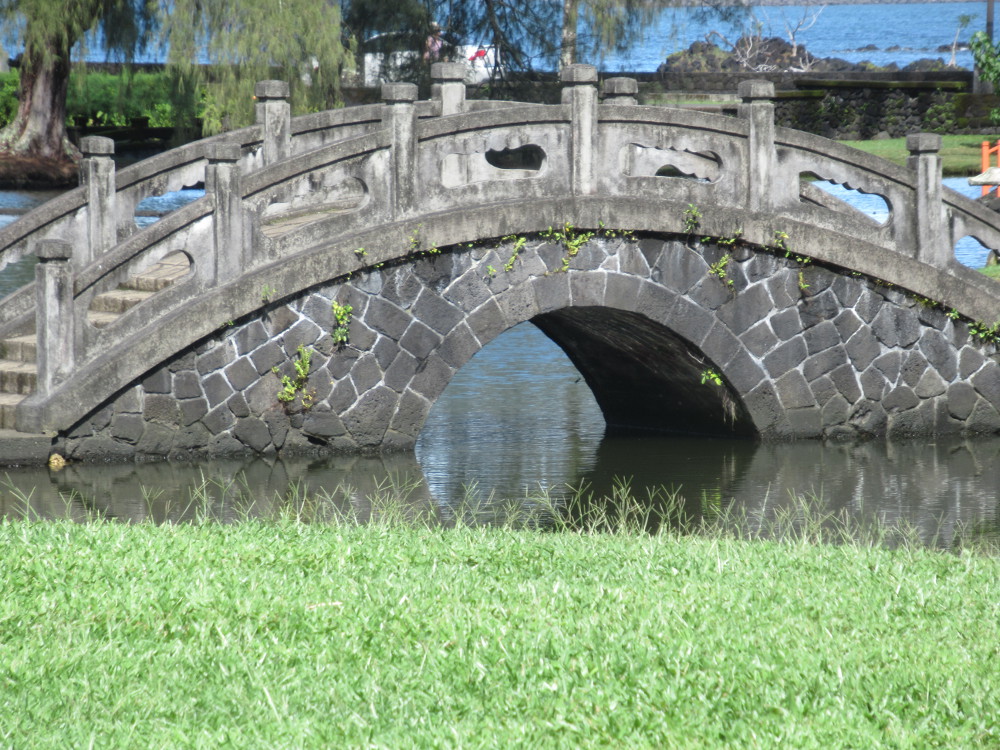 They were built between 1917-1919, suffered tsunamis in 1918 and 1923, and were destroyed by the larger tsunamis of 1946 and 1960. They were later rebuilt. Locals told us how a workers' village had been destroyed and those grounds became part of the garden. It is a serene and quiet monument to them. Higher rainfall on the eastern side of the Big Island keeps the grass green and the foliage lush but a morning rain had muddied the water on this day. 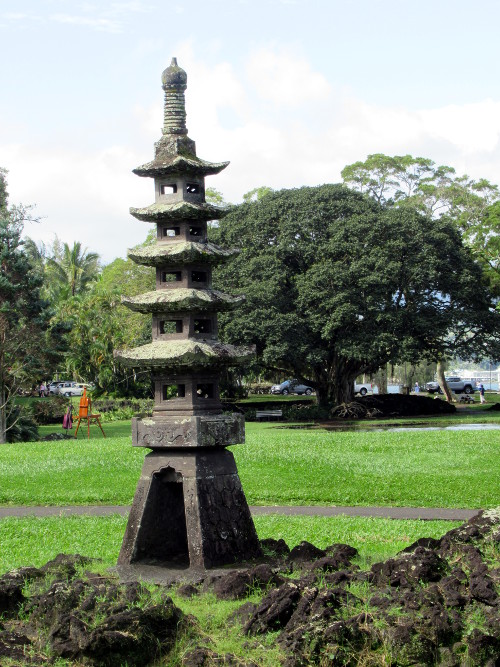 Some tourists come to Hilo specifically to seek out this park. It's located just off Banyan Drive, a short walk from where the larger hotels are found. The locals treat the park with respect and it's large enough that it's never crowded. 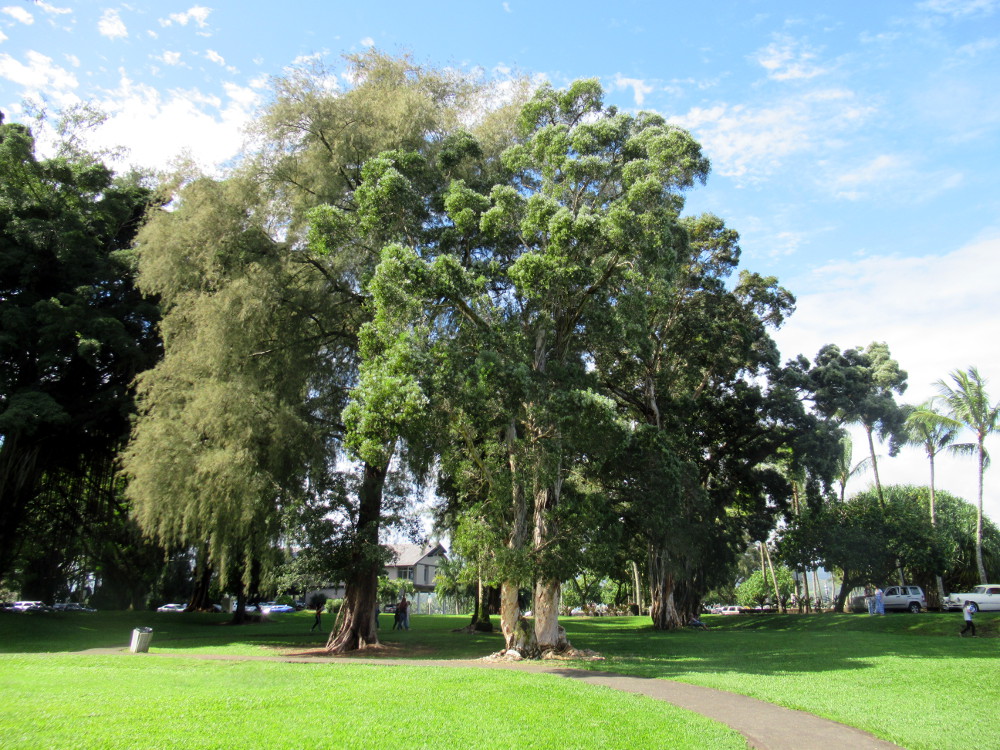 There are jogging trails, wide open places for picnics, and quiet places to sit and contemplate. This area had a plaque and garden to commemorate the American bicentennial. 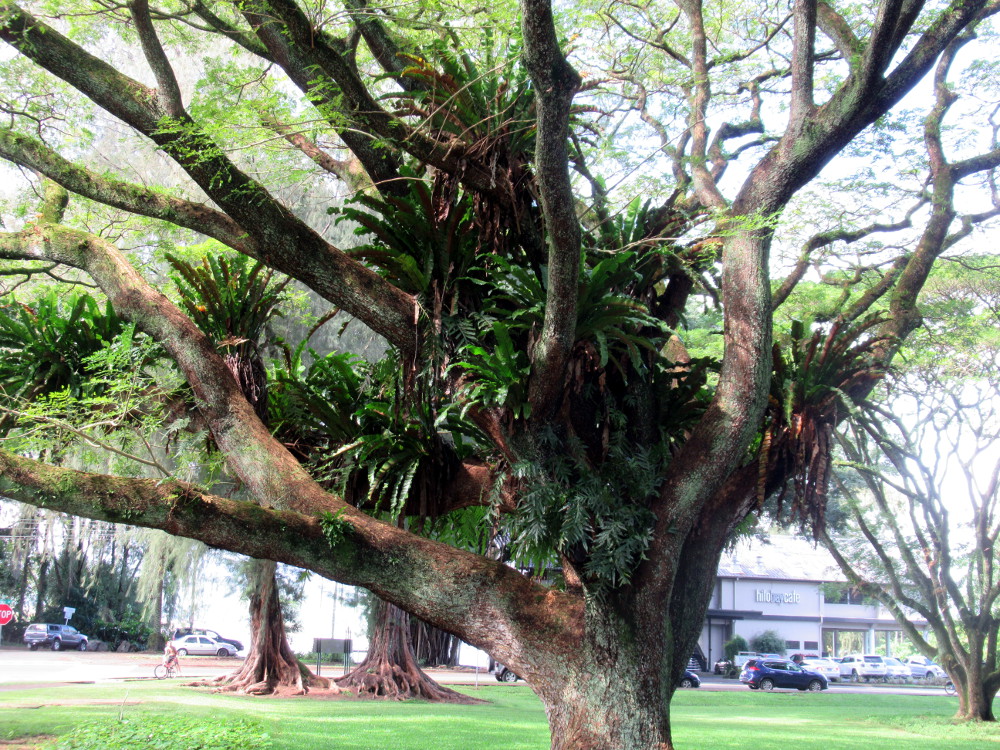 Here is one of the ever present banyan trees with its dangling aerial roots.

Congratulations @kansuze! You have completed the following achievement on the Hive blockchain and have been rewarded with new badge(s) :

Hiya, @ybanezkim26 here, just swinging by to let you know that this post made it into our Top 3 in Daily Travel Digest #1085.

Wow, what a beautiful place. Awesome post, thank you for sharing this and oh my those tree's are amazing.

Yes, Hawaii is beautiful and full of trees. Thank you for stopping by.