Getting to know our species of the animal kingdom / Ladybug Beetle

Greetings again my dear friends of this prestigious platform, in reality we live accompanied by various forms of life, and this is certainly possible to visualize it by looking at our environment, where we will find a variety of species that are an essential part of our ecosystem, and therefore, it will always be necessary to know some characteristics related to these species and thus be able to respect and allow their work in our precious ecosystem.

In this opportunity we will relate in a general way with a small but charming insect which we generally call as Ladybird beetle, Catarina or conchuela, and to see them clearly we would notice its robust, circular or elliptical body, with 6 short black legs like its head and antennae, and it can measure between 2 to 10 millimeters long, maybe each one of us has known this small beetle by its characteristic colors such as red, orange, yellow, black and some white spots, whose scientific name is Coccinellidae.

These insects could be found in any space such as cities, fields, beaches, mountains, gardens, crops, among other places, these insects are considered as great predators in the environment where they are, being their most common food aphids, lice, green flies, among other species of small insects, this aspect makes ladybugs as main allies of people who own gardens and crops.

These insects (ladybugs) also have natural predators such as wasps, spiders, dragonflies, among others, it is important to highlight that ladybugs use their color to persuade their natural predators because it makes them believe that they are poisonous and not edible, for example, when they feel threatened, they can pass as dead, and also secrete an unpleasant substance that allows them to scare their predators and protect themselves.

These beetles at the end of the summer begin to overwinter, this action is done jointly, ie, large groups, and do it in the same place each year, therefore, by increasing the group allows them to have a greater chance of survival in the cold winter, it is important to note that it is believed that ladybugs, Catarina or conchuela, implement pheromones which are released in order to attract each other to overwinter. In relation to its conservation status we can express that this type of beetle is in danger of extinction and this is related to the constant climatic changes as they are very sensitive to temperature changes, for example, when temperatures are very high they die dehydrated.

Ladybugs, Catarina or conchuela, in general, are very loved and recognized by our children, and also in some cultures are considered as amulets for good fortune, we can express that several of these species of ladybugs are considered as biological controllers for those pests that affect the normal development of citrus fruit and apple plantations, but also crops such as barley, palm trees, alfalfa, among others. However, not all species of this type of beetle feed on aphids, mites and mealybugs, and directly attack certain plants such as pumpkins, beans and others.

In fact, one of the most outstanding characteristics of ladybugs, Catarina or conchuela is that many of them are considered as natural or biological controllers of other insects that act as pests to certain fruit plants or other crops mentioned above, therefore, we could know in general some important characteristics of this type of living species such as ladybugs, Catarina or conchuela, and the same as the rest of the living species have an essential function for the balance of our ecosystem. 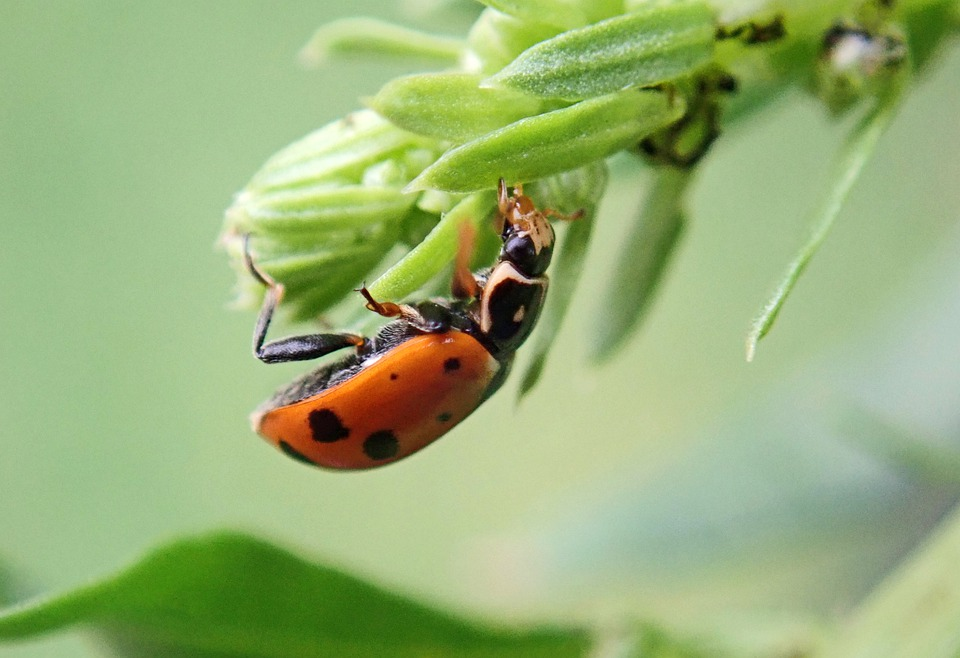 Note: The gif image of this article is of my authorship, and its images were elaborated in Power Point and animated in PhotoScape.