Getting to know our marine species / Clione limacina or sea angel

Greetings again my dear readers of this prestigious platform, in our environment there are different people of great diversity of thought and with it of behavior, this aspect has made of great importance to know about ourselves in order to establish the best possible coexistence, but, to expand our radius of action this characteristic of coexistence is transferred to any living species of this planet Earth.

In this sense we can say that it will always be of vital importance to know as much as possible about any other living species that is around us whether it is on the surface of the Earth or immersed in the deep sea as is the case in this opportunity with the so-called Marine Angel of which we will know some aspects in a very general way.

On this occasion in addition to knowing some aspects of this marine species has also inspired me to make a gif image dedicated to such a beautiful species, therefore, we can begin by saying that this mollusk is inhabiting the icy waters of northern Earth and as you could see in the gif at the beginning of this article its appearance makes us think that if this species came from another ecosystem other than that of our planet.

As a human species we have taken essential and firm steps in the search for knowledge of any living being on our planet, and for this, it is important to say that we have structured vital tools such as the scientific-technological field which undoubtedly has allowed us to reach the depths of our marine waters and to obtain impressive images of these aquatic species and this has led us to have a better treatment towards these species.

Any living species of our planet through time has managed to develop the vital characteristic of adaptation to the environment where they have had to develop their existence and the beautiful Clione limacina or marine Angel is one of these outstanding examples of adaptability, and surely many people on this planet are unaware of its existence, and to observe it we can easily notice that it has a striking transparent body which gives it a spectacular feature and also allows us to visualize its digestive tract among other of its internal parts.

Another feature or aspect that draws attention is that this small mollusk shows upper extremities similar to a pair of wings which allows them to move by flapping, and when observing it, we can imagine as if it were flying in the water, and also this feature allows it to be fast because it can move these limbs (wing-shaped) up to two times per second and thus to catch more easily to their prey.

It is also important to highlight the fact that this marine species Clione limacina or Marine Angel is protandric hermaphrodite, since when they are born they are all males and as time goes by some of them will become females and as for their feeding we could say that they usually feed on slugs as well as different marine worms, this type of marine species does not represent danger for humans or for those larger animals, however, when we refer to their prey described above they are very fierce and effective at the time of hunting them.

On the other hand, we can say that among their natural predators we find whales and some fish such as the Chum salmon, as for their reproduction they do it through a coupling between a pair of these mollusks, where the incubation period can take up to a year, a period of time where the eggs begin to hatch due to this union.

There are many essential aspects of this type of marine species which is part of our precious marine ecosystem, the important thing is to know them at least in a general way and to know that they exist and that they are part of all living beings that inhabit our planet and that we are all necessary for such a desired balance.

Until another opportunity my dear readers. 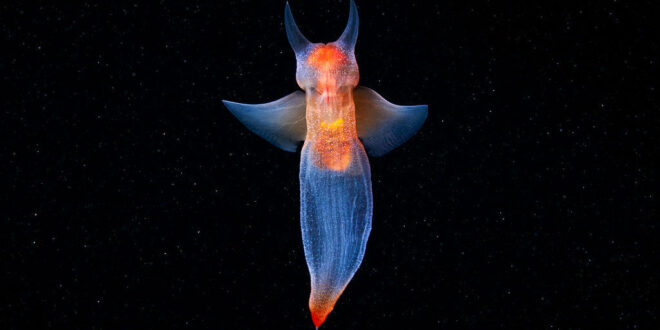 Note: The images in this article were created by me using Power Point and the animated gif was created using PhotoScape.