Einstein vs Tesla: The Time Has Come For the Truth To Be Shown

Many times i have said, "Everything i learned in college science class i later learned was wrong, EVERYTHING!"

And, i am going to try to give a taste of that here.

Which do you believe in: 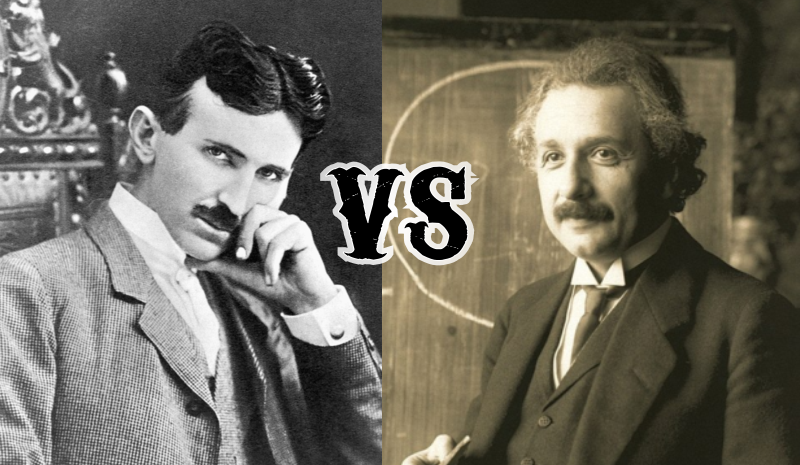 Most people would start off with, "I choose both" or "why do i have to make a choice"?

However, there is no choice. It is a choice between A and Not-A.

Is it really that linear? That black and white?

Now, i will try to explain why these two are diametrically opposed, and why "modern materialistic physics" holds up Einstein as the pinnacle, and never talks about Tesla (except to see he was a fraud)

Atomic bomb (maybe)
A refrigerator (stolen)
A very confusing theory that few can understand.
A theory that can't really be tested.

But our preferences have nothing to do with science, right?

Ask yourself, why hasn't any scientists repeated the demonstrations that Tesla used to give news reporters? Are modern scientists unable to do what Tesla did regularly? So much so that we say that what Tesla did was a scam, a con?

Or, is there another explanation?
That everything you have been taught about modern science is wrong?

You may remember Einstein's main contention was about "spooky action at a distance".
And Einstein's assertion that the speed of light is a constant, and that nothing travels faster.

Fortunately for Tesla
Aether physics is being shown to be more and more correct
The electric universe model explains everything Relativity sorta explained, but better (and a bunch of other stuff), and much easier to understand.

The foundations of the Theory of Relativity are gone, destroyed, disproven.
I could bore all of you with a disproof of every single supposed proof of relativity.
(Relativity was said to be correct because it was more accurate at predicting the position of Mercury. 96%
However, a female astronomer worked out a theory that is 99.9999% accurate, and it doesn't involve relativity)

But even with every supporting pillar smashed, modern materialistic science professors still teach Einstein as gospel.
(as it is a religion, the new state religion)

So, do you believe in Tesla or Einstein?

All images in this post are my own original creations.
#science #tesla #einstein #aether #electric-universe
10 months ago in ecoTrain by builderofcastles
100%
-100%

Thanks for posting great content to the ecoTrain community! Your post has been featured in our weekly curation,, CONGRATS!! Why not stop by and check out a few other posts, theres many great ones this week!

I need to challenge some of your assertions so you can hopefully make a better argument for your case.

Tesla brought us:
Modern AC Electricity True
Wireless Communication He certainly contributed to the field, but many were working toward the same ends simultaneously
Robotics Dubious, although he likely contributed to some Westinghouse projects
(and if we include the ones he demonstrated for newsmen)
Wireless transmission of electricity Dubious, likely highly inefficient if effective at all
Infinite fertilizer Doubtful
Solar power Dubious
100 foot long lightening arcs on command Cool, but irrelevant

Einstein brought us:
Atomic bomb (maybe) Probably, but not just that, also probably nuclear power, which should be the future of electricity
A refrigerator (stolen) Participation level in the project is debated, and credit to other participants in the project seems to have been given
Side note: He also worked with Rudolf Goldschmidt to develop a hearing aid, which is kind of a big deal.
A very confusing theory that few can understand. Incredulity isn't a refutation
A theory that can't really be tested. Yet it has been reportedly tested with the expected results repeatedly...

Your position isn't necessarily wrong, but your examples and evidence do not support your conclusion. You might want to work on that to improve your argument.

So, do you believe in Tesla or Einstein?

This is a blatant false dichotomy. Neither must be wholly accepted or rejected. You haven't actually made the case for the black-and-white situation you presented at the start. What has the Tesla model predicted, and how can Tesla be tested or verified by amateurs better than the Einstein theories? What specifically does it explain that Einstein does not?

Both men may have been grasping at a deeper concept neither understood fully, and we do not fully understand now a century later. It's like the old story of the blind men arguing over what an elephant is. As an example, look at the ancient Greek natural philosophers and the arguments over whether there were four elements or myriad atoms. Now we know there are (at least) four states of matter roughly corresponding to earth (solid), water (liquid), air (gas) and fire (plasma) and also a table of elements with mathematically related attributes and abilities to interact.

Relativity was said to be correct because it was more accurate at predicting the position of Mercury. 96%
However, a female astronomer worked out a theory that is 99.9999% accurate, and it doesn't involve relativity

I would love to see more content about this. At least some sources for further reading would be great 😄

I just have to find her name again, and then the like, one interview she got for upstaging Einstein.
When i stumble on it again, i will definitely write about it.

@builderofcastles! I sent you a slice of $PIZZA on behalf of @vimukthi.

Altogether a different comparison. I would have never thought of comparing these two individuals in rarest of my dreams. But its a beautiful post to read

I think about these two all the time.
Almost to the point of despising Einstein.
And, if you want a conspiracy theory, it looks like Einstein was just the face person to keep Von Braun out of the public eye. Einstein's great, miraculous theory also looks like it was plagiarized.

Glad you liked the post. I tried to keep it understandable and light.