Some considerations on the control of agricultural pests with entomopathogenic nematodes.

amestyj in ecoTrain • 2 months ago
Dear readers, when we refer to entomopathogenic microorganisms we are referring to organisms such as nematodes, fungi and bacteria that present a high pathogenic power on certain hosts, which in this case would be some species of insects, do not represent a danger to man and currently multiply and can be marketed for application, which becomes a cost-effective method for preventive pest control. 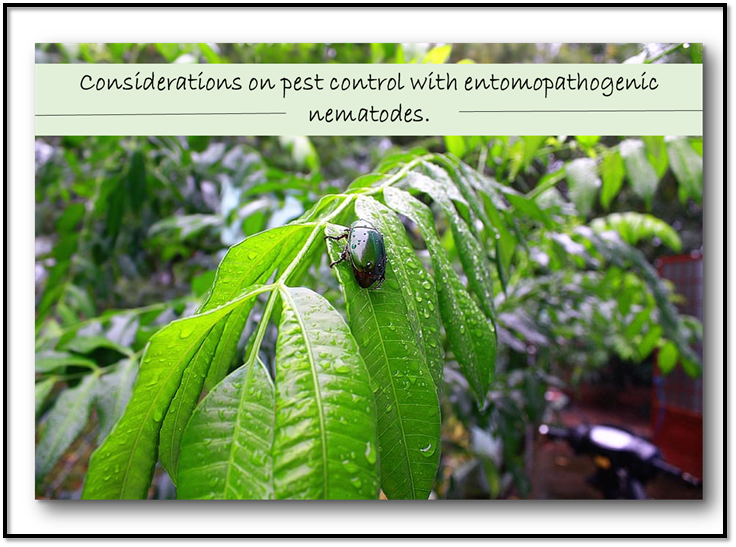 Design by @amestyj with public domain image taken from Pxfuel
As a starting point, it is necessary to mention that traditionally the scope of insect pest control in crops has been governed by chemical spraying programs, which has had a series of results that affect crop production, in addition to increasing costs and reducing beneficial biodiversity. Currently, the objective is to introduce pest controls that allow reducing the application of chemical products and that are complemented with ecological management programs, including microbial control.
It should be noted that microbial control is simply the use of microorganisms or products derived from them created by man to control insect or disease populations, implying that the microorganism or control agent is subject to some type of management; microbial control offers an option for those pest and disease problems that are difficult to combat, since it can complement the action of other control strategies that are not totally effective. This type of control is a low-cost and environmentally friendly option, and the use of products derived from microorganisms instead of chemical insecticides contributes to the preservation of biodiversity.
Image alluding to nematodes Diseño de @amestyj con imagen de dominio público tomada de Wikimedia Commons
Among the entomopathogenic microorganisms are the nematodes which, according to Caraballo (2014), are organisms. They have the ability to parasitize most orders and families of insects, they can be cultivated massively, in vivo on the host insects or in vitro on artificial media and the infective stages can be stored for a long time, retaining their infective capacity. The same author points out that once the nematode has found its appropriate host, it enters the host through the natural openings (mouth, anus and spiracles) and actively penetrates through the intestinal wall or trachea, then releases the bacterium Xenorhabdus sp which causes the death of the host by septicemia within 48 hours, mainly because when it multiplies it produces protein-destroying enzymes.
To make use of this type of microorganism, they can be applied directly to the soil or to the leaves of the plants, according to Zambrano and García (2006) they can be applied by spraying directly on the soil, which they consider a fast and simple method that allows good coverage. The use of these organisms is considered effective, so some researchers recommend that they be reapplied every year.

Dear readers, the use of this type of ecological alternatives brings benefits to the ecosystem from the following aspects.

- Socially:
It strengthens the lines of sustainable development, by allowing agricultural exploitation without affecting the quality of life of future generations.

- Economic:
Decreases production costs due to purchase of chemical products.