Some considerations on El Niño and La Niña/natural phenomena.

amestyj in ecoTrain • 3 months ago (edited)
Dear readers, in recent years there have been some natural phenomena that have considerably altered the climatic conditions in some regions, bringing with them some alterations in the ecosystems such as floods, severe droughts, hurricanes among others, particularly in my geographical area we have a humid tropical climate where rainfall has a certain regularity especially in the rainy season, however, there have been prolonged droughts that have affected agricultural production such as low production of fodder biomass for cattle feed.
Ocean surface 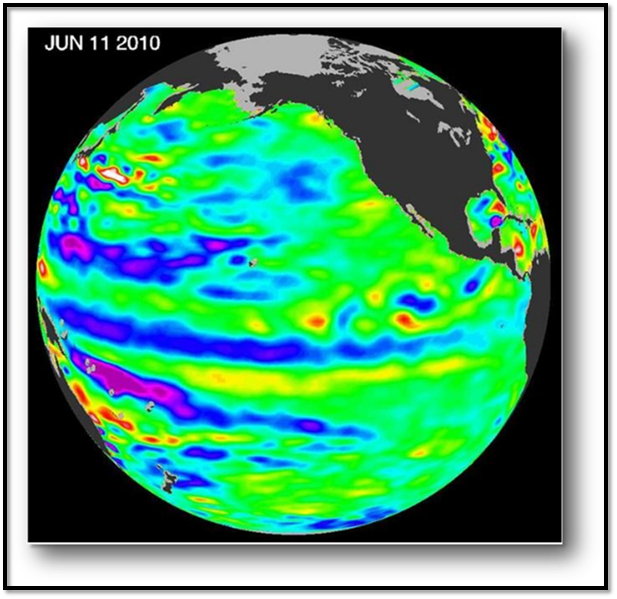 NASA public domain image of the ocean surface Picryl
The climatic conditions mentioned above have been attributed to two phenomena known as El Niño and La Niña. According to the literature consulted, these phenomena are due to the alteration of the waters of the Pacific Ocean; the first (El Niño) is caused by the irregular warming of the surface waters of the ocean and the second (La Niña) is due to the irregular cooling of the surface waters of the Pacific Ocean. In this sense, climate change specialists such as López (2013), point out that the warming of the Pacific Ocean waters is due to the weakening of tropical winds, which causes temperate waters to exceed cold waters, causing moisture to be released into the atmosphere and this moisture can be the cause of flooding in some arid areas.
As for the "La Niña" phenomenon, the same author mentions that in this situation the trade winds are more intense, which causes a greater amount of cold water to be dragged towards the eastern part of the Pacific Ocean, causing a drop in temperature and aridity on the American coast. Undoubtedly, these abrupt changes in climate can have adverse effects on public health due to the high relative humidity in some cases and also natural disasters, in addition to the low productivity in the agricultural sector as mentioned above.
The following are some of the effects of the El Niño phenomenon on productive activities, economy and public health as reported by Hijar and collaborators (2016):

Design by @amestyj
Finally, I would like to point out that the name (the child) is due to the fact that the fishermen of the coast of Peru and Ecuador observed the change in temperature of the sea at times close to Christmas, therefore, they called it the child, alluding to the baby Jesus. These phenomena have been extensively studied due to the fact that such climatic changes significantly affect some sectors as mentioned in the article.
Hijar, G.; Bonilla, C.; Munayco, V.; Gutierrez, L. and Ramos, W. (2016). Phenomenon el niño and natural disasters: public health interventions for preparedness and response. Peruvian Journal of Experimental Medicine and Public Health, vol. 33, no. 2.
López, V. (2013). Climate change and global warming. Trilla: Mexico.